I came into this review expecting to dislike this game. The screenshots make it look like a pure bullet-hell and because I'm terrible at those games, I often don't enjoy them. Somebody needed to review it though so I decided to have a try and see if I could get far enough to do it justice. Turns out that was a great decision, as I shall explain in the following paragraphs.

Whilst there are bullet-hell elements to Stellar Interface, at heart, it's a procedurally generated shooter. With gorgeous pixel art graphics and a super funky chiptune style soundtrack, you can see that the developers have aimed for a game that feels like it's from back in a 90s arcade. The only thing missing is the smell of stale cigarette smoke and sticky elbows from whatever lurid substance the last player spilled on the cabinet.

Looks can be deceiving though, and like a reality TV star with a PhD, that simple outward appearance belies a very deep and complex game. There's so many customisation options, it's possible to spend a significant portion of the game just tweaking your ship and loadout to meet the challenge ahead. 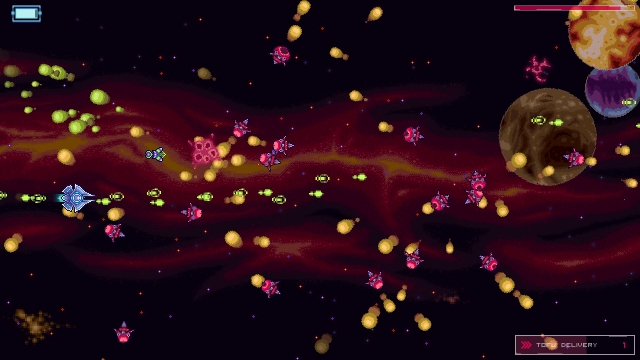 You begin with just one ship and a few weapon options, and runs through the game will earn you additional ships and enhancements that will improve your chances of survival. You can choose the route you take through the game by selecting which order to tackle the levels in from a limited path, meaning you can choose to rush through as quickly as possible, or take your time and slowly build up your arsenal. This can be done in a number of ways, but mainly through software upgrades that increase your stats, add additional functionality, or add drones that fight for you or heal you. The latter were my favourite, with certain combinations giving me a veritable army of tiny friends to do my bidding.

Each level has a percentage chance of being a factory, a vendor, or a Lost Lord. Factories allow the unlocking of additional ships, vendors allow you to upgrade or otherwise change your weapons, and Lost Lords are the game's bosses. You get a "threat level" as well, which indicates how hard the level is likely to be, with more difficult levels giving greater rewards. The final level in a run is always a boss, and defeating them means that in future runs they become a regular Lost Lord, with a more powerful boss replacing them in the end game.

It's this extreme level of tweakability that makes Stellar Interface so addictive, and once you get the hang of the mechanics you'll start getting slightly better results each time, with defeats just serving as a means to get a chance at a bonus upgrade to start the next game with. It's also these upgrades that mean that as the bullets start to get faster and more numerous, they aren't as overwhelming as they might look in screenshots of the game. It makes for a brilliant difficulty curve, which is something that very few pure bullet-hell games have. 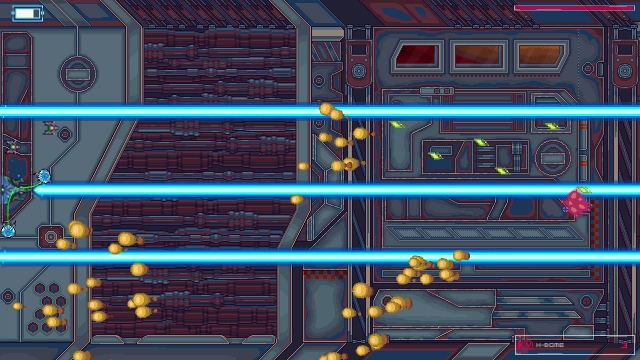 All of this results in an incredibly satisfying experience. As you get more powerful, so do the enemies so your screen full of bullets is often met with a return volley, but you never feel completely overwhelmed and when you lose, it's likely you'll blame yourself for mistiming a move and go straight back in for another go. This is a game that gets the balance just right between being difficult, but not so much so that practicing it is a chore.

In all, I must have sunk somewhere near 60 hours into Stellar Interface and my editor is probably despairing at how long the review has taken, but contrary to initial assumptions, it's not because I took that long to beat the first level. The accessibility of the game makes it a brilliant induction to the often impenetrable bullet-hell genre, and the variety of different options, combined with addictive gameplay that keeps you coming back, makes it one of my favourite Switch games of 2019 so far. 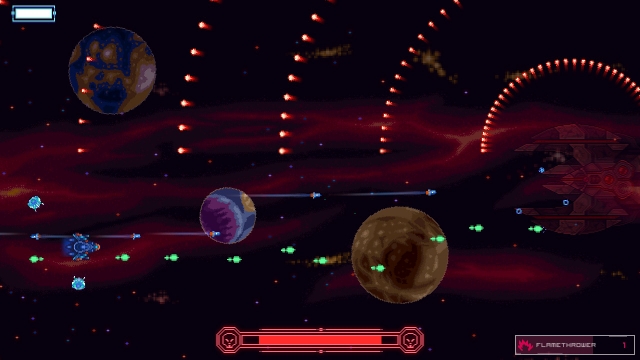 The accessibility of Stellar Interface makes it a brilliant induction to the often impenetrable bullet-hell genre, and the variety of different options, combined with addictive gameplay that keeps you coming back, makes it one of my favourite Switch games of 2019 so far.