There’s a war in heaven and I’m trapped in the middle of it. Two huge fallen empires have turned up in the middle of the galaxy and started duking it out as if it hasn’t been millennia since they last fired a space-missile at each other. Caught between a nuclear-armed rock and a laser-spurting hard place my fledgling empire of pacifists is sat right in the centre of this epic conflict. This is just one of the ways that Stellaris’ new Leviathans DLC pack adds some spice to the 4X space title.

In case a war between ancient foes doesn’t for you, Leviathans also adds a range of new exotic and powerful creatures named “guardians” that sit, kraken-like, in gravity wells and (usually) bide their time. The player can choose to research or battle them for exclusive bonuses, though the latter is usually inadvisable. The guardians can be massive in size and are pretty darn irritable. One small burst of laser fire from a scout ship - a mere bite of a flea, really - and they’ll rain all kinds of trouble on you. The guardians are epic in scope and bring all of Stellaris’ fantastic visual quirks together - watching a huge space-whale with glowing orange eyes float over the radiation bursts of a red dwarf sun is really quite something - even if it;s annihilating your best fleet in the process.

Leviathans’ main objective seems to be giving the galaxy you explore - which in the vanilla game can sometimes feel a little empty - some much-needed history and lore. In your travels you will also come across enclaves, scattered remnants of once mighty civilisations living out their days on giant space stations. They’ll appear in a few variants (each with a unique style) but usually are interested in art, culture or trade. If you please them enough, through trade, commissioning them to build monuments or giving them information your empire can receive some hefty benefits. After spending a lot of my time exchanging information with the an enclave of secret-loving mollusc people they eventually gave me the secret to defeating a guardian that had been sat in the middle of my trade lanes for a few decades. 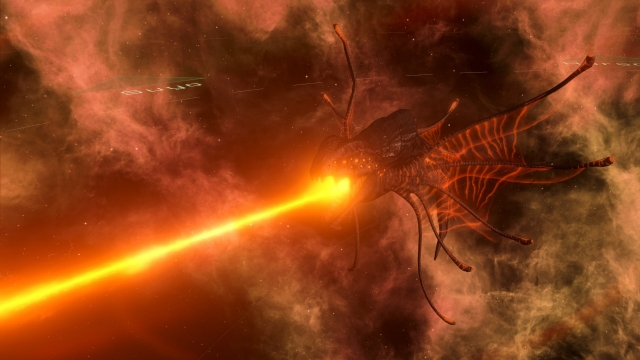 I mentioned the War in Heaven at the start but perhaps I haven’t given it the gravitas it deserves. By the time it emerges there should already be a number of established galactic republics, empires, kingdoms etc. including the player’s. When the two mighty slumbering forces awake, you’re essentially told to pick a side. It’s like being asked if you want to join the Reapers in Mass Effect - the decision has enormous weight. Every faction currently large enough will be given the choice and old alliances can be shattered in moments. Alternatively, the player can attempt to create a league of non-aligned empires in a fight against these massive enemies. Going neutral is always an option, but as I found out when I attempted to remain a pacifist on the sidelines, when one side wins they’ll come for you next.

Leviathans is a DLC pack that really adds some meat and bone to Stellaris. It attempts to add to the feeling of discovery the player gets when first reaching out for the stars by rewarding them with the dying remnants of old empires and the challenges of titantic other-wordly life. It also adds some flavour to the mid and late game - a section that I called a drawback in my review of the game - where things can become a little stale. That, perhaps is where a problem lies - Leviathans is filling in a section of the game which may have stopped you from playing it all night long. As it is, the DLC keeps things ticking over and builds on that “just one more star system” or “one more battle” feeling the game so perfectly creates.

Leviathans is a DLC pack that really adds some meat and bone to Stellaris. It attempts to add to the feeling of discovery the player gets when first reaching out for the stars by rewarding them with the dying remnants of old empires and the challenges of titantic other-wordly life.