Gentle breeze, babbling brooks, thoughtful puzzling, and teeth-clenching frustration. These are the things that sum up my time with Storm, a 2D puzzle-platformer from Eko Software. This brain-teasing indie title entrusts you with the elements of nature to guide a seed from its mother tree to a fertile patch of soil, causing the humble seed to sprout into a new tree.

Storm begins in spring, with only the powers of wind and water made available to the player. Using a cursor to place and aim the powers, early levels have you positioning gusts of wind to push the seed across rocky hills and grassy plains, and summoning rain showers to flood caves and float the seed to high places. 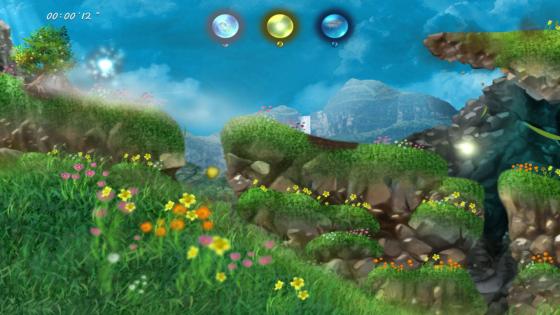 As you progress through the game, the world shifts through the seasons, and each season bringing with it an additional - albeit increasingly less useful - elemental power. Summer ushers in the ability of lightning which can be wielded to destroy weak sections of the environment, ignite a wildfire, or if timed correctly, to launch the seed in the air. Autumn introduces the tornado power which can carry objects across dangerous terrain. Finally, the coming of winter allows you create snow which acts as makeshift platforms for the seed.

The lightning ability is easily the most versatile and fun of the later additions. One level in summer has you starting a wildfire with lightning, using wind to waft the flames to burn a tree trunk that blocks the path to the exit, then washing the seed to the exit with a flood, putting out the fire out in the process. This is just one example of how Storm's abilities can be combined and stacked, and experimenting with them is just plain fun.

The level design in Storm is fairly linear with each level having one 'correct' solution, but it's sometimes possible to cheat the system and find a solution that was probably not intended by the developers. On occasion I was able to skip sections - or even the entirety - of a puzzle by using the lightning ability to jump the seed over a wall, when really I was supposed to push it in the opposite direction. 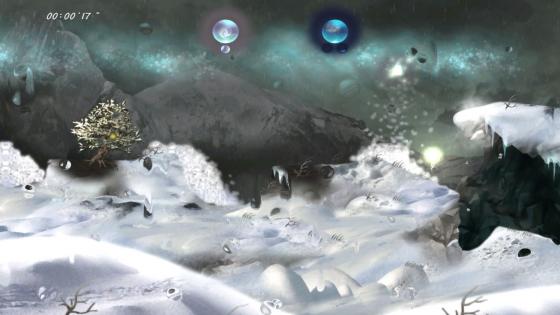 As mentioned earlier, trees act as bookends for each puzzle, but some levels also include mid-level trees. These effectively work as checkpoints: if the seed is destroyed it will return to the last tree it fell from, or alternatively the player can return the seed manually by with the press of a button. Frustratingly, checkpoints only save the seed, and any changes made to the environment persist, meaning if you've accidentally triggered a landslide too early and blocked the exit, you'll have to restart the puzzle over. This is a bigger problem in autumn and winter, where it feels like you are punished for experimenting, as opposed to the first half of the game which rewards you for doing so.

From a presentation standpoint, Storm is the digital equivalent of a trek on a nature trail. The colourful landscapes are gorgeous and feature clever visual details, such as leaves floating on gusts of wind and raindrops splashing on the screen. Storm's audio design is slightly less impressive however, with the in-game music consisting of one fairly dull piano loop for each season. Some realistic ambient sound effects add to the immersion though.

While Storm's presentation gives off a relaxing atmosphere, this feeling is replaced by frustration at the fast-paced, timing-heavy challenges that appear later in the game. While the new abilities may sound good in theory, they don't work so well in practice. Controlling tornadoes is awkward, and creating snow ramps accurately is nigh on impossible. Generally, the game's control scheme and inconsistent physics engine don't seem like they were built to support the precision required in autumn and winter. 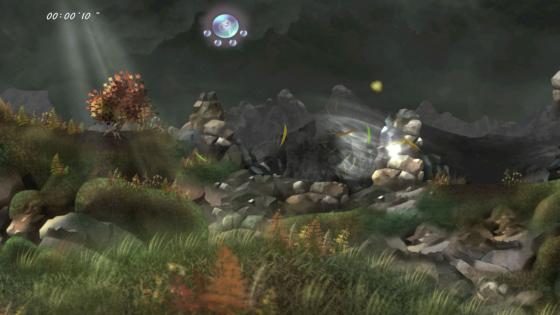 Platforming sections that utilise lightning in later stages of the game are particularly irritating: lining up a lightning strike so it launches the seed in the correct angle is very difficult, particularly when the seed is moving at speed. This frustration could have been avoided with the addition of a time slowdown button. A fast-forward mechanic has been added to speed up the power recharges, which makes this stand out even more.

Aside from the short campaign mode, there isn't much else on offer in Storm. Eko Software have included Free Mode (which is effectively the same as the campaign besides the addition of a timer) and Spirit Mode (basically Free Mode with the addition of floating orbs that must be collected to complete the level). Neither of these modes offer any new puzzles to ponder, nor is there any leaderboard support, making both the additions feel pretty pointless.

Storm has some great ideas, and the game's premise could potentially make for an exceptional puzzle game. Despite a lacklustre second half, the unique game mechanics combined with sensory pleasures that rival That Game Company's Flower add up to a title that offers occasional thrills for puzzle fans, but isn't likely to set the world on fire.

Gentle breeze, babbling brooks, thoughtful puzzling, and teeth-clenching frustration. These are the things that sum up my time with Storm, a 2D puzzle-platformer from Eko Software. This brain-teasing indie title entrusts you with the elements of nature to guide a seed from its mother tree to a fertile patch of soil, causing the humble seed to sprout into a new tree.