After visiting once 20 years ago, you must return to the land of your forefather, and decide whether you wish to take on the massive responsibility of tending crops and animals. Of course, you could say no and be immediately treated to the credits screen. 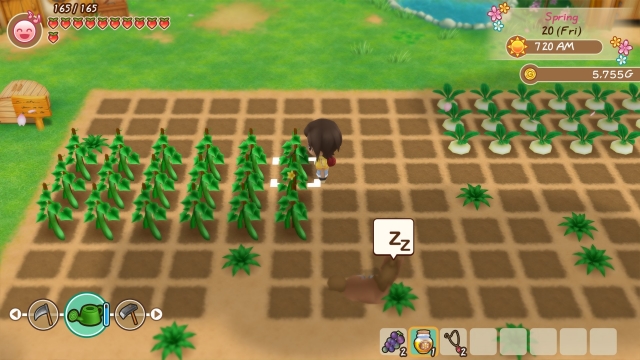 So, as a mashup of two games, Story of Seasons: Friends of Mineral Town (SoSFoMT) lets you pick between two boys and two girls - well, since you’re in your mid-20s I suppose it’s men and women. However, you and all of your romance options look very young because of the art style… Once you’ve moved in, you can get on with whatever you want to do.

You can plant crops, have chickens, cows and sheep, and fish the local waters. Your normal farm stuff. You can also go into the cave system to break rocks and hoe the ground to find ladders which lead you deeper into the cave. Finally, you’re free to go around town talking to people and giving them things, which will make them like you. Eventually you can marry them and have kids according to the manual.

I say that, because I sunk quite a bit of time into SoSFoMT and didn’t manage to get anyone to marry me. I would assume it’s straight couples only, because playing as a woman I tried like hell to get Jennifer to fancy me… 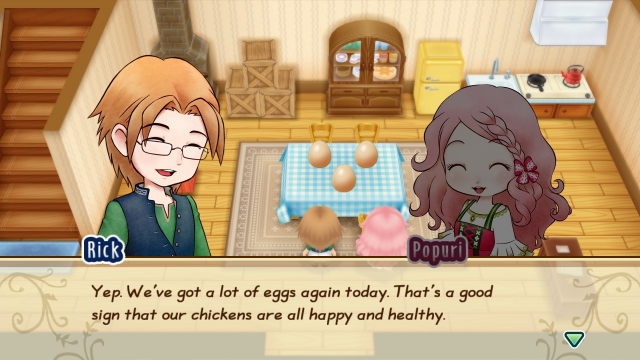 The game follows a calendar, where each month is a season. Certain things only grow in certain seasons, except for Winter where nothing grows. As you start the game in Spring, you should start planning ahead for that as soon as you have a bit of money under your chicken coop. A whole month of being unable to make money from crops or fishing is a long time to bet the farm.

To break things up there are festivals, which you’re usually reminded about when you leave your house the morning before it, in case you’re not keeping an eye on your calendar. Then, you have to get to the right spot at 10am the next day to participate. Or waste an entire day, in the case of the first Fetch Festival… There wasn’t even a cutscene to watch… But after a year or two you should have enough experience and have unlocked the right stuff to participate in them. 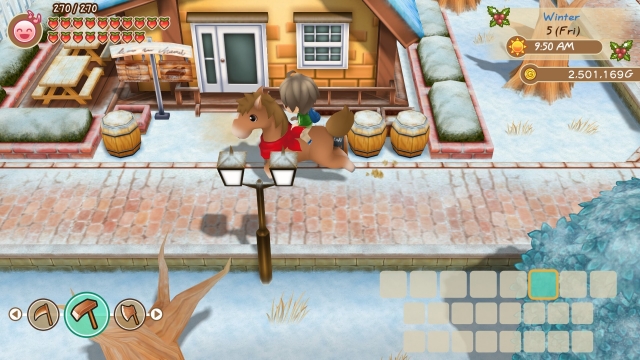 At home you can watch TV. The main thing you’ll want to keep an eye on is the weather, which tells you what tomorrow will bring, allowing you to plan ahead. There are also entertainment programs, such as cooking shows which teach recipes, news telling of the days ahead, and educational shows about the game itself. “Tell me how to select things in my inventory, sis!” - super subtle things woven into the fabric of the television.

SoSFoMT is a great looking game, with adorable graphics in a cartoony style. The stream babbles, the view from the top of the mountain is picturesque and every character looks unique.

The music is suitably upbeat and jaunty, except when it gets to 8pm and everyone starts going to sleep. I was pleasantly surprised that the villagers (a population of ~30 doesn’t count as a town) didn’t have a stupid nonsense-language like The Sims or Yooka-Laylee, they just silently fill up text boxes for you to read. The animals make suitable noises, filling out the world nicely. 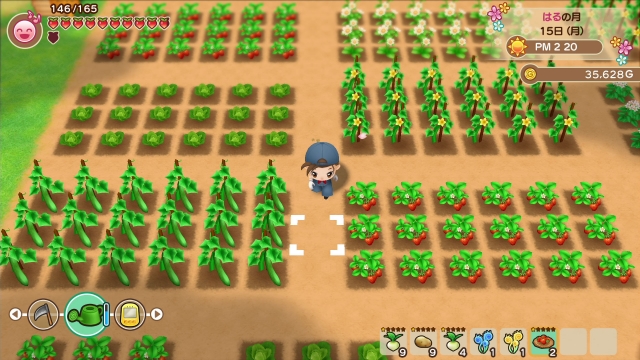 There have been more than graphical and audio updates, as SoSFoMT has also changed item placements and some events. At least from what I could tell, trying to cheat by using the Story of Seasons wikia. Events occur at set times on set days in certain locations, so unless you’re following a guide you might not accidentally stumble across two characters chatting by the river at 6pm on a Tuesday. Unless you happen to leave the cave at that time. That was just an example, I can’t actually remember what time or day that happened…

I will admit that I kept stumbling on events in the clinic, because I was trying to woo the nurse and the doctor… I didn’t want to put all of my eggs in one basket with Jennifer. They’re nice breaks to the cycle of “wake up, feed/talk to animals, water plants, visit shops, interact with people, play games with the Nature Sprites fish/mine/chop wood, sleep”. It can be relaxing, but also monotonous - it depends on your view of farming games. 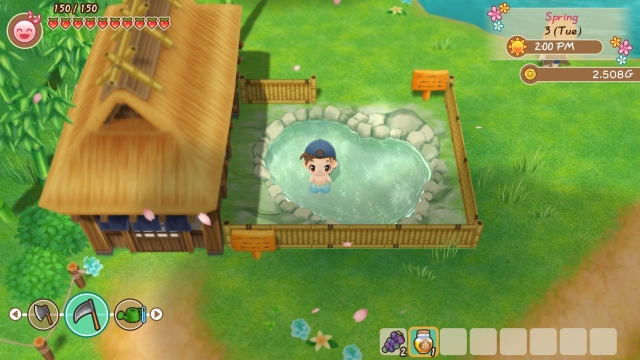 Which I suppose is what it comes down to. Story of Seasons: Friends of Mineral Town is an enjoyable experience. If you’re after a farming game, this is the cream of the crop. There is even enough structure to keep me engaged, someone who loves games telling him what to do and hates games with too much freedom. It’s a well put together game, a brilliant remake and is a good addition to your Switch library. However, if you don’t like farming games, there is no way that this will sway you.

A relaxing game, a brilliant remake, and if you like farming games you’ll be happy as a pig in mud.

When you have a festival you can show up at the last minute. Check your calander for the time and place. Most are 10am-6pm. Than enter that place at 5:50 pm (per example). The festival will commance like normal and you'll get out at 6pm without wasting a day. Cooking festival has two parts. Theme selection (10am-noon), contest (noon-6pm). So show up at 11:50am and 5:50pm respectively.