A good kart racer that isn’t developed by Nintendo is looking less and less likely every day. I mean, sure, you could probably go onto a forum and say “hey, you know what, I genuinely think Garfield Kart - Furious Racing has some great design choices”, and what are you gonna get? A mouthful of gasps, hands showing you the door, and Nermal stans telling you not to listen to them. Still, Super Toy Cars Offroad can be another attempt, if nothing else.

This is the third release in the Super Toy Cars series, and the latest product from Spanish developers Eclipse Games. Cutting their teeth with the twin-stick shooter Tachyon Project, Eclipse Games has found more invigorating success in this table top-racing series, despite several voices decrying the game's lack of technical prowess. A shared detriment of the series is the focus on quantity over quality which, if you’ve played the games before, can be a worry going into the newest title.

There’s no plot, just a ton of action figures ranging from non-descript Barbie dolls to buff dudes with bad articulation all looking for a win in the races. You’ve got a wide array of characters to unlock, and a wide range of vehicles to try out, varying in size and categories. Whether it’s quad bikes with a focus on speed and precision, or figuratively large monster trucks that rely on brawns over brains, there is a decent mix here. 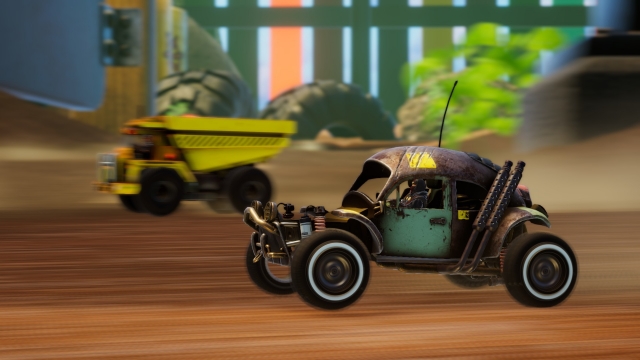 The driving in Super Toy Cars Offroad has an admittedly high skill ceiling, with it coming down to both precise driving and a lack of transparency. Like all kart racers, the focus is on winding tracks to take advantage of drift boosts that’ll have you speeding out of corners to overtake with elegance. Due to the off-road nature of the game however, you’ll simply just start braking instead sometimes, throwing you for a loop as to whether the game works as intended. As time goes on, that may be the case, but in due time.

The game hosts varied locales you can race on, but almost none of them evoke a Micro Machines-esque funhouse romp. You’ve got sandpits and gardens, frozen lakes and dirt-bike tracks, but none of them relate to the nostalgia Eclipse Games themselves want to extract from the player. It doesn’t feel like I’m blasting my Matchbox die-cast racecars with dodgy wheels through my bedroom and dirt, it feels like I’m zoomed into one specific part of the map on Fallout: New Vegas.

Are there strategic implementations regarding which vehicle you can and should use? Yes, sometimes. All of the events in-game specify which vehicles you’re allowed to use, but this goes right down to the track designs themselves. Every track hosts shortcuts that allow for quicker times, but some cars simply won’t be able to drive through them quickly due to their lack of viability off-road. It’s an obvious — albeit stupid — mechanic, betraying the idea that some of these cars, despite their off-road nature in real life, don’t have the same viability in the game. 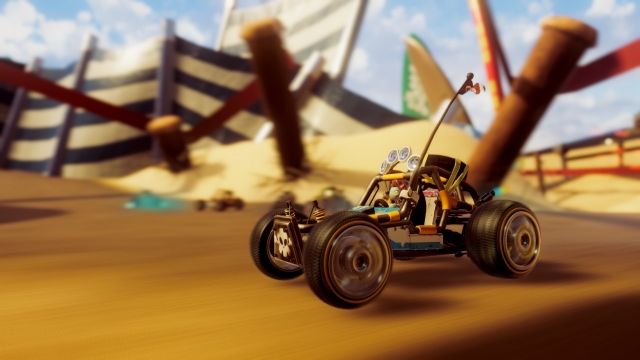 This may sound like nitpicking, but let me put it like this: The game has a starting car that is quite obviously based on the Lancia Rally 037, the last RWD vehicle to win the World Rally Championship. In four seasons between 1983-1986, it had one first-place finish, two second-place finishes, and one third-place finish in the WRC Manufacturer’s results. Lancia are known for their rallying capabilities, even today, 40-odd years later, but their tribute in Super Toy Cars Offroad is one of the worst-performing cars off-road? Really?

It’s tough to gauge how any of the vehicles are going to perform on truly off-road shortcuts, even with the stat meter the game provides when showing you how each vehicle performs. You’ll always seem to slow down, although this doesn’t seem to bother the A.I at all. A truly exceptional showcase in not bothering to add variables in their performance, the A.I in Super Toy Cars Offroad will always take the most straightforward option, to the point where if you’re in their way during a race? They won’t attempt to navigate past you, they’ll just bash into your car until you’re gone or they swerve off.

The game reeks of not being balanced properly, from the A.I behaviour to the times and scores you sometimes have to beat. Super Toy Cars Offroad hosts a varied stash of game modes ranging from races allowing power-ups or not, time trials, and drifting challenges based on score, but the thresholds for the scores you have to beat are insultingly easy. In comparison to some of the races on offer, it almost feels bittersweet to get a first-place finish on a challenge that can have you beating the score of the second-place opponent by several thousand points. 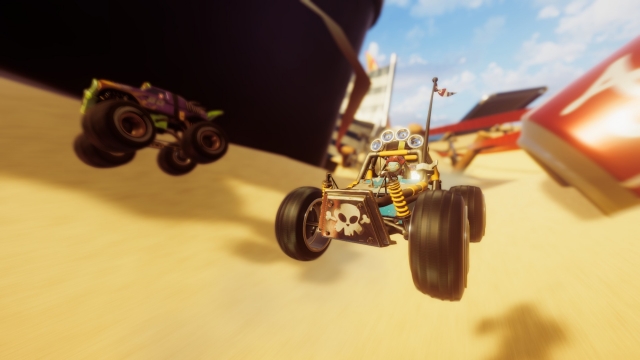 Still, it’s not as bad as having to put up with actual races against other A.I opponents, as you attempt to fight back with one of the most useless and meagre offerings of power-ups you’ll ever see in a combat kart racer. Out of eight power-ups, with five of them showcasing attacking properties, not a single one shows feedback in collisions, destruction, or flair. Particle effects merely happen and you may or may not have done something. You won’t be able to find out though, because your console might've bricked.

Thus, we come to Super Toy Cars Offroad’s most egregious offence, and that is the unbelievably poor technical qualities of the game. Graphically, the game isn’t a trailblazer, and neither is its visual design, but that still won’t stop frame rate drops, seizure-inducing graphical glitches, and the type of crashes you don’t want to see in a kart racer. My console had to be hard reset twice in separate one-hour sessions of the game due to supposed overheating, during which my poor Xbox One S “Sandra” was screaming for me to play something — anything — that wouldn’t put her through this pain.

Super Toy Cars Offroad is an anomaly in design, structure, and optimization. In its current state, it is nearly unplayable due to poor A.I, ruinous glitches, technical shortcomings, and awful physics, but this needs more than a re-think. After three games, it seems like no lessons have been learned, and Super Toy Cars Offroad does nothing but treads the same broken and dirty road its predecessors have.

One of the worst kart racers to be released in recent times, lacking decent track design, tight controls, visual flair, fair A.I, and is far from an optimised experience. Hideously broken on almost every level, this is something a “simple patch” cannot remedy.