How would you react if a dishevelled, nervous looking woman showed up at the doorstep of your office, just as you’re about to start work on the numerous projects and deadlines you’ve got? You invite her in to see what this is all about, but the sales pitch includes taking you into the future and explaining how she’s actually “immortal” (more on that later), with an extra plea for help to solve some problems? So how would you feel? Confused? Angry? …Aroused?

Okay, that last emotion was probably too far for most of you, but this is the introduction you get to Supposedly Wonderful Future. It’s less of a game and more of a short story presented in a graphical medium. You’ll not be moving around much, so for pretty much the whole of the game you’re either reading or responding. If this is not for you, then you might as well go back to the GameGrin homepage and catch up on some other news instead. 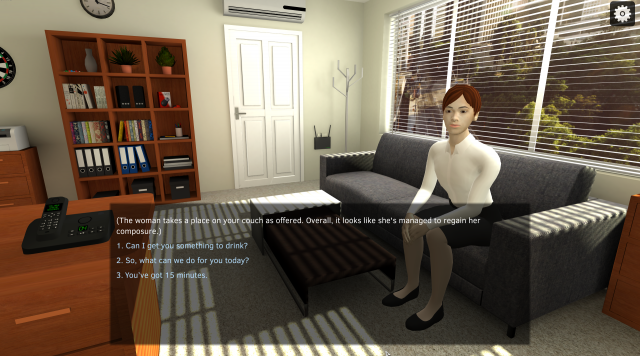 Much of the actual story is told through Jackie, an employee of LIFE+ as Michael is plopped into the year 2048. I mentioned immortality earlier, but that isn’t strictly available at this time. What is, however, is the ability to stop aging. Through the background of solving some puzzles, the conversations you have with only a select few other people deals with the benefits that it has brought, like the liveliness that the populace can new feel at 80 years of age, and the drawbacks and problems that it may cause.

There are five problems that you have been taken to the future to help solve from an outsider’s perspective. Without going into too much detail, the first has you thinking right off the bat about euthanasia: is it morally acceptable to lay those to rest who are no longer sound of mind? Or in the case of Supposedly Wonderful Future, the elderly who think they’re children? The case after sees you trying to catch a cyberbully, interviewing suspects through a “video feed”. I presume I found the culprit – I instructed the lead investigator to arrest my chief suspect, who apparently then pleaded guilty. Only to be told later by Jackie that they hoped it was the right guy, and she would just have to trust my instincts. Thanks for the confidence boost.

The problems that you’re presented with probably won’t cause too much headache. This second cyberbullying case is the only one where you actually need to solve anything – the others see you more as a bearer of moral advice, or simply asking some predetermined questions to “God”. 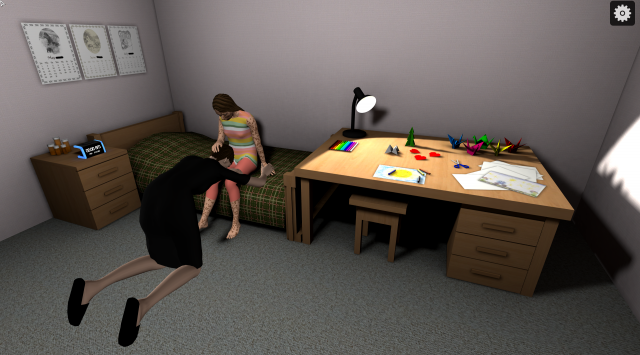 When in dialogue you are presented with multiple ways to take a conversation. The vast majority of the time, it won’t make much difference what you say. This isn’t Telltale’s The Walking Dead where every character “will remember that”. In the first situation you’re in though, you do make a choice between life and death; but of course, the circumstances aren’t so easy. Most situations present a good variety of options to choose from, although sometimes I did find myself coming across as a bit more of a dick than I wanted to. Such is life.

Graphically, you wouldn’t be blamed for climbing to the rooftops and claiming “ASSET FLIP!” I’m pretty sure it would run on an NVIDIA 6800GT from 2004. The background from the skyscraper in which the LIFE+ offices reside is plastered with a static image, and don’t even mention the animations. The style is at least consistent, and performance is good, so I have no real major complaints.

Electronic riffs preside through most scenes and interactions, which I did have to turn down a bit because they were getting distracting. There is a different tone for each scene, so you won’t have the same pieces accompanying you throughout your playthrough. Most of them are well placed, except in a couple of locations where perhaps some more sombre tunes were required. 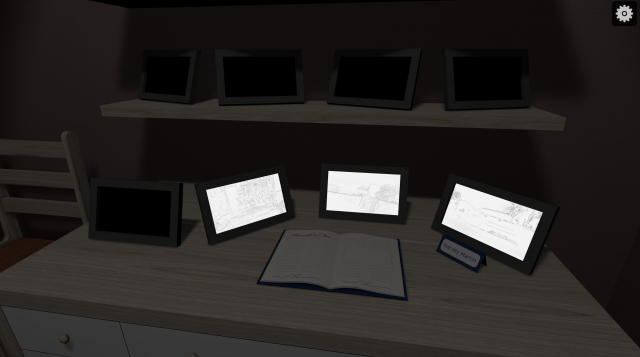 Each tablet another life story

The biggest issue for me amongst all of this is that it can just be too wordy at times. There is a particular problem that you must solve which essentially goes through an entire life story of some guy you never actually meet. I found myself wanting to just skip through what he was saying to get to the point. Dialogue needs to be balanced carefully or you risk players getting bored and disregarding half of what you’re saying. I also found some sections to just be a bit too convoluted, and bordering on pretentious.

In all, Supposedly Wonderful Future took me about three hours to complete. The ending wasn’t fantastic, or much of a surprise either (I could pretty much already guess what was going to happen before it did). It’s not the worst three hours I’ve spent though. If you’re an avid reader, enjoy point-and-click games  and are interested in philosophical conversations about the future, then a few hours here might just be worth your time. Whatever time is…a flat circle? But where does it end…and begin…who am I…

Supposedly Wonderful Future has left me considering the events of the game, and whether my moral choices make me a monster or a model citizen. It doesn’t really do much wrong, but if you didn’t like point-and-click games with a heavy amount of text before, you won’t enjoy them after, either.