PlayStation Plus has been wavering now for a few months. Gone are the days where Triple-A titles were on offer, being replaced by smaller and more modest indie titles. It’s not a bad thing mind you, for all the forgettable titles that get added to your console’s library a few gems are added as well. Table Top Racing: World Tour is one of the most recent additions to Sony’s monthly offerings and it unfortunately takes its place as another of PlayStation Plus’s forgettable games.

The premise of Table Top Racing: World Tour is strong. Imagine Micro Machines and Mario Kart combined and you can begin to imagine what kind of game it is. The game’s Championship mode has you progressing through increasingly difficult tournaments with each subsequent one allowing you to use faster cars. The three types of cars are Cult Classics, Street Racers and Supercars; each gives you the choice of four cars which you can purchase and then upgrade. The designs of the cars are great and you also get to upgrade ancillary things such as the paint job and the wheels. In fact the wheel can be the most interesting part of the upgrade options as each set offers a different bonus. For example there are wheels that let you drift, bounce and destroy all active weapons making customisation an important facet to your playstyle. So far Table Top Racing: World Tour has all of the ingredients for a great arcade style racer. Regrettably when it comes to the gameplay Table Top Racing: World Tour becomes a mundane chore that does little to separate it from an acceptable standard. 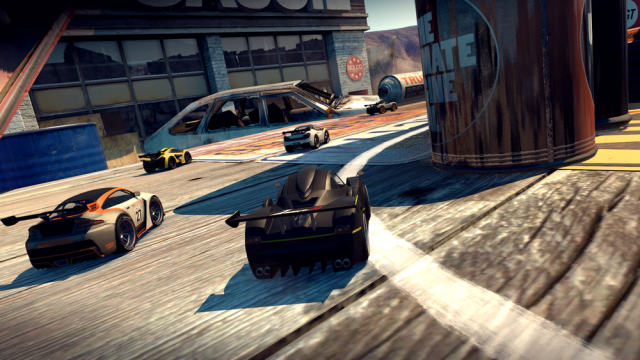 There are a few modes in the Championships that offer variety. The standard Combat mode has you racing against opponents and using weapons to stop their progress and increase your chances of winning. Maybe it’s the aura of Mario Kart looming large over this genre of game but the weapons on offer are fairly standard and rarely exciting. Offensive weapons include missiles, freeze shots, an EMP attack, acid trails, bombs and more. Successful attack lack impact however and certain attacks such as the acid trail do little to hinder progress. Other modes include a drift mode which is highly dependent on your choice of car, time trial, a pursuit mode where you have to catch up to an opponent, pure races without weapons and an elimination mode. The final of every Championship always features multiple combat races where your points are tallied up at the end of each race. The plethora of modes is welcome but the driving itself is never exciting enough to make them fun, making getting through races a chore. In fact the driving doesn’t feel responsive enough, making corners particularly tricky depending on how much you’ve upgraded your handling. It gets more enjoyable when you unlock better vehicles but by that time the allure has worn off.

The tracks are one of the best aspects of Table Top Racing: World Tour. There are five themed locations with each one offering a distinctive area to race around. Each location has a track that has four routes effectively giving you 20 tracks to race around. The changes to the routes aren’t significant enough to make it feel like there’s enough variation for each track. Saying that, the tracks are well designed with multiple shortcuts to find. One of the best inclusions is the ability to use weapon attacks to break or activate certain objects. It’s a neat little way to find shortcuts and activating an 80’s robot toy to drop blocks on enemy cars is always fun. The objects that are littered around the tracks give each location a charm. Things like magic 8 balls, fruit, sushi and workshop tools are just some of the items that give each track their unique properties. 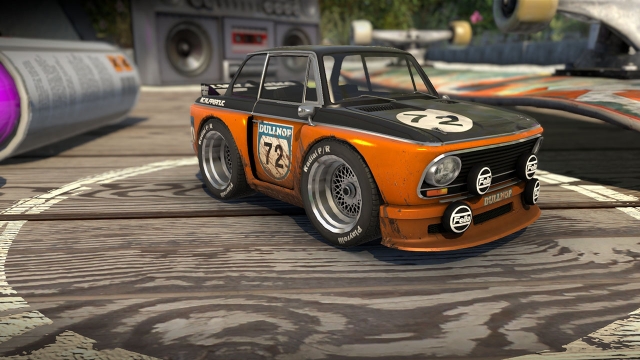 The visuals complement the track design as well with bright and colourful hues on display. The cars gleam with vibrancy and the different track surfaces each allure to a certain texture. Its let down by some slightly garish looking weapon effects but overall Table Top Racing: World Tour is pleasant to look at.

Besides from the Championships mode there are also special events to take part in where you are limited to a certain car and wheel choice. Disappointingly though these events do little to stand out and don’t offer anything that you won’t have faced in the Championships. It can be fun to use some cars that you haven’t driven before, but as an extra mode it feels thin on content.

There’s also an online mode where you can race against other players. The offerings are fairly standard with weapon pickups, wheels, tracks and upgrades being the choices you can limit the games to. It’s an extra inclusion that adds longevity to anyone who enjoys racing and playing against real opponents is more satisfying than playing against the A.I.

For what could have been a unique and quirky racer Table Top Racing: World Tour is decidedly boring. The gameplay never surpasses an acceptable standard ultimately affecting the fundamental core of the game. It’s a shame too because if the gameplay was stronger then I’d actually quite enjoy playing through the game’s different modes. Whilst things such as the visuals and track design elevate the game they aren’t enough to make up for the driving. Table Top Racing: World Tour  never gets off the starting line and when it does it stalls to a stop, making it a frustrating and disappointing game.

For what could be an exciting arcade racer Table Top Racing: World Tour fails to make an impression. It's an acceptable racer but it does little to distinguish itself leaving it feeling standard and boring.

A disappointing 5/10 - that clearly not the experience most of our fans are having with it. The PS4 Store rating is around 4.2/5 so 84% and thats on 20000+ ratings...Equally, on PC , there's an 84-86% positive response from Steam customers too. This is largely in line with the mobile game we produced in 2013/14 that has an average of 82% accorss all platforms whether free or paid and reflects fairly the 10m+ installations we have had. I understand it's not for everyone, and clearly not for yourself Reece, but I guess I'd say that as an Indie Developer, we did a good job at hitting the sorts of gamers we were looking for. Appreciate the time taken to give it a review, but it's not reflective of the games standing within our community.

Hi there thanks for commenting! I'm pleased to hear that a lot of people are enjoying the game. There were aspects of it that I enjoyed but like you said it's clearly not for everyone. It might not be reflective of the games in your community but I couldn't justifiably give it a higher score for those reasons. Anyway thanks for the response, I look forward to seeing what Playrise Digital releases next!

I felt largely the same. I loved the original mobile title, but I didn't get as hooked to the PS4 version. In my opinion, local multiplayer would have added a lot to the game as that was where games like Micro Machines really shined.

Splitscreen multiplayer is planned, as are leaderboards, more gameplay modes, new levels, new vehicles. :) We did what we could with the budget and resources we had, we're no AAA studio, still only a team of 10 (inc. Audio and PR) :) Its been a lot of fun making it and if you're interested in seeing how it develops, please follow us on www.ttrwt.com, fb.com/Playrise, @playrisedigital Keep watching - launch is only the start these days.

I'll definitely be doing that. Can't wait to see what you can do with the game as it develops post-launch.

Splitscreen is a major task - sounds simple and back in the old days it was a lot simpler. We now have to deal with wireless joypad disconnecting mid session, user profiles and cloud saves per player,  we need to handle age ratings for each person at the controller, and we need to do that Globally too. Rework the HUD, Menus and Pause for 2 or maybe even 4 players. Its an expensive feature to add but one we alway knew was important. It was planned from the start - we even said we wanted to bring it in a Playstation Blog post in 2014.  We know that Beer/Sofa/Pizza/Punch ya Mate in the Arm moment is definitely a good thing, but it's not cheap to make any more :) We've been asking the community to support us via DLC to make this happen and so far they have responded well and positively to that call. More to come.

Same here I'll dive back into it once those updates go live and adjust the review accordingly. New levels and cars would be a big plus for me.