Absolutely terrifying. Teleglitch: Die More Edition is a wonderfully simple yet perfectly executed top-down survival horror from Test3 Projects. A fine example of the notion 'don't judge a book by its cover', this dull, pixelated mess actually comes together within the first minute of play to create an experience that will get your heart pounding more than most horrors you'd care to mention. It succeeds where so many others have failed by placing the player inside a bubble filled with unrelenting tension. 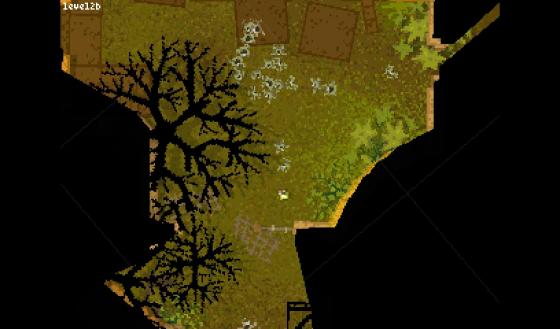 Owners of the original Teleglitch will get upgraded to the Die More Edition for free, newcomers will have to cough up a decent price for a more complete and well-honed experience. The upgraded package comes with more levels than before, expanded stories, lore and information about the Teleglitch universe itself, more weapons and more intelligent AI. To put it another way, you have longer to learn about the story of Teleglitch as you arm yourself against an onslaught of intelligent zombie-like creatures.

Waking up to find yourself marooned on a distant planet as the lone survivor of a terrible event, you find that all other inhabitants have died, and the super artificial intelligence residing on the planet has taken upon itself to implant microchips into the dead to have them reanimated and run amok; making your escape plans very hard indeed. Navigating dark, claustrophobic rooms and hallways inside a large research laboratory, your simple task is to escape. Just get the hell out of there.

What makes Teleglitch: DME so atmospheric is its line-of-sight gimmick. A simple notion of only being able to see in a straight line, similar to the one used on the blueprint map in Monaco: What's Yours is Mine, translates into creeping slowly around most corners and poking your head into rooms only to panic at the horde of undead nasties who've just seen you. Panic manifests itself in many different ways; the main ones are to scream obscenities and run like hell, fire your weapon wildly in the vain hope that you'll kill something, or both. These methods, while not totally ineffective, are fairly likely to get you killed. Teleglitch requires a steady hand, precision aiming and calmly accurate backtrack-firing and circle-firing. But honing these skills takes time and patience. The Die More Edition is so-called for a reason. Expect to die. 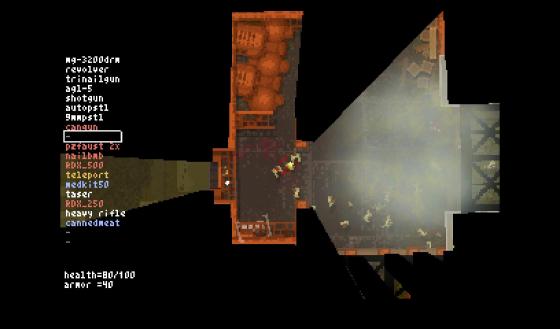 It's not all unrelenting bad guys though, there's plenty of adventuring / dungeon-crawling and looting to be done. The ante is upped, however, when you consider ammunition in general is scarce, weapons are crafted by your ability to piece together crap that you scavenge around the lab, and a great deal of weapons you create are pretty rubbish. Not all weapons are foraged though. Survive long enough for a laser-beam or a GTA2-style electricity gun. Oh, and permadeath. You die, you die. No continues, no saves, not even the same level twice. The maps are procedurally generated and, despite a few parameters, are totally random. From one game to the next, very little about Teleglitch will be familiar territory except the difficulty level, of which there are ten. It's a shame that the 'Random Starting Gear' option is only available to pre-order customers, as this adds yet another amount of uncertainty to your terror. Not knowing if you're about to start your descent into pant-wetting insecurity with a machine gun, a slightly sharp stick, or even just a box of grenades is a great addition that should be available to everyone.

Controls are simple and effective, using the mouse to aim and fire, and mastery of WASD is required to weave in and out of incoming monsters or backtracking through corridors as you fire at the approaching enemies. Crafting takes its cues from ZombiU, The Last of Us and State of Decay in making it all real-time, so taking too much time deciding what to make or figuring out what trinkets and gubbins can be made into better weapons can easily distract you from an advancing bringer of permadeath. And no-one wants that. The menus for crafting are a little clunky, making fast decisions in the heat of battle a minor annoyance, but learning to work with the clunkiness rather than let it frustrate you easily counters this minor niggle. 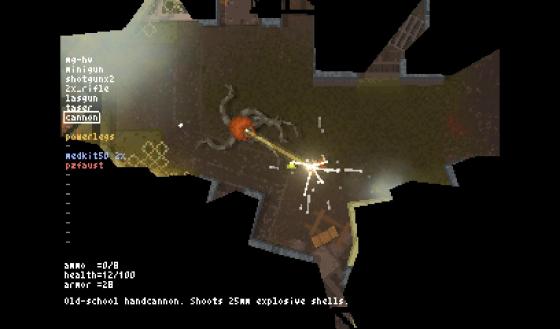 If you're really good at the game then it isn't a huge by any means, but you're unlikely to be that good. The game's ten levels are fairly sizeable, but only five are open to you from the outset. Beat level 1 and level 2 opens up the choice of 2A and 2B, for example. All levels available to you, including new ones you unlock, can be attacked in any order you see fit. The game isn't about progressing through the story per se, it's about seeing if you have the stones and the guile to survive long enough to die another day. Boss battles are fun but repetitive, and beating your first level will have you punching the air in a fit of satisfaction and success, but most of all, relief.

Teleglitch: Die More Edition achieves what many of the survival horror genre fail so badly at – the notions of both survival and horror. The permadeath makes each step into the unknown a tension-filled heart-pounder, and when you're attacked either by hordes or a singular enemy, an innate fear of death grips your mouse and keyboard like nothing you've ever experienced. The atmosphere and line-of-sight mechanic work very well together, and the graphics, while crude by today's expectations, instead offer an identity and style unique to a very unique game.