Say what you want about SEGA. While Alien: Isolation might not have been the survival horror game fans were anticipating, and the mysterious cloud surrounding the the whereabouts of Shenmue 3 has only recently been blown away, when it comes to 2D side scrollers, they know exactly what they’re doing. Long gone are the days of old school Sonic and his superspeed, 2D, ring-collecting adventures; step up TEMBO THE BADASS ELEPHANT.

Elephants might not be the first thing that spring into your mind when you hear the word badass; Samuel L Jackson, Honey Badgers and those plants that eat flies all, in my opinion, top the list. After just a matter of minutes with TEMBO THE BADASS ELEPHANT though, you might want to change your mind. Best described as a cross between iconic sidescrollers Mega Man and the aforementioned Sonic the Hedgehog, TEMBO THE BADASS ELEPHANT is an idyllic combination of a high speed collectathon and methodic platformer. All of this is then tied up with a neat little graphical bow similar to that of Valiant Hearts: The Great War. The story, told through textless comic book frames, sees you take on the role of Tembo, an elephant commando, complete with bandana and war paint, who is called upon by the army to stop the invading PHANTOM, an evil corporation fixated on global domination.

As with any 2D side-scroller the aim is to keep heading right, overcoming obstacles, enemies and collecting trinkets which amount to extra lives. TEMBO THE BADASS ELEPHANT of course has all of these -- peanuts mount up to form peanut butter, and of course peanut butter is ‘life’ to elephants -- but rather than being the standard “head right and reach the other side”, each level has a number of collectibles to find. I of course mean collectibles in the loosest possible way. There are 10 imprisoned members of the public to find who happily sit on your back once free, as well as the disposal of every PHANTOM agent on the level. It’s not exactly an innovation, but encourages you to replay each level to satisfy your inner OCD sufferer. What’s more, this becomes essential as you progress through the story, as some levels are locked until you have dispatched of a certain amount of enemies. 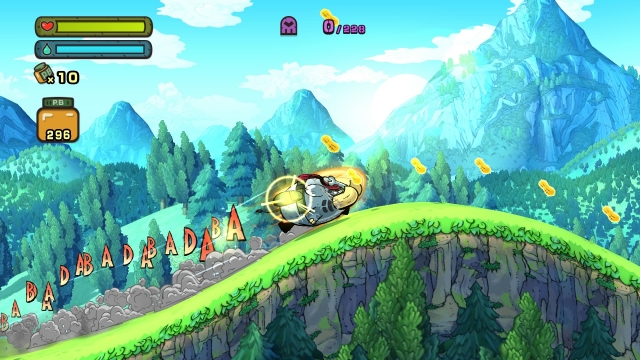 It’s not all holding the analog stick right and jumping at the right time though, some levels require puzzles to be solved. These are far from complex though, ranging from things as simple as smashing through a hidden wall, moving a giant bowling ball onto a platform or short circuiting electrical supplies. It’s a welcomed change that stops, just for a short while,  the constant trampling over PHANTOM agents!

Disappointingly, your playthrough of TEMBO will last no longer than around four or five hours. The first of those hours will be spent getting familiar with the various attacks, all of which are mapped to a combination of ⃞ and X. While this seems like a nod to the days of classic 2-button side scrollers, it seems somewhat unnecessary to have the best part of 10 different attacks pinned to two buttons, the rest laying dormant on your controller. And with Tembo’s rather floaty and slow walking controls, you’ll be holding down his dash attack, ⃞ , to constantly speed up your progression which will often throw your attack choice off kilter. TEMBO THE BADASS ELEPHANT is as beautiful as its premise is hilarious. The 2D art style of hit indie titles gone by is ever present but has somewhat of an action cartoon twist. As you run through cities and hillsides, the rumbling footsteps are met with an onomatopoeic ‘badadadada’, bombs explode with a declaration of ‘boom’ and Tembo’s introduction sees him raise his trunk with a ‘hraaaah’ as if to say ‘bring it on, bitches’. The background isn’t just a static image either, it’s a living, breathing landscape that moves alongside you and features passing helicopters, and invading PHANTOM patrols, making you feel that much more part of the invasion.

SEGA and developers Game Freak, best known for the Pokémon games, have not just churned out another generic platformer to add to the collection. TEMBO boasts some fine IP as inspirations and, although it’s a short experience and the controls could use a rethink, you need a good reason not to take the time and play through its entirety.

2D side-scrollers certainly aren't at the top of everyone’s favourite genre. But a fun, new approach, a fantastic concept and beautiful design might well see Tembo become a mascot for the future.

Tembo the Badass Elephant Gets a Launch Date

Honestly, if Gamefreak made Call of Duty, I'd want it. I'm a sucker for their stuff...

Hahaha, you have to take your hat off to them. It's such a good game!