It goes without saying that when Minecraft was released on PC in 2009 it quickly became a phenomenon that changed the gaming landscape as we know it. However, less mention is usually given to Terraria, a 2D take on the sandbox genre which itself spawned a number of copycats. Having already found its way onto PS3, PS Vita, Xbox 360 and every mobile platform under the sun, Terraria has now hit Xbox One and PS4. As someone who's never spent any real time with a sandbox game, this seemed like as good a time as any to see what the fuss is all about.

Terraria sees the player dropped into a blocky, randomly-generated 2D world, and given free rein to explore, mine, create and kill enemies. It’s a formula that’s since been used by countless games, including Starbound, Windforge, Craft The World and the many other imitators that currently grace the Steam store. The recipe has clearly been a hit, but for some reason it never appealed to me. That is, until I put a dozen or so hours in Terraria. 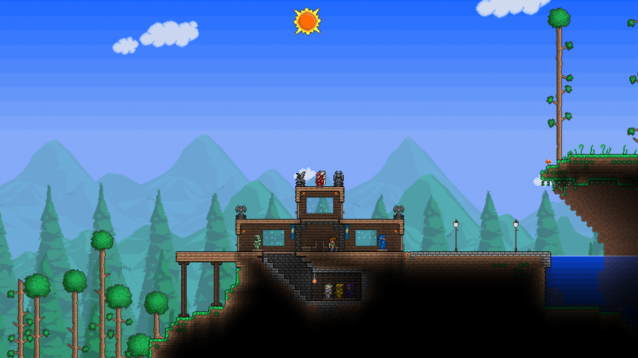 After completing the tutorial and creating my crude 8-bit hero, I jumped into a new world. With my lack of experience with this sort of game, and without being given any sort of direction, my initial reaction was to run around and explore the land. However, following a few swift deaths in areas that I was clearly ill-equipped for, I decided to explore downwards. I started to dig, and I kept digging until I eventually fell into a cavern filled with new enemies, materials and hidden treasure chests.

Several trips down my makeshift mine later, and I had amassed enough materials to create a nice two-storey house complete with crafting stations. The feeling of accomplishment from creating something of your own without help or direction is something you simply don’t get in other genres. From here, things began to snowball as I crafted more advanced items and explored new areas. It’s an extremely addictive cycle that left me constantly on the lookout for the next piece of armour to wear, weapon to wield or enemy to fight.

There’s a lot to see, too. According to 505 Games, the PS4 version of Terraria is three times bigger than the PS3 version, and includes ‘well over 1,000’ new items. Honestly, it’s a little overwhelming when you’re just starting out, and I often had to consult guides as a result - I would've liked some more crafting tutorials. Still, the amount of content is staggering, and this seems to be the ultimate version for die-hard Terraria fans. 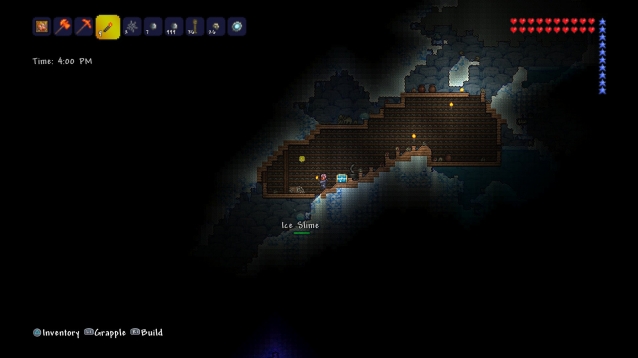 The controls, while responsive and impressive considering the game was originally intended for keyboards, take a bit of getting used to. To start with, I kept finding myself throwing items instead of interacting with stuff, which was especially annoying when I was trying to close a door on zombies, but instead lobbed my sword at them. There are some neat touches, though, such as being able to zoom in and out by pinching the Dualshock’s touch pad.

The key to Terraria’s genius is its sense of adventure, which it creates without any scripted sections, cutscenes or narrative ties. Instead, it does so with intertwined systems which produce frequent moments of pleasure. From the satisfaction of creating a new home, to the relief of winning a tough battle, everything hits harder because the game made you work for it. As a result, this deceivingly simple-looking 2D platformer is one of the most empowering games I’ve played.

This deceivingly simple-looking 2D platformer is one of the most empowering games I’ve played.

Terraria Cancelled on Stadia: What's Going on Between Re-Logic and Google?