The Caligula Effect was an RPG developed by Aquria, released on the 23rd of June 2016 in Japan and later released for the rest of the world in 2017. Known for its unique combat system and having Tadashi Satomi (who worked on Megami Ibunroku Persona, Persona 2: Innocent Sin and Persona 2: Eternal Punishment) as its head writer. It came out to mixed reviews, praising it for its combat system, but the overall quality of the game wasn’t exactly… great. It was often described as a “poor man’s Persona.” and I’d be lying if I said that it wasn’t accurate. However, with the release of The Caligula Effect 2, will this game get the spotlight it deserves? 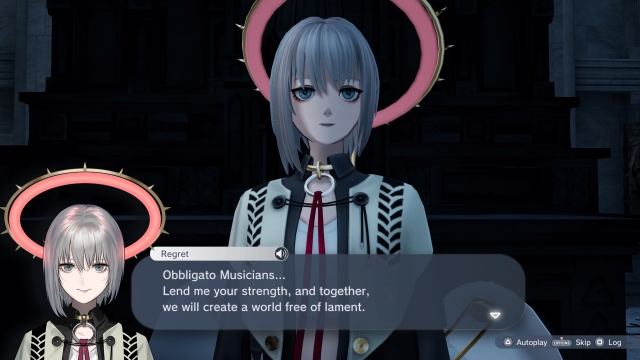 Taking place five years after The Caligula Effect, its set-up is… almost the exact same as the last game. A virtuadoll (virtual idol, no relation to hololive) named Regret has created an all-new virtual world, Redo, and has been using her music to trap people within this simulation without memories of their past life in the real world. However, this seemingly peaceful, definitely-Japanese paradise is shaken by an unreleased virtuadoll, χ (chi, like key in Keyblade), who breaks into the simulation and restores the memory of a high school student. Now you, President of the Go-Home Club, χ, and a cast of damaged individuals must fight against Regret and her Obbligato Musicians if you want any chance of breaking out and going home.

The story is… well, it’s not really anything to write home about. It’s the sort of anti-escapism aesop you’ll find in any other story. However, most of the characters themselves are likable, with their own personalities and traumas they’re running away from, but you can pretty much tell who is going to be in your party without much prompting. However, the character episodes are interesting to go through, getting to know the character a little better and provides some depth. There is a Good and Bad Ending, but the choice is kinda obvious, as long as you pay attention. Also, there is no English dub for those who want it or don’t like reading.

Now, combat. If you’re coming into this game expecting the usual turn-based affair, where eventually encounters become tedious and you coast through with the Auto-Battle, you’ll be thrown off by how complex and challenging the combat system is. You see, every action selected will need time to be executed; from preparing the move, to using it, and then needing to wait before you can select your next move. Additionally attacking, guarding, and even just adjusting your position in the battlefield must all be taken into account when fighting. You can see how a move plays out before you confirm it, and adjust when the move is executed. It makes a huge difference even if the seconds between are not. However, the preview doesn’t take into account random events like critical hits and misses, so not everything works out like it’s supposed to. 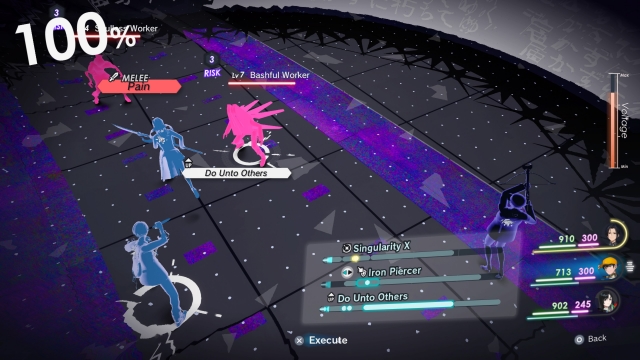 It gets complicated, but it’s satisfying to watch how your plan works out.

And there’s more to leveling up than simply getting stronger and getting new skills. No, a new move means more opportunities to strategise. Every move has situations where it should and shouldn’t be used, and makes for very satisfying encounters even against the most lowly of enemies. You have to take into account the timing of the moves, the position of your party members, when the move is executed and how the move is executed. For example, one of the Protagonist's moves: High Disturbance. Not only can it counter ranged attacks, it’s able to hit airborne enemies, and because it causes the Protagonist to land behind their target, it can also dodge attacks if you adjust the timing right. While not all skills are that complicated, it becomes a game of planning and adaptation. I can beat enemies with a way higher level than my party combined just by thinking through each and every turn I can take, its timing and what the move does. And don’t worry about every attack using up SP, or your Mana points here. Not only are you fully healed after every battle, SP is passively generated during battle and there’s a skill everyone knows that refills it completely, it just takes a massive chunk of time before you can act again.

There’s no other turn-based game I can think of that allows me to juggle an enemy into the air like in Devil May Cry. And I haven’t gotten into managing an enemy’s Risk level, Overdose skills and χ-jacking yet. Combat is way too fun to ignore, and besides, running away takes longer than any other move. This review is getting really long, so I will probably leave the rest to the players, but I’ll just say they are fun to use and can greatly affect your battles.

This game goes all out on idol music. I admit, I do enjoy idol pop and can listen to it for a good while, but it’s also on repeat throughout entire dungeons. The songs get stuck in your head after a while, and you will get sick of it, but they are good and you can listen to them at the jukebox after the first dungeon. A fun and smooth combat system. Everything else...

Outside of combat is where The Caligula Effect 2 begins to falter. It’s your standard Japanese urban environment, something you’d see in any other game. From the underground subway to the planetarium, they are all… really kinda bland. I have no problem with the art style, it’s just really generic. If you have previously played any anime-esque games set within modern-day Tokyo (which is a lot of Japanese games), you won’t really find anything really worth a screenshot. And the animations outside of battles and story cutscenes are robotic, awkward, and cycle through the same couple of gestures. Also, I don’t like the running animation - everyone has the same running animation cycle, and it looks really awkward.

And then there’s the Causality Link, which keeps track of every NPC without a glitchy face that you’ve talked to at least once. This is where you’ll find your sidequests, ranging from simple solo missions to more complex group quests. While the group quests are tracked and on your mini-map, the solo quests are not. The game just gives you the rough location of the solo quest giver, forcing you to find them yourself if you haven’t run into them roaming around in other areas. The areas you are guaranteed to meet them in also have encounters, or they are the encounters themselves and you have to beat them before you can talk to them. The group quests are also pretty bland, but in a different way. Sure, they have cutscenes and voiced dialogue, but a lot of them involve running back and forth between NPCs and require you to have a certain passive skill equipped in order to progress the sidequest. It’s not hard, but the sidequests are tedious and boring. Anyone going for 100% completion will find them grindy and dull, and there also at least a couple dozen sidequests. The sidequests aren’t very interesting, but at least give you decent rewards.

Onto the performance of the game. I have PlayStation 4 Pro, however at the time of reviewing the game there were notable, yet ignorable issues. There was pop-in, even for character images, and whenever I loaded into a new area it would stutter for a few seconds. Still, it ran at a solid 60 FPS most of the time, the load times in-between all the cutscenes and areas didn’t take more than a few seconds, and entering battles is seamless, making the current environment your battlefield no matter where you initiate combat.

The Caligula Effect 2 is a game that deserved a better budget than it got. The combat system is amazing, since it requires a lot of forethought and planning, and spamming the confirm button isn’t the most effective strategy in the game. The limited animations outside of combat might bother some people, and the performance could be better. I personally liked the music, but I know it’s not to everyone’s taste. There’s only so much you take of idol pop music before it drives you insane. The mechanics and systems are what make The Caligula Effect 2 a game worth picking up for any RPG fan, but don’t expect anything better than you would find on the PlayStation 3.

The Caligula Effect 2 will release on the 22nd of October 2021, and is available on Nintendo Switch and PlayStation 4.

The Caligula Effect 2 (Reviewed on PlayStation 4)

The Caligula Effect 2 is a game that deserved a better budget than it got. It’s combat system is amazing and engaging, but everything else about it could be better. 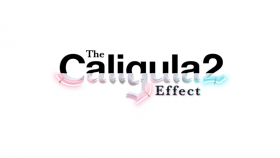