Welcome to Twin Lakes, population 75,666, a town made up of people too dumb to notice all the supernatural events happening around them. Luckily they have Detective Francis McQueen and his bumbling sidekick Officer Dooley, known as the Darkside Division, to help solve all the bizarre occurrences around town. So grab your trench coat and fedora, cause it’s sleuthing time. 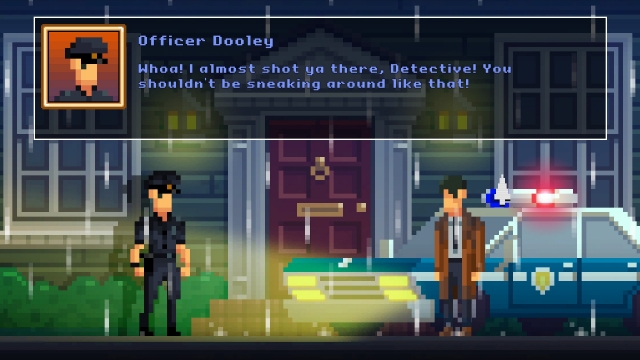 It’s been years since I have played a point and click adventure game, but The Darkside Detective caught my attention. It looks like a mashup of detective shows like Columbo, mixed with Unsolved Mysteries and a dash of the Airplane movies. Combined with beautiful retro-style pixel graphics this made it a must play for me.

The Darkside Detective was created by Spooky Doorway, a small team of only five people. In this game they have created six different cases full of humour and great references for you to solve. Since the game has been out for a couple years now, the cases that were available as DLC are included in the main game, so you will have nine cases in total. All of the cases are standalone stories; the only thing connecting them are the detectives. The case names are a play on the name of a popular movie: Malice In Wonderland, Tome Alone, Disorient Express. I’m sure I don’t have to tell you which movies these ones are referencing. Being a big movie fan, I love all the references in this game. They even have references to another game that deals with supernatural beings, Luigi’s Mansion. The game looks like it is set in the 90’s, especially when you see the older computer that McQueen uses to access the case files. Gotta love the good old green scan lines! The attention to detail is obvious, they even took the time to show McQueen’s reflection on the office monitor. 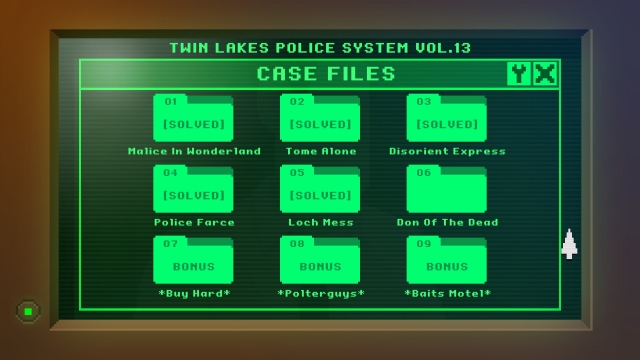 The Darkside Detective isn’t one of those games that is trying to stump you. They want you to be able to solve the cases, so they are fairly straightforward. Most of the items you need to progress are easy to spot; at one point the item is right in the middle of the floor and the game makes fun of itself for doing this. You will pick up items that don’t seem to be useful, but later on, when combined with another item it can become just what you need. For example, in one of the cases you will grab a broken broom handle, can’t really use it on it’s own but if you combine it with the rubber end from a plunger you have a way to get rid of the creature in the toilet. Though not super complicated, the game is still challenging enough that you will feel a sense of satisfaction when you solve a case, but the humor and silliness will really keep you entertained. This is not going to be the type of game that gets so frustrating you just quit and never come back to.

The music in Darkside Detective is great, it has an air of mystery to it and complements what is happening in the story. Ben Prunty, who did the soundtrack for this game and others like FTL and Subnautica, said he was inspired by John Carpenter, funk music, ‘80s film and old video games. This is definitely not one of those soundtracks where you just want to turn the sound volume down or mute the tv. There is such a variety in these songs, you just want to hear more. If you are interested the soundtrack for the game is available to download online. 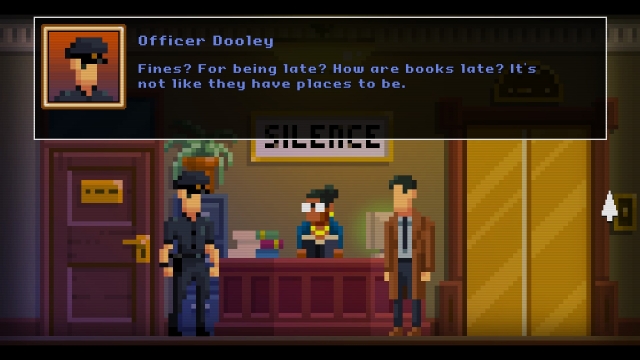 I love everything about this game, the music and sound effects are great, the crisp and clean pixel graphics, along with the characters and sense of humour. This is a great game that you have to check out! If you want a game to play for Halloween that deals with the paranormal and creepy stuff, this is a great choice. Especially if you do not enjoy games that just want to scare you! Spooky Doorways had a kickstarter project to create a Darkside Detective Season 2. Their campaign was successful, so now there is a demo available for the second season which is slated to come out Q1 of 2021. I can’t wait to get back to work solving cases with Detectives McQueen and Dooley! The Darkside Detective (Reviewed on Windows)

The Darkside Detective is an adventure game that will have you laughing as you solve the mysteries behind the paranormal events plaguing Twin Lakes. With great visuals, music and movie references this is a must play!