The King Of Fighters Collection - The Orochi Saga Review

The King of Fighters Collection: The Orochi Saga (mouthful of a name) is a collection of the KoF series from 94’ through to 98’. The idea of the game is to pick your team - each team is sorted into countries and comprises of three fighters - and annihilate your opponents. Hitting, kicking and throwing your opponent is the key to success here, and with the inclusion of a ‘POW’ bar you have to plan your super moves for the right time. All pretty simple stuff really and the same stands for all of the games in this series unless otherwise stated so I’m not going to waste time and repeat it over and over again.

I will start by discussing KoF 94’. As the title of this game may suggest, it came out back in 1994 so is the oldest KoF in the series. Even though this game is now 15 years old, I was amazed by how good it looks and how well it plays.
You are able to choose from eight teams, as already mentioned with three fighters. You have to battle against another team and whoever knocks out (KO’s) the opposing team first is the winner.

The characters are very nicely designed and the backgrounds look lovely, I would not have believed this game was so old if I didn’t know anything else about it!
Furthermore the gameplay is very smooth and exciting which is something I usually find older fighters seem to lack in favour of clunky controls and awkward gameplay. There is a comprehensive move set with each character which can take a while to master as some of the more powerful moves are only obtainable through doing complicated button combos. I had a lot of fun with this game, and will continue to do so. KoF 95’ is pretty much more of the same, only with the added ability to make your team of three fighters out of any of the characters in the game. This is very handy because it gives a touch of customisation to the mix, you can create your team and lead them to victory crushing each person in your path. Other than that the game features most of the same locations and music as 94’. There has been a new character added but this doesn’t really do much in the way of innovation in the series.
It is however still as fun as it was in the previous instalment, if a little bit samey. 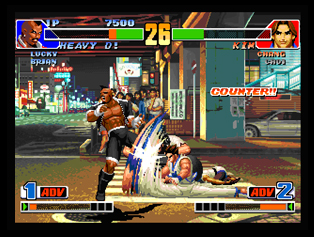 KoF 96’ is again like the first installations but with a few new bits added in; there is a new team of 3 added to the character roster but quite what their motivation is for entering I do not know (all shall be explained in a bit). In an interesting move, the developers have removed the option to block incoming attacks instead providing you with a ‘stop drop and roll’ kind of thing. I think it works as it keeps battles more fluid, there’s nothing more irritating to me that the opponent who constantly blocks, I’m an offensive kind of girl, I appreciate defence, but too much can slow the game down and makes it more difficult to play.

Locations and characters look even more beautiful then the previous instalment, crowds cheer you as you beat up your opponent and the ‘booby jiggle physics’ engine has been involved here making your female characters lovelies bounce around like jelly on a plate. It all seems a lot more polished than the previous two instalments, in both gameplay and looks. 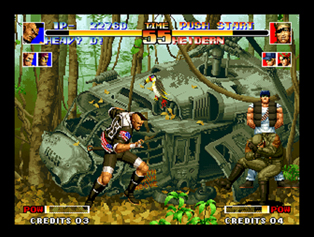 For KoF 97’ I find me asking myself, what can they possibly do now to progress the series? The answer is adding two different modes when selecting your character. These are Advanced and Extra and are to do with how the ‘POW’ bar fills up - either through defensive or offensive actions. This is a good inclusion as it gives you two ways to play your game: all out attacks and a super move at the end; or play defensively and get your opponent with a super move when they least expect it. This adds a bit more longevity to the game as you can go through it several times attempting both ways.

On top of this another three characters have been added making the roster up to 27. The ready made team approach seems to have disappeared in favour of the “choose your own three fighters to make a team” approach. The inclusion of advanced mode (increasing of the POW bar with defensive blocking manoeuvres) means that blocking is now back in the game which slows it down a bit but not as much as before. The characters don’t seem to be so block-happy which is nice. Gameplay still flows nicely and is a lot of fun to play but there is still nothing hugely innovative here, nothing that the original game didn’t cover in one way or another anyway. Finally, we have the last King of Fighters game in this collection, KoF 98’. One huge difference I noticed instantly is the sheer amount of playable characters, the count comes in at 39 not to mention the countless extra characters from the previous games. That’s a pretty impressive amount of people. This offers good longevity value as its going to take a while to complete the game with that many characters.
Gameplay wise, the Advanced/Extra system makes a return here which I believe is a good thing, but except the changes I have already highlighted, I cannot really see a huge change in the way the game plays, which might actually be a good thing as the system works well.

The locations and the backdrops to the fights look amazing though, you can see your team cheering you on as you kick your enemy into a barrel in a busy Indian marketplace. It really does look fantastic and the music is very good too.
I enjoyed this one more than the others due to the large character choice and amazingly fluid gameplay. I enjoy the challenge of figuring out characters best moves which is good because there are plenty of good moves around.

A good addition to the game package as a whole is the Media Menu. When you have achieved certain goals you unlock stuff in the media menu, from character artwork to soundtracks to each of the games. This adds a great challenge, especially to those who like to collect everything in a game. Another fantastic addition is the challenge menu. This sets you challenges such as surviving a round to win some artwork. These challenges go up in difficulty and are a good way to gauge your skills or simply show off to your friends!

A major down point and huge disappointment to me, you may recall me saying that I have no idea what characters’ motivations are, this is because there’s absolutely no story to any of these games whatsoever. I have no idea why this is but it’s such a shame because unfortunately, no matter how good a game’s gameplay is I find it very difficult to truly get into a game if I don’t have the foggiest idea what’s going on. I found myself having to go onto the internet to find out what on earth was going on, and from the sounds of it, the publisher has missed the opportunity to use a good story.
These games are very good if beat em’ ups are your thing, very fluent and full of action. With a good character roster and comprehensive move set for each of them, hours of fun is to be had in perfecting that last damaging blow! With the added Challenges game mode the longevity of this game is extended immensely and also the unlockable arts and music are a must for any fan of the series. The only let down was the lack of story, to some, a trivial thing but this ruined the game for me, without a story it’s a bit empty but if you can cope without this then I highly recommend this game.

The King of Fighters Collection: The Orochi Saga (mouthful of a name) is a collection of the KoF series from 94’ through to 98’. The idea of the game is to pick your team - each team is sorted into countries and comprises of three fighters - and annihilate your opponents.

The King Of Fighters Collection - The Orochi Saga