The Last Leviathan is what you get when you cross Besiege with the open sea. It’s a very enjoyable game and one thing that resonated with me from the outset were the beautifully vivid and cartoonish animations similar to The Legend of Zelda: The Wind Waker. In my first experience of the game, the sea was awash with a still, stunning and tranquil blue tint; with small, golden beached isles scattered around it. These striking first impressions were followed up with some great gameplay in what is an all-round stellar game.

The first thing you will find are that the menus are exceptionally easy to navigate around, and there are currently four available game modes, with Voyage coming soon. This mode will allow you to fight and sail across the seas, as you unveil the secrets of Middenhir in your journey. The Creative game mode is essentially an open world in which you can allow your creative mind to flow. It is the best starting point for beginners to this style of game.
Battle Seas is where you must earn stars to progress against an ever-increasing difficulty of AI. Racing events, dock sieges, survival battles and more are coming up on this game mode, so this is one to really look out for. 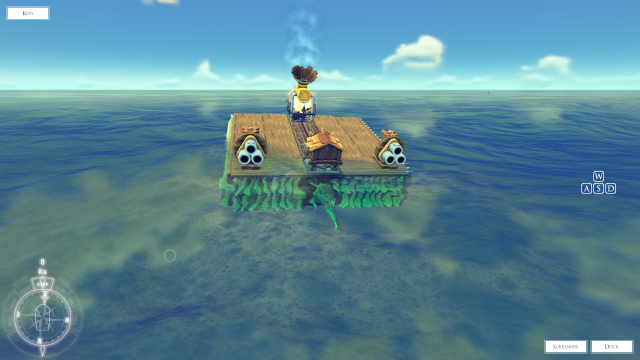 The final two game modes are Versus and Events. In Versus, you can choose who to battle, and where - with the Events mode being where you can find special events and competitions to take part in. All in all, the game has plenty of modes to keep players occupied and with the planned updates, The Last Leviathan appears to have longevity and replayability.

The building phase is similar to anyone who has played this genre before. There are some good options for making your vessel unique, with the usual mortar cannons, flamethrowers et al. But adding sails, propellers, decking, ornaments and rudders made each design look and feel more noteworthy. Once you have created your vessel, you can take it into the open waters against smaller ships, or larger pirate ships. I liked building ships that looked powerful and imposing, as it was great fun to ram the other ships out of the way. One gripe within the gameplay is that I would have loved it if you could assemble your own crew, with each having their own individual roles and responsibilities on board. Adding that human element could really elevate The Last Leviathan to the next level, as there were times the game felt a little too solitary. 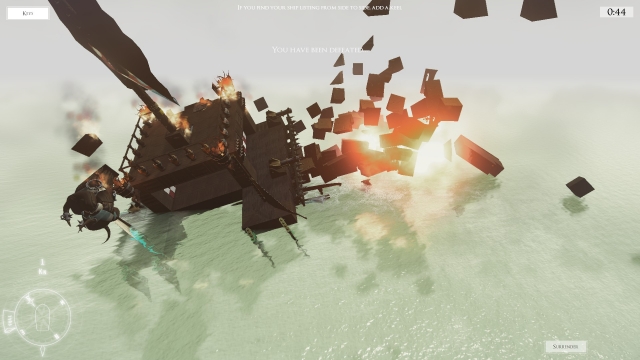 The price of £6.99 is extremely good value for money. The Last Leviathan has plenty of aforementioned game modes to keep you occupied, and it is also worth noting that this game will be updated, with bug fixes and optimisations. Also, there are monsters and a real-time multiplayer on the cards, so The Last Leviathan’s horizons will broaden further once ready. The impressive credentials of this game were heightened for me when there was no sign of a drop in framerate when I was building larger vessels. So many boxes were ticked when it came down to the overall workings of the game. I loved how its simple gameplay was implemented in a way that made it extremely enjoyable. The building element was just as enjoyable and relaxing as I remember Besiege being, and having to get the right balance between practicality and buoyancy was really challenging, which made this game more tactical than Besiege, in my opinion. However, when it came to zooming in and out during construction, often the slightest touch would send the camera into the ship itself, or too far out. This could have been the sensitivity on my mouse, as on the whole The Last Leviathan’s building mode was a success.

It’s hard to find complaints with this game though, as the all round package was so impressive. The vivid graphics and boisterous sea battles were two of my favourite elements. Battles against other vessels felt important, and having to keep track of steering while focusing on your counterpart made encounters all the more gripping and satisfying. 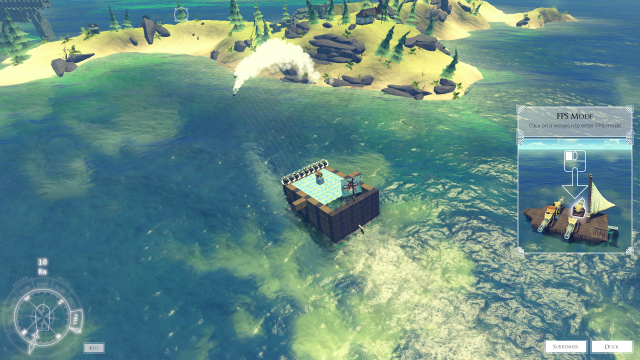 The Last Leviathan is just a really enjoyable game. Yes, there are small gripes like the sensitivity in the camera, the loading time when booting the game up, and the lack of crew members on your vessels but once the planned updates are implemented, there should be little reason to avoid this game. Sailing the seas in your own craftwork is very satisfying, as are the bright and vibrant graphics. It’s a hull lotta fun, and a ferry good game. Puns intended!