It’s five thousand years in the future, and nuclear war seemingly hasn’t wiped out all of mankind. Instead, humans have made contact with new civilisations, settling into alien worlds and galaxies. You take control of The Spatials, a faction created by the Human Federation along with the Crusantian Bunch. As Station Manager you will be controlling…literally, everything to make sure that your colony is the best of the best.

So what exactly is The Spatials: Galactology? Well, imagine Roller Coaster Tycoon in Space, and you wouldn’t be too far away. It is a – very granular, as I will talk about later – strategy game, a reboot of The Spatials from 2015. Developers Weird and Wry have employed a similar style as their previous game, with simple textures and easy navigation. 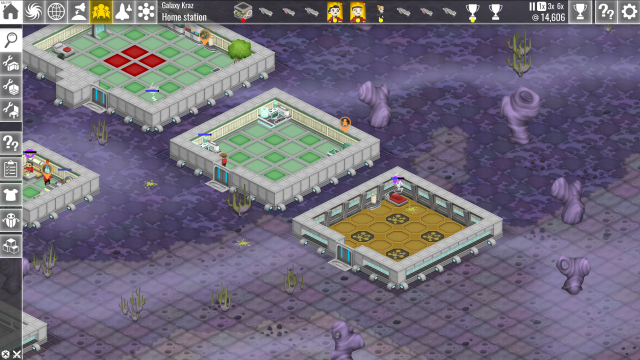 Fans of the genre won’t find themselves scrambling to the tutorial to figure out how to play. The basics are easy to understand: if you want a building, you need to place the flooring and the walls to surround it and you’re good to go. Here’s where some of the granularity comes in: you don’t just go and choose a kitchen from the buildings list. Instead, you construct your building as noted above, and then inside this you need to strategically place a series of objects to create a useful space.

The first thing that the game guides you through is creating this kitchen. To do this, you’ll need to have your minions create a Basic Kitchen, along with two Canteens (one for food, one for water). Once food or water is created, it is placed into one of these Canteens, where your faction members can take them. They’ll also need somewhere to sit when they eat (they aren’t monsters, after all) so you’ll need to build a Kitchen Table. And that’s your basic little kitchen built.

This theme carries on throughout the game, no matter what you’re building. You need to consider what you’re placing and where, because each object has aesthetic and noise ratings. If you fill a room with showers and expect people to sleep next to them, you will be faced with an angry colony. It means some planning is needed before you build, to know what you need to place inside and how much room it will cover. 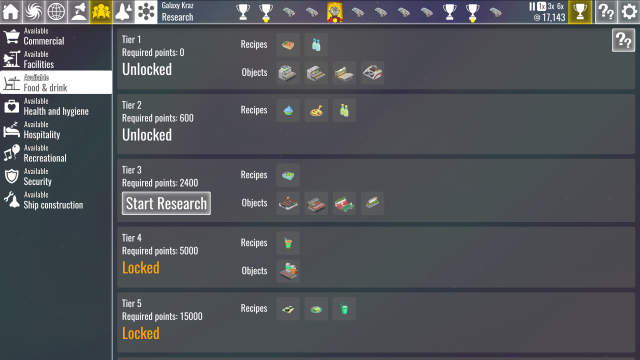 That little help sign at the top is the tutorial, which I did not see for ages (not that it greatly helps)

You do get a tutorial to guide you through the basics, but that’s all it does – the basics. Sometimes, it can’t even do that right. It’s the very first annoyance I encountered and one that really hampers your first couple of games, because you just don’t know what you’re doing. It works by instructing you to complete certain tasks, such as placing a specific object or starting a particular research task. But if you accidentally press Escape or close it, the tutorial doesn’t resume where it was closed. So if you had to build an expensive building, you will have to build another one to get through the tutorial. There is an in-game guide, but this is quite bare bones given how much there is to know.

As long as you don’t give up after that, you can start getting your staff into ships and sending them off to other planets to explore. The closest planets are inhabited by allies, so you are free to land on them and use an Extractor to get some resources. There is a generous amount of fruit, water, and aluminium provided at the start, but it will soon run out once your base starts building up. You’ll need to find some slime to get producing some lovely blue cupcakes.

This same framework continues on throughout the game. There are other galaxies to explore with a host of worlds, inhabited by friendly and unfriendly colonies. You can choose to wipe out these enemies of the state or attempt to forge an alliance – more relationships means more opportunities to sell products you produce, and more tourism to your planet. If you have slight psychotic tendencies, you might choose to ally with a civilisation before wiping them out of existence. Just make sure you get all of them, because the remainder will really hate you. 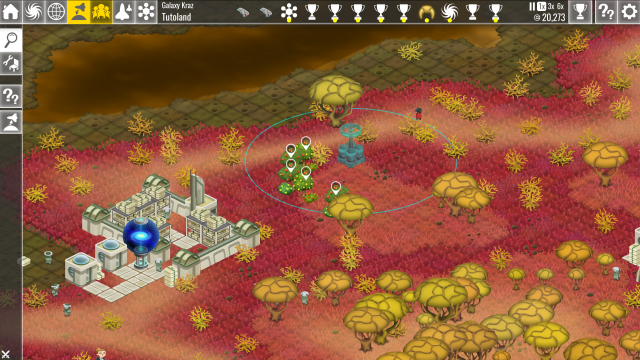 Visiting my good mates to collect food from their planet. Don't worry - the floor's not lava

Weird and Wry have clearly spent a lot of time creating this game, because it really shows. Perhaps a little too much. In most games you would create, say, a Soap Maker, and it would automatically consume whatever units it needs to make your soap. In Galactology, however, you need to give it orders, then wait for a member of your colony to get the supplies from your storage areas, then wait for the soap to be created by this same member, then it can be transported to a shower area, for example.

The whole supply and delivery chain must be monitored and setup by yourself. When your colony builds up and you have multiple things happening across multiple planets, it suddenly becomes a daunting task. There’s no item matrix, either, so you can’t easily just look for an end product to produce and see what you need to create it, like what you might find in some variations of Minecraft.

This is mostly personal preference, however. There are probably some of you who have read that and have navigated to the Steam page. Hold up though: I have another major issue, and that is with the AI. When you create a task, it is incredibly infuriating to see a colonist the other side of the map assigned to it, so you have to wait for them to lumber over. I had another colonist with Narcolepsy, who then developed “Gastrodisaster”. Vomit everywhere. The treatment was a visit to the Doctor Desk, and rest in the Hospital Bed. Even after multiple visits to the desk and the bed, she still has it. I have no idea what to do now because the game doesn’t help. This is just compounded when they start getting attacked, only to ignore their attacker because they must keep walking, even if their path gets blocked. 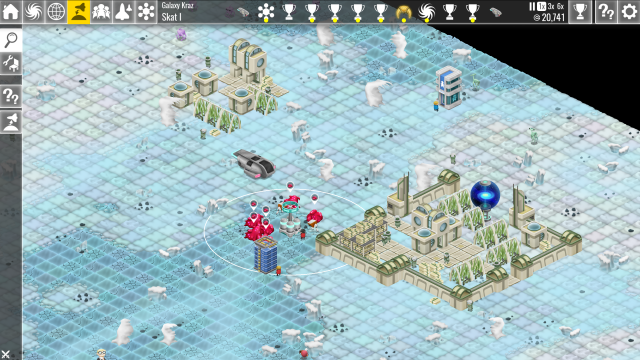 There are other little niggles here and there, but they are mostly quality of life adjustments. The only people I can recommend this game to are those who really love strategy games, and have played others to death. Otherwise, if this is your first foray into the genre, you will very quickly find yourself stuck or getting bored with the micromanagement.

The Spatials: Galactology (Reviewed on Windows)

If you’re a veteran strategy guy up for a challenge, then The Spatials: Galactology could be right up your street. Otherwise, it’s a hard sell. Some of the issues make me think that it might have benefitted from a little longer in Early Access.