In the future, scientists have discovered an asteroid that is half the size of the moon and is heading towards Earth. Though it won’t hit for another 1,000 years, there is a plan underway to blow the asteroid up and save the world. With this short introduction out of the way, welcome to the The Superfluous, both the name of your ship in the game and the title of this sci-fi, rogue-lite, platformer.

This title sets up the scene with a rather funny opening story section that gives the player some context to the world and the mission ahead of them. Beyond the initial world building you won’t see much else in the way of character development or plot progression beyond a few comments made now and then. Now and again you are presented with a few dialog choices that deliver solid writing and helps to get you in the mood of the game. The same cannot be said for the UI and the tutorial, though, as both are a bit complex and rather messy. However, once you get your head around them you will soon be able to jump into missions and try to save the world. 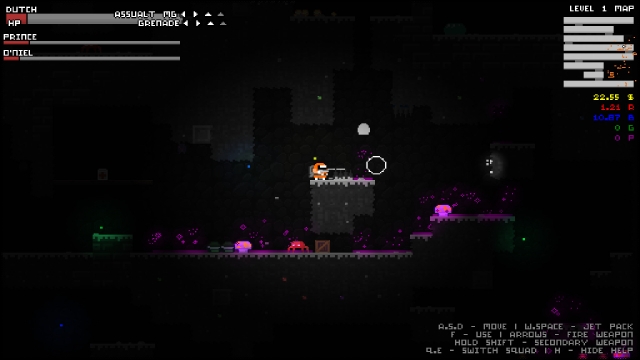 The main thing to note about The Superfluous is that you control a number of characters at a time and swap between them on the fly. As each character has different gear, they have different uses that can let you build interesting combos depending on which character you take into a mission. Thankfully the title includes local co-op with up to four players and even an arena mode for you and friends can sit down and play through the game together, which helps add to the life of the title. It means you can have more than one character on screen at a given time, helping you deal with some of the tougher encounters.

Controls are where The Superfluous really starts to struggle and makes the gameplay rather difficult to enjoy. Both the keyboard and controller layouts are a bit of a pain, and even though they are remappable, it doesn’t help too much. The movement is pretty straight forward, with a jetpack to help you get around, but the shooting is rather awkward: you're only able to fire your gun in four directions at a time, but which direction is linked to what weapon you are using. Some guns cannot be fired down but others can, some weapons are long-range and others are short-ranged, so on and so forth. Once more your characters secondary weapons are on a recharge, so making sure you don’t use them at the wrong time is key. Because you are always going down deeper and deeper into the caves of the asteroid, you find yourself watching every step. Enemies are hard to see and digging through the rocks can take time, and in the end it becomes a bit confusing as to what is going on. This is not to say that the gameplay is horrible - in fact it has promise, it is just a shame that the controls are by design not that enjoyable. Likewise, the randomly generated levels can really screw you over at times as this rogue-lite features a number of punishing and rewarding systems. From the perma-death to the perma-progress, you will need to grind through levels to find enough materials to upgrade your characters and improve your chances of survival.

Though The Superfluous has a number of interesting ideas and gameplay mechanics, none of them feel polished or refined enough to make the title stand out. Even the visual style and audio design makes it hard to even take away the most basic of information you need to in order to play the game effectively, and in the end so many elements just miss the mark and result in a lackluster experience. The few systems in place that are engaging are sadly not so for very long, and as a whole, The Superfluous is a title that can easily be overlooked.

The Superfluous (Reviewed on Windows)

The Superfluous has a number of interesting ideas and gameplay mechanics, thought none of them feel polished or refined enough to make the title stand out. The few systems in place that are engaging are sadly not so for very long, and as a whole, The Superfluous is a title that can easily be overlooked.