Bridging the gap between seasons one and two of Telltale Games' phenomenally successful The Walking Dead comes this short appetiser, bringing with it all the split second instinctive decisions and moral judgements that veterans of the first season have already become accustomed to.

We (should) all know what to expect from this by now. The first season of The Walking Dead thrust you into having to make painful decisions about the fate of other people at a regular occurrence, many of which had direct and indirect consequences on your story, and 400 Days is no different. Here, though, instead of following one man's story, you are given five survivors, and one by one you play out their own individual stories and experience their turmoil and tribulations in getting to the eponymous climax of the story, 400 days after the zombie outbreak. 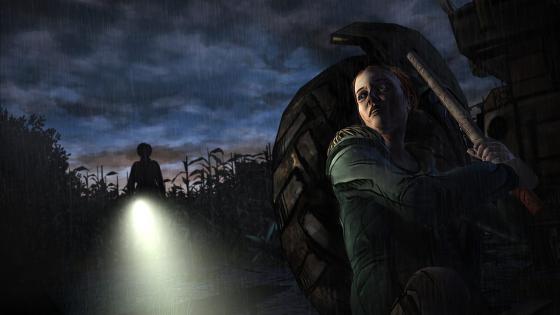 All stories, in one way or another, involve a place called Red's Diner, and it serves as the game's focal point. One of your chosen characters plays out their entire story there, another glimpses it on the road. All stories intertwine with each other, and you can play through all five in any order you wish, allowing for a rather unique and personal story. I recognised a couple of people I encountered at the end of my fifth character's narrative as zombies from a previous story, which made me sympathise with them as I knew their fate. Another person's playthrough would see them as alive-and-well humans first, and later see them as the undead, and I adore the fact that there are many different ways to experience the same story.

The plot, despite potential problems with the intricate nature of five simultaneous plot threads and the entire cause and effect nature of your constant decision making, never gets too complicated, as primarily this serves as a 'how it all began' precursor for season two. There are a couple of issues I found with the causality within the game however, which I never experienced throughout season one, which is a shame. For example, in trying to escape a chain attached to his ankle (I'm really trying not to give too many spoilers away!), my character, Vincent, decides to shoot at it with his gun (a decision I made) and fails. Moments later, a dialogue option appears - "I could shoot the chain", to which his acquaintance says it wouldn't work.

Another example is an NPC suddenly having a rather bloodied shirt for a couple of scenes and have it return to perfectly clean in an instant, leaving me to wonder about the chaos theory of my previous decisions and what choice I could have made before to wind up getting this poor guy covered in blood. 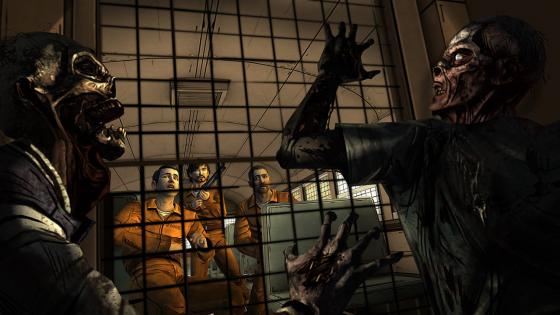 Decisions you make in 400 Days are naturally going to affect all manner of happenings in season two, staying true to form. What is also promised by Telltale Games is that certain decisions you've already made from season one have influenced 400 Days, but I struggle to see at what point this is true. I encountered a couple of minor characters from season one who I didn't expect to see, but their influence on the story was negligible. But overall, the five plots are all engrossing in their own ways and provide a few unique takes on a zombie apocalypse, which one doesn't get to say very often in a massively diluted genre.

The script, while in most parts is impressive and stays true to its comic book and previous games' routes, at times feels lacklustre and soap operatic. There's a small amount of summing up of entire situations amongst people who all know this information anyway, and inadvertently breaks the fourth wall as you realise all this dialogue is for your benefit and not for any of the people on screen. Particularly as the end of the game approaches and all the characters start arguing amongst themselves, mentioning in tedious detail things that happened because of decisions you made. While not too annoying or disappointing to really spoil the overall enjoyment of the game, it's a pity to see the high standards of Telltale Game's magnum opus slide in this way, and can only hope a little more care is taken with the scripting when season two arrives later this year. For the most part, though, characters are well-rounded and you do begin to feel for them in a short space of time thanks to decent script writing and flawless voice acting 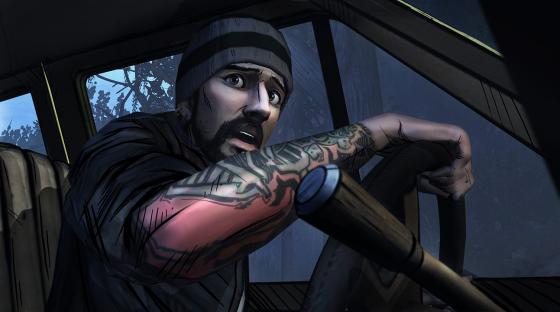 The only other issue I have is the length of the game overall. I know it's only meant to be a pre-story to whet our appetites for the forthcoming follow-up, but it is perhaps too short a game to fit five whole stories into. The Walking Dead we all know and love had a great deal of compassion and pathos attributed to it due to a great relationship between protagonist Lee and young girl Clementine, and gut feelings and emotions were formed on everyone we met, meaning we cared when one died or had any harm done to them. 400 Days presents you with a character, throws a couple of instinctive and / or impossible choices your way, and by the time you start to feel anything for anyone the story ends and you're doing it over again with someone else.

400 Days took me just about a couple of hours to play through to the end, including having to pause the game to rock a baby back to sleep. It is certainly shorter than any of the original episodes, but it is still very cheap, and the perfect teaser for the upcoming, and much anticipated season two. I left The Walking Dead: 400 Days feeling impressed, hungry for more, but most importantly depressed at some decisions I made, thinking "did I make the right call?" about many of the game's heart-wrenching encounters. The fact that a pretty short story has had me question my own personal morals and belief system for an entire day afterwards has got to be worth a punt, no?

Bridging the gap between seasons one and two of Telltale Games' phenomenally successful The Walking Dead comes this short appetiser, bringing with it all the split second instinctive decisions and moral judgements that veterans of the first season have already become accustomed to.

I really need to get round to finishing the first season!.. Great review nevertheless. No spoilers :)