The Wild At Heart Review

The Wild at Heart is an action-adventure that blends the mechanics of Metroidvania-style games and Pikmin, coming to us from developers Moonlight Kids. Although it’s a visual and audio treat, is this charming-looking game all style and no substance? 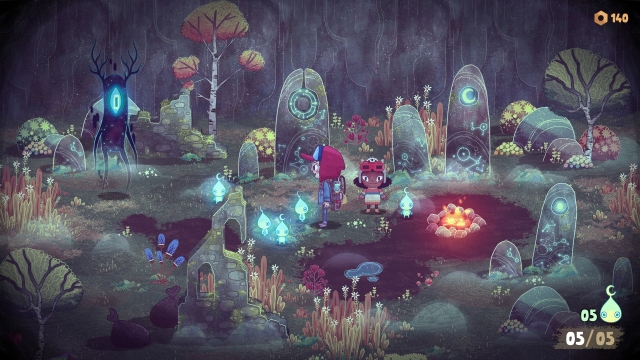 The opening moments of The Wild at Heart really make you feel for the protagonist Wake; It’s clear that he comes from an unhappy home. A father that drinks too much and doesn’t take care of his son, the litter strewn all over the floor, and the empty kennel in the back garden where Wake talks about how much he misses his dog... it's clear that he comes from an unhappy home. Accompanied by some very sad (yet beautiful) backing music, it immediately makes you care for our young hero as he leaves home to seek a happier life in the woods with his friend Kirby (unfortunately, not that Kirby).

It isn’t long before the tone shifts, and Wake finds himself lost in another world. Armed with his make-shift vacuum backpack the “Gustbuster” (which handles similar to the Poltergust 3000 from Luigi’s Mansion), he stumbles across a mysterious old man named Grey Coat, leader of a group of magical beings known as “The Greenshields”. Accompanying him is a “Spriteling”, a kind of fairy-like forest creature which Wake can command to perform a variety of helpful tasks to further his progress. From here he must escape the depths of the woods to find sanctuary in The Greenshields’ home —The Grove— whilst also searching for Kirby. You soon learn the true reason Wake and Kirby are in this new world; the forces of darkness, The Never, are slowly growing in strength and it’s up to our two heroes to restore order within the woods.

Whilst the tale told has a surprising amount of backstory explained by various NPCs, the characters —excluding Wake and Kirby— don’t feel fleshed out enough to give The Wild at Heart a truly memorable cast. This doesn’t stop it from having an emotional narrative, with both of the protagonists coming from broken homes, the former being haunted by nightmares of his father throughout the adventure. It’s a difficult subject matter to tackle, and may even be too much for some players, but The Wild at Heart doesn’t go over the top to the point it becomes uncomfortable to read, and it gives extra weight to an already touching story. 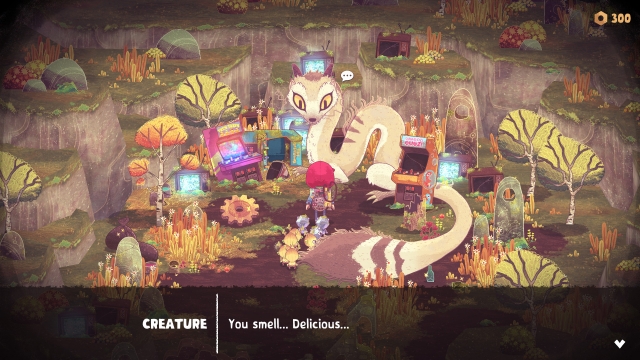 As mentioned at the beginning of the review, The Wild at Heart is a simply gorgeous-looking game, reminiscent of other titles such as Knights and Bikes, Broken Age, and Don’t Starve. The stunning 2D hand-drawn style meshes well with some of the most creative character designs I’ve seen in years, to create what is essentially an interactive piece of art.

Perhaps even more impressive is the soundtrack, a fantastic collection of lo-fi songs that wouldn’t be out of place in a yoga class or meditation session. Composer Amos Roddy already has some stirring videogame soundtracks under his belt, but The Wild at Heart’s has a magical pop to it; whilst it won’t be stuck in your head for days on end, it is certainly one of the most relaxing ones I’ve heard in a long time.

Although the story may not keep every player engaged, wandering around the game's rather large, varied world will potentially be what keeps players hooked. Gameplay consists of exploring areas, collecting items used for crafting along the way, as well as building up your miniature army of Spritelings to help you perform tasks or fight the various enemies in order to reach your objectives. Different types of Spritelings have unique abilities, such as the Emberlings that can set fire to dry bushes, allowing you to reach new areas; there was just enough variety in types for it not to become too overwhelming, nor too samey. 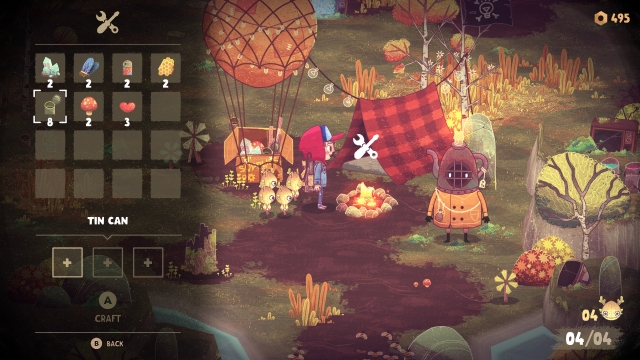 The Wild at Heart’s simple gameplay loop requires you to use your Spritelings to forage for items used in crafting (a basic mechanic that allows you to craft health items and such), solve basic puzzles, and access new areas to further the plot. In addition, some puzzles require the player to split Wake and Kirby up, each taking some Spritelings to aid the other in progression. This eventually became a slight issue, as I found the gameplay a little stale after long stints, but found myself enjoying it more when played in short bursts. There is also a fair amount of optional backtracking, should you wish to discover previously inaccessible areas for rarer items or upgrades for things like your health and Spriteling capacity, and whilst it’s not essential, it’ll make your experience more manageable.

Combat is very basic: You direct your Spritelings towards a creature and wait until its health bar is depleted. Nothing impressive, although the main focus here isn’t fighting, and thankfully there isn’t an overabundance of enemies to take up your time. Then there’s the nighttime, when it gets truly dangerous to be away from a campsite. Ghostly entities, known as The Never, relentlessly pursue you and can cause a game over very quickly. There’s a slight risk/reward system here, as certain chests only appear at night, but generally it’s best to just hotfoot it back to a camp and sleep until the next morning.

Overall, I enjoyed my time spent in the woodlands of The Wild at Heart; with some more variety or expanding on the mechanics already in place, this could have been a potential game of the year contender for me. Having said that, I would wholeheartedly recommend it, especially for all you Pikmin fans out there.

The Wild at Heart (Reviewed on PlayStation 4)

Part Pikmin with a splash of Metroid, The Wild at Heart takes these concepts but never utilises them to their full extent. That said, it is fun in short bursts when you need to unwind. With a touching plot and beautiful hand-drawn visuals, this is an impressive first outing for developers Moonlight Kids.

The Wild At Heart gamescom Trailer

The Wild at Heart