Thomas Was Alone is essentially a platform game. Look deeper though, and you'll see that the platformer's DNA has been spliced with a puzzler in the vein of The Lost Vikings - a game in which a team of Vikings with different abilities work in tandem to overcome a set of obstacles. It's not just mechanics that make this game worth playing, though, it's also a story... about friendship.

Thomas isn't alone for very long, you see. The game is split into 100 levels, which are divided into ten chapters, with each chapter introducing a new character. It feels strange talking about featureless, coloured shapes as characters, but coupled with the brilliant narration from Danny Wallace, Thomas Was Alone manages to eke out more character from these quadrilaterals than many games with human characters could ever hope to. 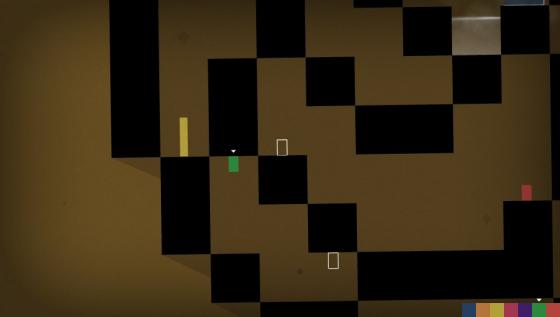 The story takes place inside a computer mainframe in which the AIs inside have grown rogue personalities - essentially becoming self-aware and deciding to try and change the world around them to suit their needs, much like humans.

It begins with Thomas, a red rectangle, who can jump relatively far and has an optimistic outlook on life. He is alone, and the game introduces you to its base concept of guiding a rectangle across other angular shapes to place them inside of another shape which acts as a portal. You with me?

With each chapter a new personality is introduced, the first of these is a squat, orange square who is a bit down, because he's short, squat, and probably because he's a square, too.
His name is Chris, and on his own he's pretty useless, with the player switching between him and Thomas to give him a metaphorical leg-up to higher platforms. 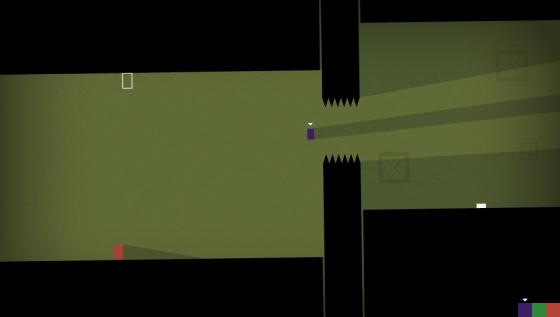 As each chapter passes, more and more shapes are introduced, each with their own unique abilities. There's John, a slender yellow rectangle who gives Thomas a bit of jump envy by throwing himself around the levels like an angular banana that's been genetically spliced with a flea. There's Claire, who is a big fat square who jumps like I do, when I'm sat down with my legs crossed. Claire is seemingly useless at first, but you soon find that she can float on water and then she acts as a ferry for the others to cross the water atop of.

Then you have the others: Laura is a horizontal pink rectangle who acts as a trampolene for the other AIs, James is a green version of Thomas but with gravity switched so that he walks on the ceiling, and Sarah is a tiny little rectangle who can perform a double jump.

As the characters are introduced the complexity slowly grows, with the player switching between them, using one's strengths to overcome another's weakness. They must all touch the end portals at the same time, and the game often hangs these in mid-air, meaning the player must stack them in the correct order - and in one instance the portals themselves are moving, leading to vigorous chin stroking. 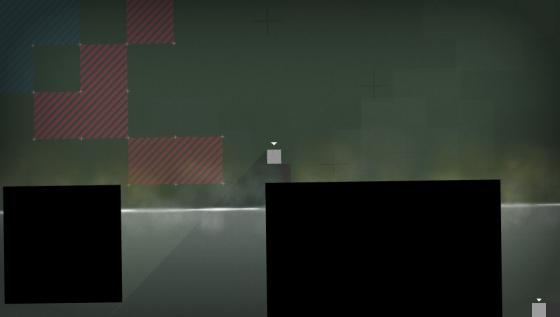 The only real shame here is, as the complexity builds, levels often - instead of letting you use all the shapes - restrict you to a handful of the characters. Because of this, the difficulty kind of peaks two thirds into to game, and in turn some of the later levels feel like filler.

It's a shame, because some of the missions evoke a sense of intelligence not often seen in modern platforming design. The sections where you use the gravity-defying James to use another character as a platform - essentially flying across the map - stand out. Some of the more ingenious sections actually make you feel like you've tricked the game with your solution, which is extremely satisfying.

Once all the characters have been introduced, the game throws another mechanic at the player, one which I won't spoil for you. This new mechanic led to some of the more frustrating sections of the game, though, and at one point I needed one shape to help another and it was impossible to get them back together, causing me to restart the level. Considering there are 100 levels here, it would be unfair to concentrate on a one percent problem, though, and I didn't encounter any other bugs.

The only other issue I had was with my colour blindness, which made my character selection a bit more fiddly than it may be for normal sighted people.

The characters are selected by a multi coloured bar at the bottom right of the screen, and when colours are in close proximity my personal impairment is multiplied - this meant I had to rely on a small arrow that appears above each shape when selected. This isn't game breaking by any stretch of the imagination, but it led to player selection being a less streamlined process - the option to assign shapes to a quick select button would have been preferable, especially since only one button is ever in use.

The visual style is abstract, to say the least, with clean edges and not a circular object in sight. The simple aesthetics are complemented by a subtle play on shadow and light, with the shadows often warning the player of an incoming moving platform, or lining up a landing after a long jump. The only time the visuals don't hold up so well is when the camera zooms upon an AI falling into water, where there are noticeable jaggies. 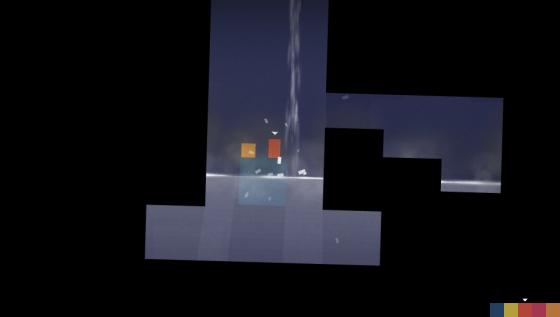 These little criticisms are for the sake of balance, of course, and they didn't impact my enjoyment in any meaningful way. It's still the most fun I've had with either of the two genres the game splices together that I've had in a long time.

Thomas Was Alone is funny, cleverly designed and brilliantly priced. It's testament to the development team that a bunch of squares and rectangles exude more personality than all of David Cage's creations, so far. Who needs more polygons? All we need is good writing and delivery - an intelligent player's imagination will do the rest.

Thomas Was Alone (Reviewed on PlayStation 3)

Thomas Was Alone is essentially a platform game. Look deeper though, and you'll see that the platformer's DNA has been spliced with a puzzler in the vein of The Lost Vikings - a game in which a team of Vikings with different abilities work in tandem to overcome a set of obstacles. It's not just mechanics that make this game worth playing, though, it's also a story...