If there’s one thing you could say immediately about Titan Chaser, it’s that the idea of media being “proof of concept” isn’t always a bad thing. This game is the latest commercial release from Ukrainian developer shostak.games, a solo developer, known for providing big mechanics in small spaces. Whether it’s the soulslike Katana Kata, or the cynical shmup JASEM, they’ve dipped their hand in all kinds of cookie jars, with Titan Chaser being their first open-world adventure.

You play as a young woman who, despite her hometown being in lockdown, has managed to acquire a new job. Stationed outside Bright City, she moves from her cramped apartment to a rural motel, tasked with repelling titans away from the city and back to more quiet stomping grounds. Assigned tasks by her boss Jasper, the game chronicles her journey getting to grips with how to handle these larger-than-life beasts, and the compromises she’ll make as she goes deeper.

Titan Chaser is as straightforward of an experience you can get without the game turning into quick-time events. You’re given a task by Jasper, it comes with directives involving what the titans like, what they dislike, their preferred homes, which season of True Detective they think is the best, and has you on your way. Armed with a car, a spotlight that sits on the roof, and a cassette tape full of radio plays and lo-fi beats, you’re free to roam around the countryside. 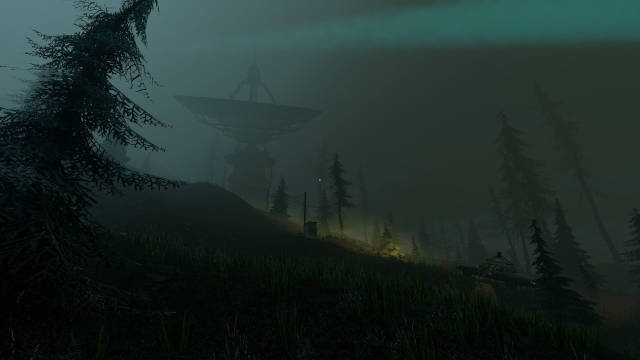 Despite the game forcing you straight in at the deep end, it can still be welcoming, even if it isn’t immediately accessible. The car controls are similar to those featured in Jalopy or The Long Drive, requiring you to operate each piece individually in first-person, but the titans rarely demand more than merely being pointed in the right direction. It almost feels basic at times, the requirements falling apart once you realise that the titans can’t actually hurt you even if they wanted to.

For the sake of player freedom and the narrative qualities that unfold, it’s all very streamlined, despite the size of the game world. It’s surprisingly similar to the ghost hunting title Sylvio, right down to the protagonist who should be more interesting than she is. While both games can overlap with their experiences of the unnatural and supernatural, they distinctly share voice actors who lack the conviction and direction to let these story beats play out properly.

Titan Chaser had the potential to be impactful with its talks of lockdown, isolation, fear of the unknown, fear of letting go, and imagining the history this job has, but its direction lets it down. The protagonist’s performance is a severely weak link, one of two that bog down the potential this modern retelling of Shadow of The Colossus has. The other problem is something you could certainly look past, although it isn’t a pretty sight... 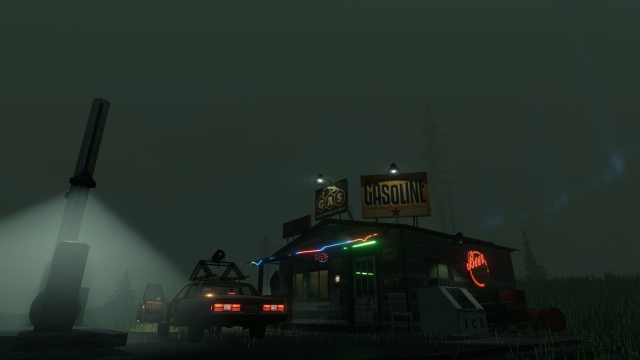 No, literally. Titan Chaser doesn’t look good. The night-time aesthetic does a lot to hide much of the awkward visual design, such as the towns being grossly stitched together with awkward platforms. However, it’s when you shine a light on the titans themselves that the cracks begin to show. Between wyverns and krakens, the level of detail and shading on each titan varies wildly, and the context isn’t there narratively to explain why.

Still, there’s something about how unsightly this game can be that seems appropriate. It’s a five-dollar game, designed to be completed in around two hours, speeding past everything with finesse while also being meaningful in some capacity. It’s a testament to both capsule entertainment and background gameplay, and it’s a technique that shostak.games almost have the hang of. The old adage of this being an experience rather than a videogame springs to mind, as disposable a comment it may seem.

The ambience is a good example of this, with music provided by the Ukrainian electronic duo krapka;KOMA (who also provided their voices for the characters). All of the tracks you hear in-game are provided from their “Quarantine Beats” series, and do well to serve the purpose of filling dead air. The radio plays mixed in with the beats do break the tension though, and are hard to concentrate on while you’re doing your job, but then maybe that’s the point: they aren’t meant for work. You’ve just pushed away two titans for the night, you’re being paid hourly, and your shift ends at 5AM. Park by the side of the road, turn the radio on, whip a notebook out, and listen to the one station blasting obscure internet beats at 1AM. Every once in a while, a plane passes by and reminds you that it’s bedtime, so you switch stations just in time to hear your favourite story of a woman finding out her lover is a giant cicada. Eat your heart out, NoSleep.

In the grand scheme of things, Titan Chaser isn’t the best-playing game on the market, never believably raising the stakes over time, but it doesn’t feel like it’s meant to be. It can only be categorically classed as “a vibe”, feeding into a cultural movement that finds righteous pleasure in lethargy. Once you’re done with it, you’ll find you have a lovely interactive screensaver on your hard drive, one that stands toe-to-toe with 10 hour YouTube videos of Oblivion dungeon ambience.

An open-world experience that loses interest in its own promising setup over time, before finding renewed interest in the idea of “AFK gameplay” instead. An experiment that just barely succeeds in its endeavour, despite uninteresting characters and lacking visual design attempting to drag it down.