Fire up Trackmania from the Wii menu and you're immediately presented with a brisk, crisp and stylish intro clip that is sure to get the blood circulating. Once you've set up a profile - with three separate slots available for different users - there is the choice of single player, track editor and multiplayer. We'll start with the track editor since this neatly explains the unique concept of Trackmania. All tracks are built from ‘blocks', which range from simple straights and bends to jumps, loops and speed boosters. The Wii controller and nunchuck work better than a normal gamepad ever could for controlling the placement of blocks and rotating the camera, however it can still be a little fiddly and difficult to get to grips with at first.

Within a few minutes though a first simple track can be built and tested. An hour or two later and a delightfully detailed raceway extravaganza can be built. A memory limit restricts the number of blocks that can be placed in each track, but we managed to build comprehensive tracks one minute in length without ever reaching the size cap, so the only real limitation to a great track is your own imagination and creativity. It's fine and dandy making these tracks but what to do with them once completed? Regrettably, with this console version, tracks can only be shared with friends who similarly own Trackmania Wii, so it is unlikely that your hardship will be appreciated by many, unlike the huge potential offered by the PC version. 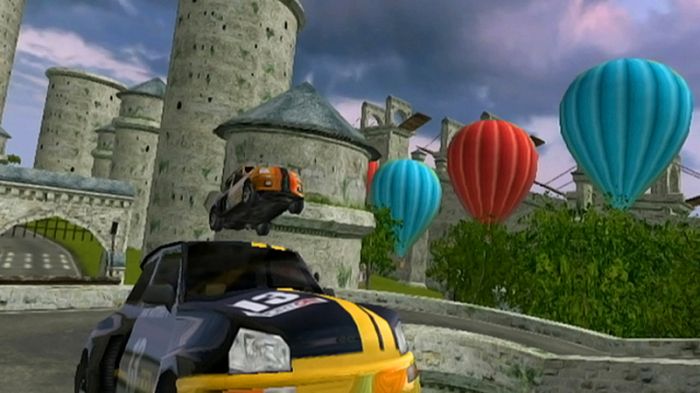 Do not lose heart though: Trackmania Wii ships with more or less 200 tracks spread over six different ‘environments'. Apart from being very graphically different - including desert, coastal and stadium settings - each environment has a unique car with varied handling properties. For example, the aforementioned desert scene has a car with a good straight line speed but is prone to tipping onto two wheels around corners. It should be noted that the ‘bay' environment from the PC version is absent due to being too complex, while the handling of the coast car has been heavily modified for easier accessibility. 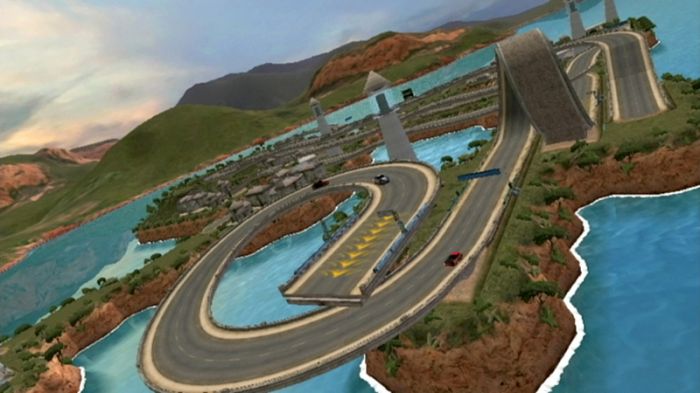 The bulk of tracks are simply race tracks. These are usually easy enough to complete, however the inclusion of graded medals for beating certain times is where the infuriating yet compulsive gameplay elements are introduced. Bronze, silver and gold medals are represented by ghost cars which give a target for different levels of gamers, whilst for the hardcore elite there is also the challenge of beating the track author time. Finding the best racing line and understanding the potential of each car is vital to shaving-off those minuscule amounts of time. 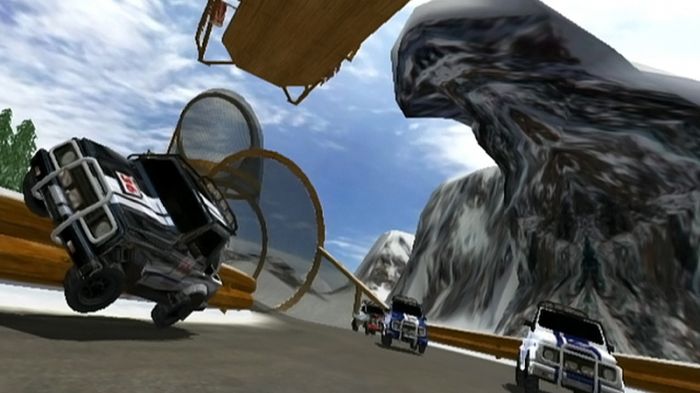 Handily at the touch of a button the car is instantaneously reset back to the course start, so the mania can begin once again. It is this start-crash-restart sequence that creates the whirlpool of an addiction. Get a corner or jump wrong and you could lose speed, uncontrollably somersault or, worse still, whack the nearest accessible chair/floor/ceiling/cat in a fit of uncontrollable rage. The only ways out are to either be physically restrained or simply reach the sweet spots and ace a lap so that all is forgiven, with a wry smile and satisfying sense of relief the reward. 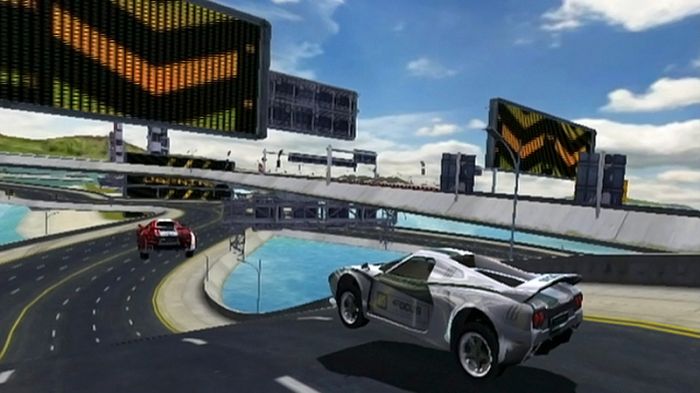 Gameplay is made even more varied with the platform and puzzle modes. Instead of being about completing a track as quickly as possible, the platform mode is about completing fiendishly tricky tracks. Each has a number of checkpoints to pass through, so make a booboo and you can simply restart from the last checkpoint; the ideal ambition being to complete the track without resorting to any checkpoint resets. Puzzle mode supplies innovative tracks that have a pre-set start, finish and a number checkpoints to pass through, with it being up to the player to finish building the track using a limited selection of blocks. The art to winning the gold medal is to find an ingenious solution and then race it wel to complete the track as quickly as possible. When it becomes tiring racing alone then it's time to take the race multiplayer. This can be done offline with up to four players onscreen at once or alternatively there is a hot seat option. Playing locally with friends is truly fun and the learning curve is pleasingly apparent: those new to the game will be easily beaten but once they have picked up the basics of the handling a closer contest can be fought-out, often in tense and dramatic fashion. Most players though will want to make use of the available Nintendo Wi-Fi connection. Here times and ghosts recorded in the single player campaign can be uploaded and compared to the rest of the world. There is also the ability to simultaneously race with up to six other players from around the globe to gain ladder points and advance up a global leaderboard. Friends can be added by using Wii friend codes but better still rivals can be added after a race to help make it easier for future re-matches. Other than joining up with friends/rivals, the only other way to race is to start a lobby and hope others will randomly join at the same time. Disappointedly, since release day it has been a struggle to find any players to race. Even after leaving a lobby open for 10 minutes only one player became available. Even then they quit after being beaten in the first two races, which begrudgingly meant heading back to an empty lobby. After these two wins we are now ranked 6,800, which goes some way in explaining the problem. It would have been much easier if a player could join a race that is already underway, but alas it seems the only saviour at the moment is an imminent US release that will hopefully help boost numbers, but only time will tell. 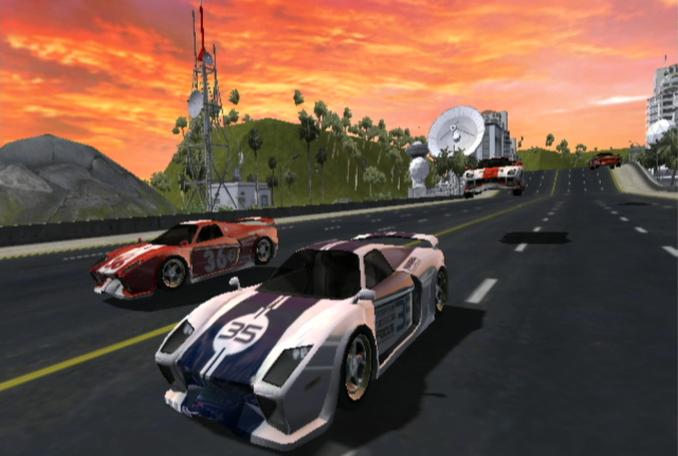 Graphically Trackmania Wii is tuned down from the PC version, but it remains respectable due to the potential complexity and diversity of tracks, plus considering the fact there is seldom any slowdown there is little grief to be had in this department. Sound effects in general are also of a lower quality than the PC version thanks to the limited Wii hardware, and there are only two music tracks for each environment, which isn't a lot considering the high reset count. That said most of the music tracks remained really enjoyable throughout and never really grated, which helps aid that "awesome!" fist punch in the air moment when it all finally goes to plan. No prizes (or indeed author medals) for noticing that this review has been littered with remarks about the PC version. This is for a good reason. If new to the Trackmania franchise then it is wholeheartedly recommended that you get yourself a PC copy of Trackmania United Forever, since that version is bigger, more customisable and has better multiplayer support. If you do not have access to the PC version, or have played it and want a new challenge, then I can still recommend Trackmania Wii simply for the offline experience at a decent price. That is unless you have a short temper, or indeed a cat*. Get a First Look at the (Now Delayed) Upcoming Trackmania Game

Thanks TGK, video review sounds interesting ;) If you (or anyone else for that matter) do happen to get the game then make a post about it and let's have ourselves some races!
Reply

I found it ok, but like any controller it takes a bit of getting used to. Using the Wii remote sensors like in Mario Kart is out of the question for precision, but using the D-Pad to control is like using the keyboard (which many Trackmania players on the PC do) and using the Nun-chuck addition is like having an analogue controller, although I would say it is slightly harder as it feels different not being attached to the rest of the controller!
Reply

hi, I am a new user to this site and joined just now according to me Trackmania is not just a racer but it is responsible making the control system of the Nintendo Wii the perfect platform for a first port to the shores of console land. i like it very much as it is full of interest regards Deepak:u09:u09:u09