I need to start the review with some brutal honesty: I didn’t want to write this review. Not because of any issues with Two Point Campus or anything, but because I really did not want to stop playing it. Two Point Campus is the sequel to Two Point Studios’ 2018 hit title, Two Point Hospital, shedding the bright, sterile hallways of a medical facility in favour of studious halls and classrooms.

Anyone familiar with Two Point Hospital will have a head start; the general mechanics of building rooms and facility management is mostly the same, but a few of the more frustrating micromanagement aspects of the predecessor have been neatly streamlined. One thing I had found particularly annoying in the original was arranging training for staff, forcing them away from work for a solid block of time as well as having to have a senior staff member or an expensive external tutor come to the hospital to train them. This time however, you can queue all the staff with whichever training you want them to have, and they will head to the training room whenever they have free time on their schedules to top up their skills. The reduced amount of staff roles helps keep things going smoothly too. You only need to deal with teachers, assistants, and janitors. Your teachers will teach classes, mentor students in private tuition sessions, and also help with research, whilst your assistants can cover libraries, as well as eateries and other student functions. Janitors will not only keep your campus tidy and well stocked but can also be trained to work as security guards to get rid of unwanted visitors from rival institutions. 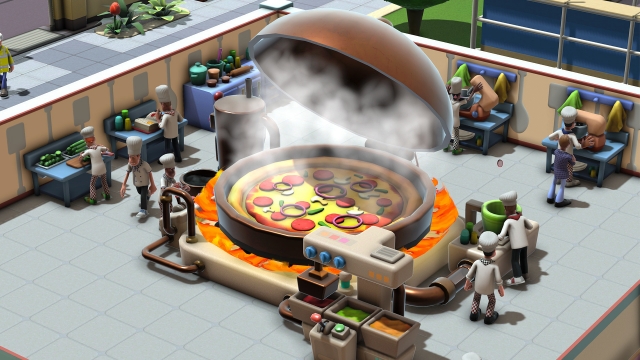 I was going to make a pizza joke here, but that would have been too cheesy.

There are a whopping 17 courses included in Two Point Campus, and your progression through the game allows you to adapt to each one at your own pace. Unlike Two Point Hospital, which saw you have to make dozens upon dozens of treatment and diagnosis rooms to handle the waves of diseases that were thrown at you, Two Point Campus gives you full control of your curriculum, so you get to choose which courses you offer and when you start offering them. Though many of the levels require you to provide specific courses and increase the course levels to progress the objectives, you’re free to take as much time as you want before adding a second course to your university schedule. However, you will still have to increase the amount of dedicated rooms you’ll have for your courses. The first few years of you offering each course means you’ll start with a small portion of students studying Year 1, who will then progress into Year 2 as you get a new portion of Year 1 students in the following year, and so on. Further years on the course will mean more dedicated equipment and items required for your students to complete their projects and get good grades.

Aside from course management, you’ll have to really focus on providing your students with a thriving environment for them to not only learn, but also live it up. You’ll need to provide comfortable dormitories for your students to sleep in and store their stuff, and of course, both your students and staff will need sturdy bathroom and shower areas. You’ll be able to make better facilities as you progress, unlocking new rooms and events through passing objectives, and using the Kudosh — a currency returning from Two Point Hospital — you earn to acquire new furniture and equipment for your campuses. You’ll go from humble student lounges with a couple of couches and vending machines to a bustling student union with top-of-the-line arcade machines and bands performing on a regular basis. You’re also fully in control of the event schedule for the year, booking performances, parties, or course-specific competitions, all of which will help bolster the mood of your students and in turn, their grades. 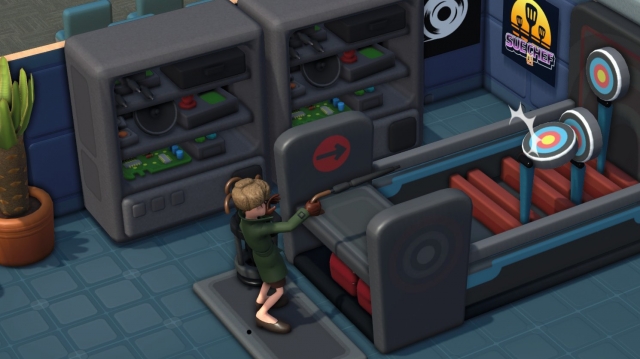 How does that old saying go again? The umbrella is mightier than the sword?

A welcome return is the humour that Two Point Studios had previously infused into Two Point Hospital, which excellently captured the original satirical energy of Bullfrog Productions’ 1997 business sim, Theme Hospital. It’s quirky and a little cheesy at times, but altogether charming. It might not be to everyone’s taste, but it never acts as a detriment or barrier to the gameplay. Two Point Campus also sees the return of the disembodied tannoy voice from Two Point Hospital, with a whole host of fresh, sarcastic lines, as well as some callbacks to the announcements from the previous title. Though some of the lines may get a bit repetitive after a while, there is still plenty of variety in the announcements, and they also help highlight issues around campus. You are able to turn off the tannoy voice if it’s not to your liking though. Two Point Radio is also back, the in-game radio station that acts as the soundtrack. Dealing a healthy dose of Muzak that harkens back to the Theme Hospital soundtrack, as well as a variety of more contemporary tracks, the radio station is also blended with quippy hosts and some truly abstract comedic advertisements, including snippets of the ever-beloved Jasmine Odyssey’s new album.

The visuals remain mostly the same as Two Point Hospital, with Wallace & Gromit-esque character designs that portray a clayish quality, but there has been a clear increase in detail, with various different cliques and social groups being represented. Among your rabble of more standard-looking students you’ll find goths and nerds with their own unique designs, as well students dressed in dedicated outfits for the various courses, such as a full suit of armour for Knight School, or magical robes for the Wizardry course. The level of detail on the various campuses has also been bolstered compared to the hospitals of the previous game, with each area having its own specific sort of biome, such as the Piazza Lanatra campus having a clear Mediterranean touch to the surrounding town, or the Spiffinmoore level with its misty Hogwarts-like appearance. There isn’t a huge change in graphics aside from these pleasant little touches, but it’s enough to keep the game looking modern whilst maintaining the familiar charm. 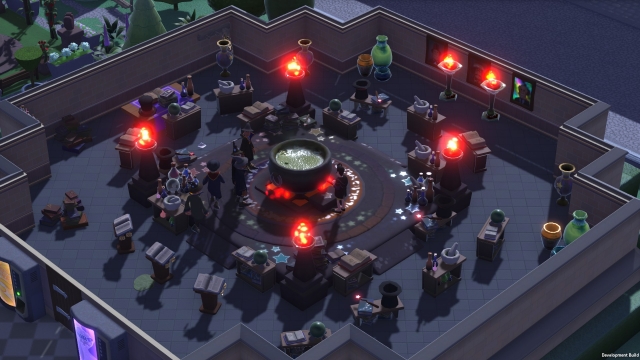 Most students were a little unsure of what to expect of the Co-operative Soup 101 class.

One of the most exciting new features in Two Point Campus is the increased amount of customisation, especially in the form of being able to design and build your own buildings. No longer are you stuck with predefined layouts for your establishments; you can expand your starting building, redesign the gardens surrounding it, and even build spaces for classes and activities outside, like a jousting pitch for your Knight School or a Cheeseball pitch for your budding athletes. The flexibility you’re given with your new building tools allow you to truly build the campus that you want instead of trying to awkwardly fit rooms into crammed parts of your buildings so that you can pass objectives. Some may be concerned that Two Point Campus is eschewing managerial aspects in favour of creativity, but it’s actually a perfect balance compared to Two Point Hospital’s heavier focus on management. There’s still plenty of substance for those who want a challenging business sim, but there’s enough of a balance that more creative-minded players won’t need to restrict themselves to Sandbox mode to enjoy what Two Point Campus has to offer.

Two Point Campus offers a rewarding and rich experience. It’s hard to find faults here without nitpicking negligible things like the odd repetition of a tannoy voice line, meaning that Two Point Campus really is the top of the class.