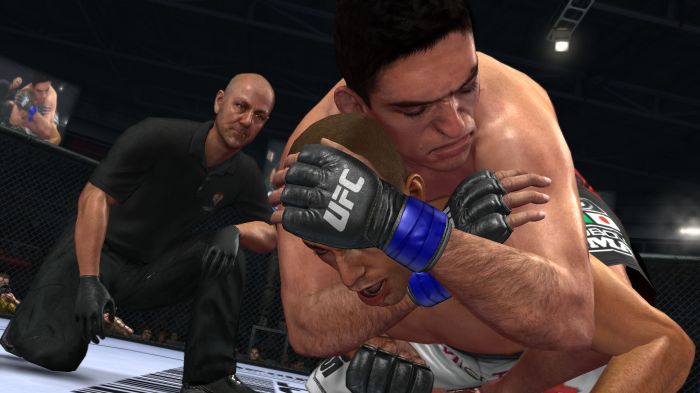 The Xbox 360 and PS3 versions of the game seemed to capture this fighting spirit well when it was released back in September of this year. It got good reviews and was received well by fans of the series. Recently released was the console versions little brother, the PSP version. Can it retain the level of atmosphere and realism that the Xbox 360 and PS3 versions managed to obtain?

UFC Undisputed 2010 manages to cram a lot of features the Xbox 360 and PS3 versions have onto a tiny UMD disk, boasting over 100 UFC fighters (plus up to 40 of your own creations), a choice between 9 fighting disciplines and what moves you use. Real UFC commentators lend their voices to the game and authentic stages from the UFC world on top of nine game modes, including ad hoc multi-player, and an in game shop where you spend points on new looks for your fighters with points accumulated by winning tournaments and fights. There is certainly a lot here for fans of the sport to get their teeth into. 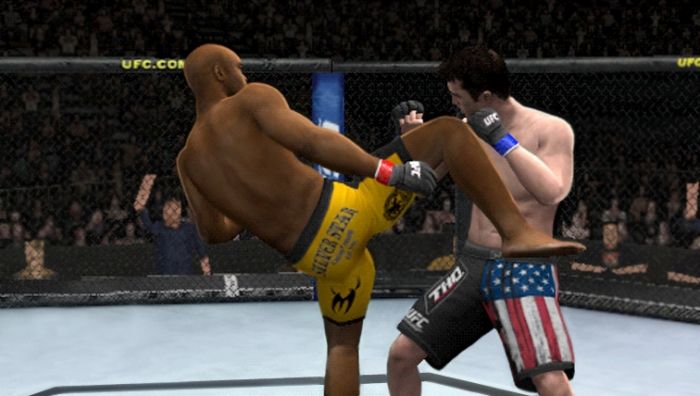 As previously mentioned, there is a large amount of different modes for you to play. Each with differing styles of play, from pick up and play quick matches to a comprehensive career mode there's bound to be something there to keep you amused.

Exhibition is a quick match between you and a CPU opponent, here you can set the match up as you want, changing the settings to your liking, e.g. weight class ( lightweight, welterweight, middleweight, light heavyweight, heavyweight or random), you can change the amount of rounds and CPU difficulty, This mode is good for if you want some no strings attached ass kicking.

Title mode: Is your typical pick a character and climb the ladder with the eventual aim of seizing the UFC championship. Here you can modify how many opponents you wish to fight against, with a choice between 8, 10 and 12 it gives you a little more flexibility when deciding how long you want to play for. 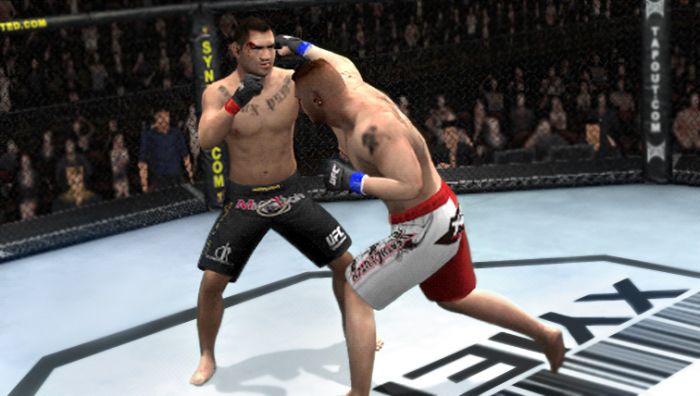 Title defence mode: Unlocks once title mode is defeated. Does exactly what it says it does, defend your title from competitors who want it.

Tournament: Battle it out against CPU controlled fighters until the eventual winner is decided. Very much like title mode but in a tournament style bracket layout.

Ultimate fights mode: Sets up the match with the exact stats and fighters from classic UFC fights. Ultimate Fights mode allows you to play through the most popular and memorable matches throughout UFC's history. Rewards are on offer here if you can match the exact happenings of the real matches, for example in the Kendall Grove v Alan Belcher title match, a class challenge, to score the rewards you must replicate the winning conditions, i.e. - win by submission 2nd round, gain more top ground positions than opponent and land more successful strikes than the opponent. An interesting spin on traditional game modes, the thought of stepping into a favored fighters shoes and fighting in these iconic match ups must be an appealing prospect for fans of UFC.

Career Mode: A staple mode in many fighting games, this one is no different. First off you must create your character. Give him first name, last name and nickname, choose hometown and where he fights from ( I chose, Garath "Savage" Gobulcoque from Sunderland). You then decide their age, unfortunately, you are not able to pick under 20 years old, UFC don't seem to endorse punching teenagers. You are then able to choose all kinds of settings and stats ranging from fighting stances to how strong they are, Once your fighter is to your standard you can continue with the game, you can create and save up to 40 of these characters.

Career mode is your standard go from rookie fighter to champion of the world, with a little help from your coach, plenty of hard work and training and practice. Fights get increasingly more challenging and you build your character up to be whatever you want him to be. 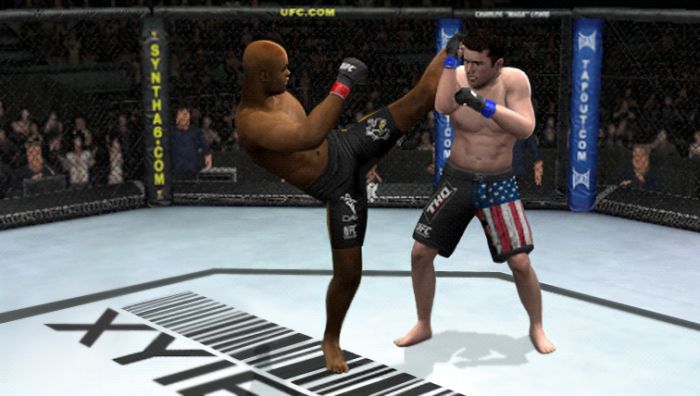 Enough of the modes, what of the game play itself? Fighting is doing using the face buttons and the shoulder buttons as modifiers. Square button is left punch, triangle button for right punch, X button is left kick and circle button is right kick. The shoulder buttons are used to modify the attacks, for example right shoulder button + circle will give you a high right kick which will land a blow to the head unlike the normal variant of that attack which will damage the torso. There are also special moves, grappling and throws that can be done with the right combination of the above mentioned buttons. Its a simple mechanic, which on the whole works well for the limited amount of buttons the PSP has in comparison to the Xbox and PS3 pad configurations, but it can be too simple sometimes.

I was able to knock out every opponent on most modes with less than 5 consecutive kicks to the head making life incredibly easy, I felt I was cheating a little but the same outcome is achieved if you violently mash all buttons Tekken 6 style. It's all too easy to button bash taking any kind of strategy out of the game, of course as you increase the difficulty of the game this approach becomes harder to do as enemy AI get wise to your tactics of randomly mashing but it is still relatively easy to win like this. 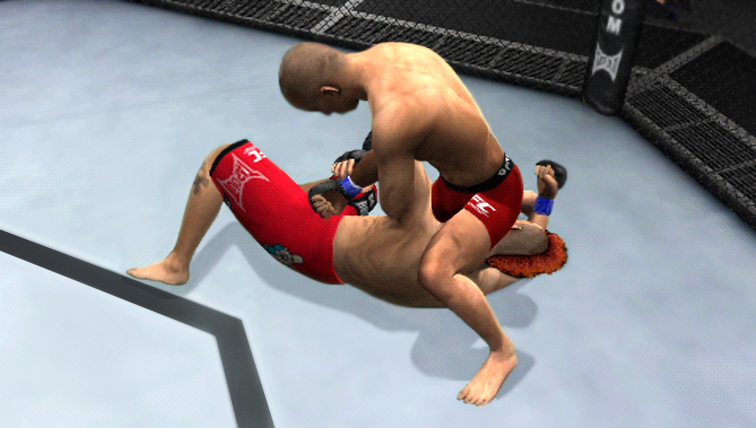 Although the package has a lot to offer, it's not without its flaws. The soundtrack to the game just sounds wrong. For a game like this, I would expect some hip hop playing in the background, maybe a few electric guitar solo heavy metal style Ala WWE games. Instead the soundtrack comprises of dramatic classical music, stuff which you would find in JRPG's when coming up to a particularly heart wrenching emotional scene, not when your about to rearrange someones facial features with a swift kick to the face. It just doesn't seem to match the style of the game and because of this, it becomes irritating rather quickly and impacts upon the authentic atmosphere that THQ have created.

The graphics are also flawed, whilst I am not expecting unrealistic levels of detail akin to the console versions, I do expect to see better than this. The graphics aren't awful at all, but I have seen better and know the PSP is capable of more, but it isn't so bad that it will ruin the game for you. 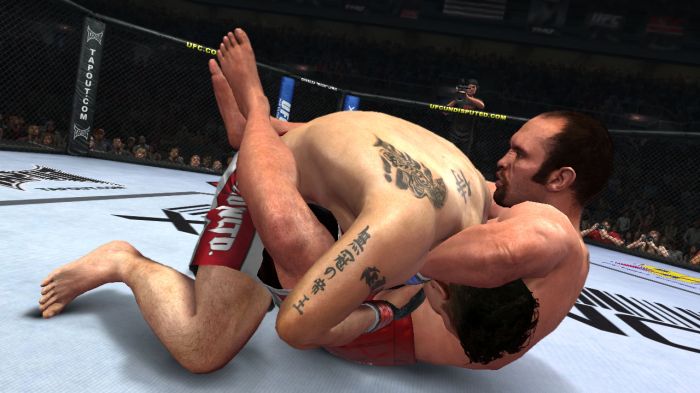 For newcomers to the series, the simplistic fighting style of punch, kick, rinse, repeat may lack the depth necessary to get them hooked on the game, If however you are a fan of UFC then there is a lot here to love, there's a lot of attention to detail to ensure UFC Undisputed 2010 is as authentic and true to the sport as possible and as a result, its a must for fans who don't already own the console version. There's a lot of fun and longevity to be had from this title if you can forgive the slightly lax fight system, poor choice of soundtrack and less than perfect graphical stylings.