Umihara Kawase is a series of games that had its start on the Nintendo Super Famicom back in 1994. You play as a young sushi chef who finds herself in a surreal world of salt and freshwater creatures. She has a bright pink backpack and uses a fishing rod and a lure with rope physics to traverse the level to get to the goal.

Fast forward 26 years and Umihara still has her handy fishing rod and backpack, but this time she uses the lure to grab items, navigate platforms and to stun the enemies. Once she reels them in with the lure, she then shoves them into the backpack to turn them into ammunition for her bazooka. With your bazooka in hand, you blast all the enemies to clear the waves of enemies in the level to obtain the coins needed to clear the level. The trick is to be successful, you need to have the coins collected before the time runs out, or you will have to start over. 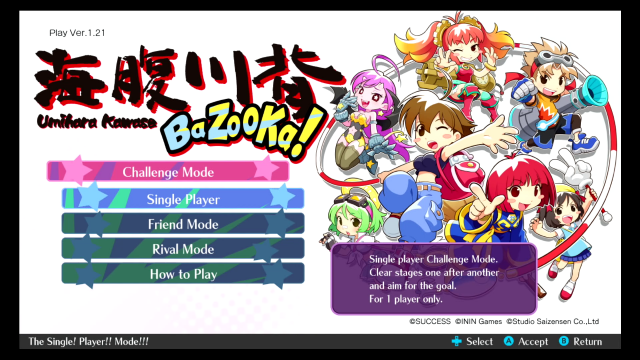 Umihara Kawase BaZooka! Is an arcade-like party game that offers a few different modes of play, you can play solo, or with up to three other people. Multiplayer can be done online or locally and you get to choose if everyone will work cooperatively in a team or if you are going to battle it out and blast each other. When you play multiplayer online you can do ranked battles or just casual modes, and you also have the option to make a private room if you want.

Umihara Kawase features bright and colourful characters, placed in 2D environments with a 3D look to them. All the enemies that you see here, also appear in the earlier games in the series, so if you are familiar with any of the other games, it is neat to see them here again. The music is the same for all ten levels of the world that you are in. It is catchy, but after a while it definitely gets repetitive and can get on your nerves. I also found the bright and cheerful music didn’t necessarily fit what was happening in the game all the time. When you are fighting a big boss, super cheery music feels out of place, for example.

Umihara Kawase BaZooka! offers three different control settings based on whether or not you want to be responsible for reeling in the lure. On the beginner setting, the lure is automatically thrown out at the nearest enemy and reeled in, semi-automatic has the lure being reeled in once it is thrown out and attaches to something, and technical requires you to hold down when your lure attaches to an enemy then walk straight into them to capture, just like the original Umihara games.

Instead of having levels giving you tutorials, the game has the option on the main menu to learn how to play. The lessons are text-based, and they teach you all the techniques you will need to use. These are all quite simple, and it’s nice that they don’t make you complete levels just to learn these techniques. I do suggest reading through these before you jump right into the action, or you could get very frustrated, which isn’t much fun.

When you get into the game itself there are four different worlds with nine levels and a boss fight in each. As the levels go up, the difficulty increases, giving you a shorter time limit or enemies that are harder to defeat. With 40 levels to play, this game won’t take too long to beat, but you can always change up the settings of the lure and your character if you want to up the ante. 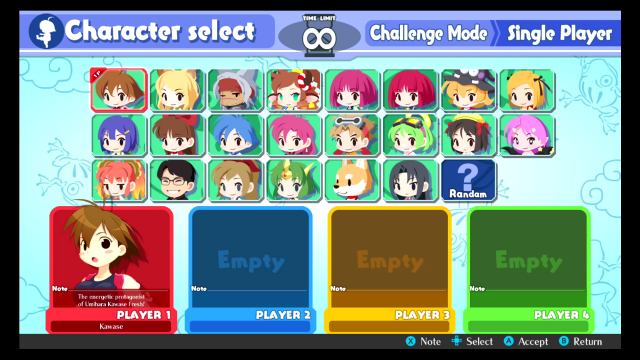 Umihara Kawase BaZooka! features not only characters from the multiple games in the Umihara series but from other games series like Cotton 100%, which was also a Super Famicom title. They even have a puppy and a special character called the YouTube creator. I’m not totally sure if this is based on anyone specifically, but it’s definitely a unique addition!

There are over 20 characters available to choose from each with two of their own special moves which are used by hitting the a or X buttons on the Switch controller. These special moves could include cooking food to restore some of your health or projectile shots that allow you to fly in the air and fire at the enemy. There is also a third stronger move that you can use by hitting the L button, but keep in mind this will use a lot more of your SP bar. Each character has four colour options that will change their clothing and hair colour, if you want a bit of customisation. 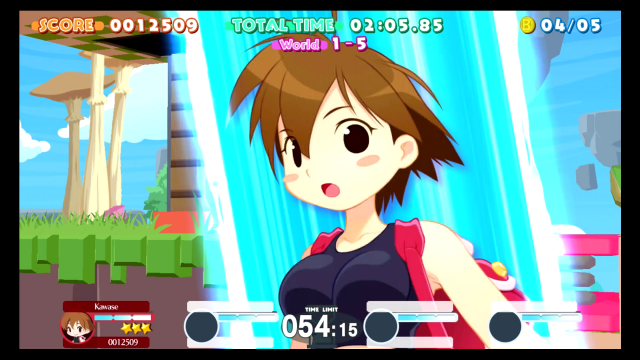 When you are playing it is wise to try to hit as many enemies as possible with one ball. Creating combos will cause a special ball with stars on it to appear. When you pick up and use this ball, it will continue your previous combo to allow you to get a ton more points. Try to avoid getting hit by an enemy because if you do, your character will be thrown into a knockback animation causing you to take big damage and be bounced around. Most of the time I was bounced right into another enemy, causing a never ending loop of knockback animations.

When you get to a boss battle it feels rather underwhelming. To cause the most damage possible to the boss you have to keep hitting him with the lure then when he gets dazed, attack. I found that a lot of the time I was more busy trying to detach the lure from the boss so I could attack, then by the time I got to using the bazooka, they wouldn’t be stunned anymore. 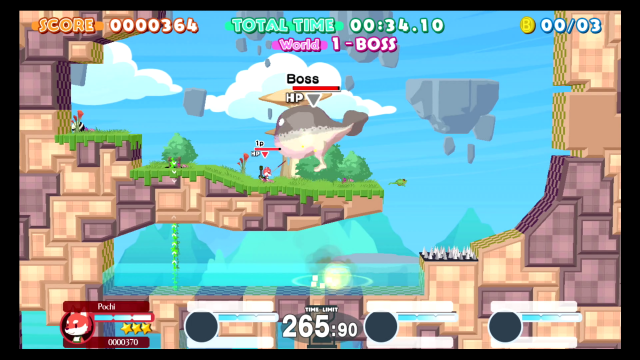 Umihara Kawase BaZooka! is fun, but I found I could only play it in short bursts. The gameplay didn’t change much between levels, so I would get bored or frustrated after a while. If possible, I recommend playing some multiplayer in between just to switch it up.

A fun arcade-like party game in the Umihara Kawase series, the fishing rod and lure are back, but crazy knockback animations and underwhelming boss battles make the game drag in parts.