Undungeon is a pixel-art dungeon crawler action RPG set in a world where the multiverse shattered. You play as the Herald of the Void in a quest to stabilise the world and save the remaining inhabitants. However, your choices along the path will affect the outcome of your journey.

I will tell you straight away that the game has a lot of dialogue. Most of it is hidden through the Herald asking questions of people, as they explain to you their culture, their story, and sometimes even their personality. Whether you like the story of the game and its writing or not might be one of the main dictating factors on your overall liking of it, because a lot of the charm comes from the story and how much your interactions matter in the long term. I came into Undungeon without much care for the story, but afterwards slowly found myself getting charmed by some of the characters — most notably the protagonist.

In most games with this sort of atmosphere where you play as an incredibly powerful creature with the skull of a crow, you'd expect the character to be annoying, spiteful, and overall violent. Although I'm not saying the Herald isn't these things, you can certainly take him down a different path; I was delighted playing as a creature that looks as eerie as the Herald whilst being nice. The game gave wildly different options to choose from, all of which allowed me to lead each side-quest into siding with other people, or none at all. It got to a point in which I found a character that openly told me he'd sacrificed the blood of innocent people in the name of the Herald. I was appalled, so I dematerialized him, which instantly killed him and forced me to find a different way to complete the quest. It was very nice to see actual repercussions to my actions because that same character I dematerialized probably had another quest that I completely missed out on because of my emotional outburst.

Another thing I welcomed with open arms was the Karma system in the game: the kinder you are to people within the dimension, the more Karma you get, which enables you to gain allies around the world and discounts on items from that dimension. 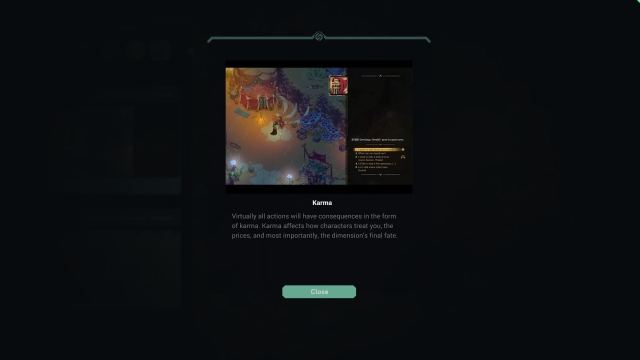 Undungeon has two dimensions that work like the overworld. With each dimension come new foes, new allies, and a whole new karma system.

The map traversal is very welcome. Undungeon doesn't work in a big open-world map where you need to walk in a 3D setting, but rather it enters a screen where you click where you will be walking, and there are tons of things to interact with. As you travel, you might be interrupted by wandering enemies, stumble upon settlements that reward rare materials, find ally traders to restock on items on your journey, or find two warring factions fighting, allowing you to enter and turn the tide of battle — or slaughter everyone present.

I much preferred this over the typical travelling system in games because it makes it effortless to remember what is where; since everything is named and every quest you get is trackable, showing you where to go to further advance it, I never actually got lost. This is made even better by the way the map is slowly revealed as you advance through the main quest.

I could go on about how great the game map is with so many things to interact with — since I spent several hours running around destroying enemy settlements — but that doesn't apprise you of how enjoyable it is to do all of this. 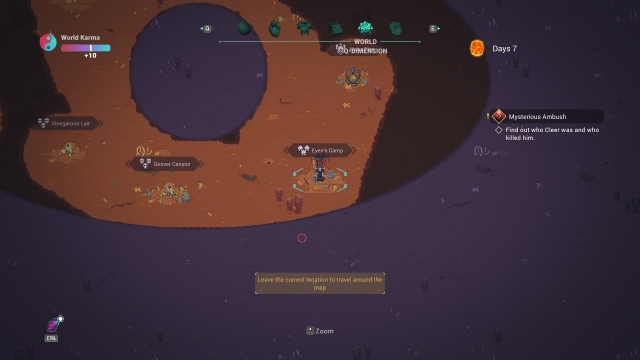 Undungeon's combat is surprisingly deep, and it's not something I expected. It has several unique mechanics in place that make the game very charming and fun to play if you do it properly. Your character can be customised in so many ways that I can confidently say that barely any two builds will ever be the same.

The melee attack has several weapons that you can unlock by finding them in the open world or buying from merchants, and each weapon has different forms of damage, attack speed, stamina consumption, special attack, special attack cost, and stats; the best part is, this isn't even your only form of attack. The Herald also counts on different throwable knives which work as your main ranged attack with more than a dozen in terms of variety, and several different types of grenades as well. Each weapon type has its uses, such as grenades being great against enemies with armour while knives aren't, and melee attacks being a terrible choice against enemies with shotguns — it works like a sort of rock, paper, scissors mechanic.

If that sounds like a lot, that is barely even scratching the surface at the depth that Undungeon has incorporated for its combat system. You are expected to vary and delve deep into these systems to make your journey easier; adamantly sticking to one of the three fighting forms will serve only to punish you in the long run. Especially melee, because Undungeon has a punishment system when you get hit by enemies which increments their strength every time they hit you. This can become overwhelming when facing swarms of enemies and not knowing which projectile is particularly dangerous, but it proved to be very fun in the long run.

By far my favourite system in Undungeon is the organ and organ harvesting system. Since you're playing as an immortal, the only "organ" that matters is the Core (which we'll get to later). Each organ is meant to protect your Core to prevent it from breaking, and each time you take fatal damage you lose one of your organs. This system means that in any given battle you can die several times before you run out of organs. You can then return to the hub to replace them, each with their own unique buffs and passives that assist in even further deepening the depths of which the game offers you customisation. Some organs are meant to be more for aggressive combat whilst others are more defensive, and there are even some that work best when they are meant to be broken. This system offers so much customisation, and I had so much fun gathering the organs of my enemies through autopsies to be able to use them for my own gain or trading for weapons and healing items. 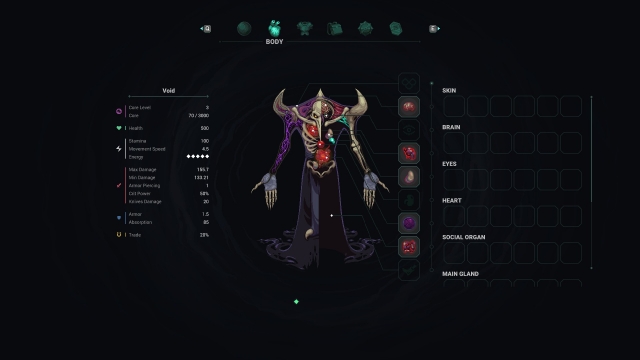 Trading is also a very important aspect in the game. Since your weapons will eventually break, and your grenades and knives will eventually run out, you will be needing a constant influx of replacements. The trading system works exactly the same way as it does in Yonder: The Cloud Catcher Chronicles. The inhabitants don't actually use money but instead trade by equivalence. The organs of your foes work as a great trading currency but some, whilst incredibly expensive, are very much important and necessary, and constantly replacing your knives and healing kits can take a toll on your wallet. This is a good thing, however, because it encouraged me to kill enemies and fight more often to get more organs to continue the trading cycle.

And last, but not least, the Cores. What essentially works as the main organ of immortal beings — most importantly the Herald — can be upgraded with runes and trinkets. There are several Cores for sale at the hub, and each of them have — you guessed it — passives and slots to put runes in, and work for each of their own unique builds. Although I found my personal favourite Core and refused to move from it, I was very happy to see the variety.

The graphics in the game are jaw-dropping, but the sound design doesn't back it up; it's practically nonexistent. The eerie silence, however, made for perfect atmosphere in the game. Although I often like muting music in post-apocalyptic games and increasing the volume of the footsteps for the creepy feel of emptiness, I know some people will be disappointed with the silence in the game. I can confidently say, however, that Undungeon's sound design outside of OSTs isn’t annoying or repetitive. 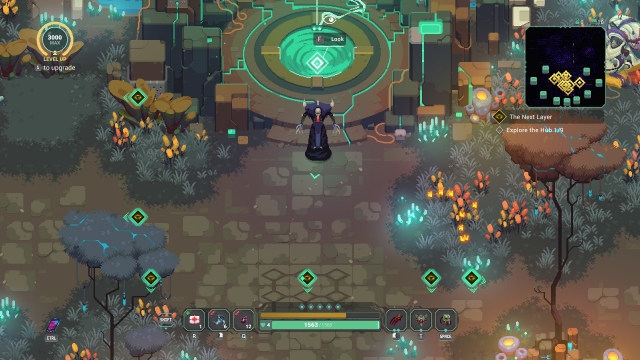 Undungeon is a great experience overall. You just need to come in expecting exactly what it is, which is predominantly a story-based game; with over 150,000 words of text, you better put on your reading glasses. But its sci-fi story is definitely some of the better ones out there. I do want to warn you, however, that the game's first impression felt lacking, but once you get past the bumpy beginning, it’s tons of fun afterwards.

Undungeon is a great game with tons of unique innovative designs that I have never experienced. If the staggeringly large amount of text doesn't scare you off, and a sci-fi story is something you're interested in, I definitely recommend it.