Who doesn’t love a good horror movie? The fear, tension and death wrapped up a 90-minute movie that will either frighten you or amuse. Now, take that concept; the same B-grade teen horror, mix it up with the usual tried and tested cliches, make it entirely interactive and you get Until Dawn from Supermassive Games.

In Until Dawn your decisions and choices affect the outcome of a situation, or decide the fate of the character and others. Taking inspiration from Quantic Dream’s games, creators of Heavy Rain and Beyond: Two Souls, Until Dawn uses the Butterfly Effect and the whole premise is based around this theory. The differences can be subtle or impact the story in such a way that replayability is at the forefront of it’s design. Even the simplest of choices like siding with someone or choosing to pick up something or not can have repercussions. The story within Until Dawn doesn’t do anything original and only serves as a foundation of the gameplay.Taking place in a winter lodge on top of Mount Washington, ten friends gather for their annual winter getaway. After a prank backfires leaving one of the girls, Hannah, to run into the wilderness, her sister, Beth, goes after and events from here take a turn for the worse leading to their disappearance. A year later Josh, the sister’s brother, invites everyone to return to reconcile and find answers. It’s from here where the story of choices, survival and horror begins until dawn.

Until Dawn is structured similarly to a TV show. Each chapter begins with a recap of events, showing you the results of your choices and the impact they have upon the characters; it works, but the nuisance is that it occurs after every chapter and is unskippable as it acts as a hidden loading screen.

Prior to the start of each chapter you are greeted to an interesting discussion with a Dr Alan Hill (played by Peter Stormare), a psychiatrist who asks the player direct questions about their own fears and questions their morality, which adds more immersion to the world and affects the environments. Depending on your choices all the characters are playable and they’re the usual bunch of american teens. The connections between the friends are either childhood friends, ex-lovers, a couple or just “friends” stuck in the category of will-they-or-won’t-they. You're even provided with such information upon introduction. The only standout characters who you are first introduced to are Sam and Chris, everyone else is either instantly dislikable or forgettable. They’re are believable and the acting is excellent from each of the cast, but their personalities are pretty much the same as any teen horror movie that inspired them, and it’s clear that this is what the developers were going for.

Until Dawn’s main problem goes beyond its storytelling: pacing is an issue. At first It’s a slow burner and takes fair amount of time to actually kick in. The slow introduction, like any horror movie, is in place to get you acquainted with the characters before taking a turn for the worse. This is plagued, however, at certain points the game will jump to another character to progress through their part in the story, ending almost every scenario at a cliffhanger. It’s awkward, used to keep you hooked giving you the whole, wait and see what happens next moment.

The same can be said for the gameplay, Until Dawn has some bothersome controls. You get the choice at the start to use either traditional controls or motion controls, I stuck with traditional as motion controls can be a nuisance and I’d rather not be waving my dual-shock controller around trying to move in-game. The game has fixed camera angles, that can be annoying at times when trying to navigate the environments. One minute it’ll be facing forwards and next from behind. Anyone who’s played the older Resident Evil titles will know. 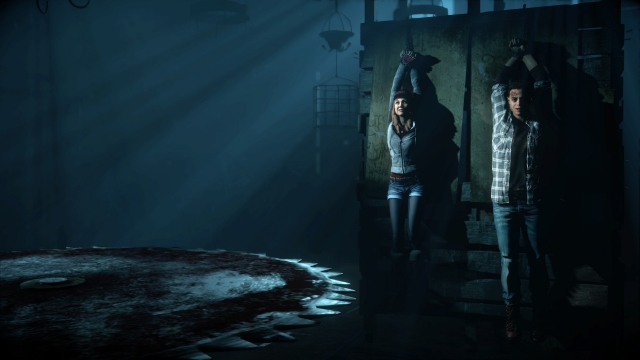 Throughout the game you’ll come across totems, which are more than just collectables. These give you an insight into events that will occur, whether it be some guidance for the future, a vision of a possible character death, loss, danger or fortune. Gathering all these helps build “The Events of the Past” and make the story clear. Other collectables found throughout are clues to mystery behind the killer and past events, these can be picked up using the X button and with the R2 and the right analogue stick you can turn and move objects in a similar fashion to The Order 1886. This is also the same for all other interactions doors, buttons and similar objects.

Your choices are made using the right analogue stick and you can pick one of two options, but when in the intense heat of the moment the game takes over the movement leaving you to with deal with an abundance of quick time events depending how awry the situation goes. It’s cliché gameplay, but in this it couldn’t be done any other way. It is an interactive story after all. 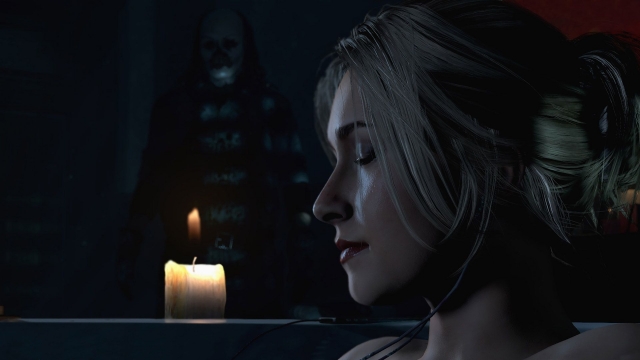 Until Dawn's visuals are impressive, graphically it stands as one of the best looking PlayStation 4 exclusive titles available. The environments, shadows and lighting are all highly detailed and the developers have put great attention to detail in each and every area, whether it is the inside of the lodge, the stormy winter of the forest or an abandoned cabin; detail is everywhere. Sound design is also top notch, with eerie effects that send chills throughout and with music and sounds intensifying a of foreboding and dread, there is even an excellent opening title song called “O’Death” by Amy Van Roekel to give that real movie feel. The characters are the visual highpoint with impressively detailed facial animations, showing clear emotion whether it be laughter or distress.

Until Dawn is an interactive love letter to all things horror. It’s immersive, with excellent atmosphere throughout. Yes, it has it’s problems especially with it’s pacing, but it’s still well designed and thought out. The characters seamlessly interconnect with one another, with your choices and the consequences having an impact on how each scenario plays out and on who lives or dies. It encourages replayability and hides glistening secrets within.

Until Dawn is an excellent addition to any horror fan's PlayStation 4 collection, even if borrowed or rented, you’ll still be satisfied with a single 9-10 hour playthrough, but the seeming unending paths towards terror, gore, death and salvation will keep you coming back to see if you can survive another night until dawn.

Until Dawn (Reviewed on PlayStation 4)

Until Dawn is an excellent addition to any horror fan's PlayStation 4 collection, even if borrowed or rented, you’ll still be satisfied with a single 9-10 hour playthrough, but the seeming unending paths towards terror, gore, death and salvation will keep you coming back to see if you can survive another night until dawn.

Game Over: Until Dawn