Until I Have You Review

One of the greatest joys I had growing up as a kid from the 90s were the games from back then. They were incredibly frustrating since I was constantly dying and all these so called badass “heroes” were super fragile. Seriously? Dying from just touching a Goomba? Come on. But I digress. Somehow, dying so pathetically was fun in a weird way especially when you do eventually beat that level you were stuck on. 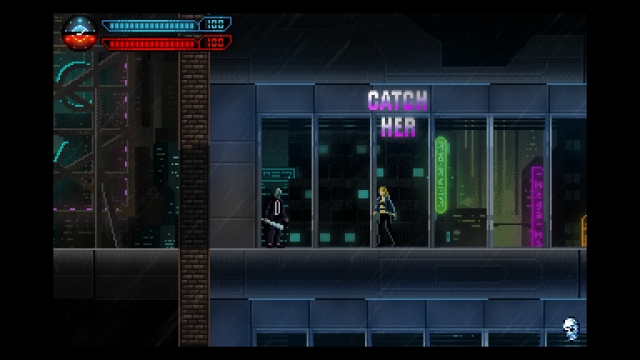 Until I Have You is an indie game developed by Wormwood Studios. It brings back memories of the 80s and 90s with its retro graphics. It is a 2D side scrolling platformer where you run from left to right. Unlike the old games in the 80s, however, Until I Have You has voice acting. Amazing voice acting I might add; not some kind of robotic, techno, electronic, creepy, Dalek-like voice acting.

The game starts off in a cyberpunk setting with our protagonist identifying himself as an “Artist.” Eventually, you will end up in a tutorial level where you learn about your new exosuit. The exosuit honestly just looks like a regular old suit except with an awesome mask. Apparently, it gives the Artist abilities to be faster, stronger, and even have slow down time itself. Granted, when time is slowed down, so are you. Also, the longer time is slowed, the more strain you have on your heart and mind, causing hallucinations. It’s a wonderful concept that I unfortunately rarely used. Why? Because I completely forgot about it and frankly, didn’t really need to use it.

Once you complete the tutorial, Artist begins his rampage. Here is where I got confused. If you read other reviews, especially on the Steam page for the game, people rave on and on about the story. For me, I didn’t find the story all that great. It was…confusing. Here’s the premise. Guy is a thief. Guy has a girlfriend or a wife. I seriously do not know since they kept jumping back and forth between the two that I have no idea if they are married or not. You know what? I’m going to go with “friend with benefits.” This friend with benefits of his wants him to quit being a thief. He quits. Some hotshot client gets mad and kidnaps friend with benefits to make Artist do one final job. Artist goes on rampage killing everyone and everything. But…who is he rampaging against? The client or the final job? Is he actually doing the job or is he killing the client’s network and army? I am so confused. There are also scenes between levels where you end up in the Artist’s apartment. You can watch TV and see what happened in the world because you successfully completed the previous chapter. I wish that I could have done more in his home though. The voice acting in this game is decent. I did enjoy the narration and don’t get me wrong, the Artist has a pretty sweet voice actor. The other characters do as well except for the first female character you encounter but that really is not her fault. See, the main issue I have with the voice acting is that they pause after every sentence for about two or three seconds. I guess a great example of this would be if I go up to the bartender and ask for a martini and he stares at me for three long seconds before asking “Shaken or stirred?”

I cannot stress just how annoying that is. The dialogue is sort of funny and amazing, but the pauses…dear lord, the pauses. They drove me insane. The entire time I was literally yelling at my computer, “Just say your damn line already!”

The controls themselves are pretty solid, as well as the music. I know that there is a time slow feature that I barely used. Why didn’t I use it? Well, you can speed run through the stages. Yup, that’s right. This stubborn reviewer is one of those gamer who will not back down from some stupid challenge he gives himself so he attempted to speed run all the stages. It lead to a lot of dying, and I mean a lot. Fortunately, the music is out of this world so I didn’t really mind dying and jamming out to the music on each level. The controls are very well done and easy to use. That is, so long as you use a game controller. Don’t use a keyboard and mouse unless you’re a masochist. Just saying. Or unless you like buying new keyboards.

Until I Have You is an enjoyable game with amazing music and retro graphics. I didn’t get too attached to any of the characters, nor did I particularly care about any of them. This is a game where you just want to play each level and attempt to do better every time. I treat it like Super Mario and just play through the stages. The voice acting is amazing except for those stupid pauses. The controls are top-notch except for some minor tweaks that are barely noticeable. And for the grand prize of it all, the soundtrack is free. In fact, I listened to it as I wrote this review. That seems to be a trend with me these days.

Until I Have You (Reviewed on Windows)

Until I Have You is really fun game with minor issues regarding the pace of its dialogue.

Until I Have You, James Spanos' New Game Announced

Until I Have You