Unto the End Review

Unto the End is an action 2D side-scroller with a simple, but effective, plot. You play a bearded old man who embarks on a hunt as your wife and child see you off handing you a weapon for protection. When things don’t go as planned and your previous path is no longer available, you must find a new way home trekking through layers of snow in intense blizzards and cramped, murky caverns deep in the mountains. Similar to many aspects of this game, the story is very minimal with no dialogue or other scenes. This is all the information you get, but it helps strengthen the treacherous journey knowing you have one single goal: to see your family again.

Combat is the main focus of Unto the End as the controls are far different than any other game from this genre, making them difficult to learn but quite satisfying to master. Instead of the typical hack-and-slash style we’ve seen in the past, Unto the End makes combat feel similar to a FromSoftware game where you have to learn your enemy’s movements so you can counter them correctly or you will fail. You move left and right with the left thumbstick while up and down are used for blocking high attacks and low attacks. With your sword, you also have a high attack and a low attack along with a duck which can be held for a roll, jump, shoulder check and throwing knife. Using all these actions is essential to succeeding in combat as different enemies require different actions. 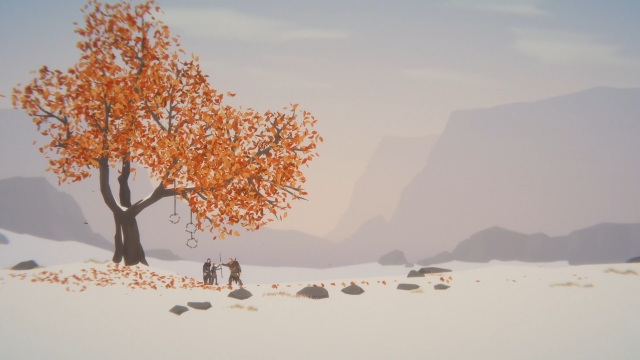 The enemies get tougher as you progress, requiring you to really focus on their attack cues to properly block or duck as you wait for your perfect chance to strike. They can also block your attacks whether high or low, but multiple hits will break their stance allowing you a hit or two. Unto the End wants you to play this game the way they intended by using your full arsenal, and while it can be tough to learn the controls, once it clicks, it’s superb. You can feel truly badass slowly walking into a battle then blocking/dodging all their attacks while getting in your perfect strikes as a true swordsman would.

With no HUD whatsoever, there are many aspects of the game you have to visually pay attention to or else you could lose some valuable items or even die. The biggest one being: you can lose your sword and throwing knife if you don’t pick them up. Some enemies have heavy attacks that can make you drop your sword, but you can also roll into enemies or rocks which can also cause you to drop it. If you don’t pick it up, as well as your throwing knife after throwing it, you may lose it forever. There is a warning about this at the beginning of the game, and honestly, it’s an awesome feature that can make this a unique journey for numerous people. 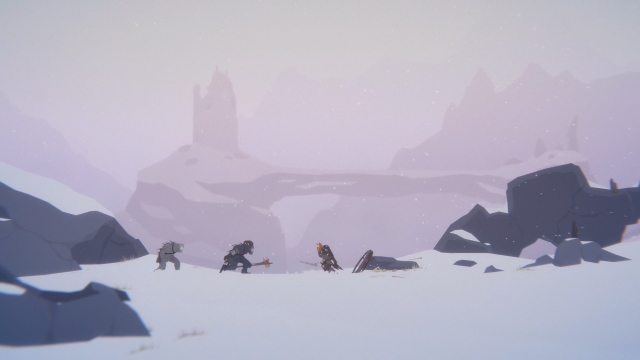 You’ll also have to look at your bearded old man to see if you’ve taken damage or not which is important to pay attention to since you can bleed out if you’re not careful. Damage is indicated with how much blood is running down your body, but it's difficult to catch it early which is key because you can slow down the process with herbs. Herbs can be found on corpses and in random places which aren’t ever indicated in the game; I just accidentally found them and knew to look for them afterwards. You can also find leather, bones and sticks in the same places as herbs which can be used to craft better armor at campfires. Campfires act as resting points where you can heal your wounds to completely stop the bleeding, practise your sword skills or use herbs to make a healing tonic, but there are very few around.

On your journey, you may notice that some enemies don’t attack at first, this is because you can offer them some of the supplies you find based on what you think they need. For example, I found an enemy who was bleeding out so I handed him a herb and he let me pass without trouble. You can give them the wrong item which will lead to them getting angry and attacking you anyway, so it’s a risk, but it can pay off if you are bleeding out and can’t fight. 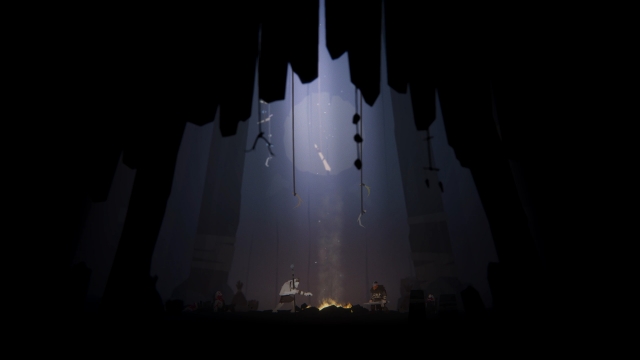 Visually, Unto the End is beautiful with its minimalistic art style that feels like a mix of Limbo and The Alto Collection that makes the slow trekking through the snow worth it. The animations for the combat are fantastic as well which are important for a game that requires you to study them to succeed. The only real issue is when you’re inside the dark, claustrophobic caverns within the mountains because it can be nearly impossible to see sometimes, despite having a torch at your disposal. There were multiple times I would fall into a hole and take damage or not know there was a ledge to climb because the foreground images were blocking it, which can get a little annoying.

Unto The End (Reviewed on Windows)

Unto the End is a scenic, lonely 2D side-scroller that sets its primary focus on a fixed number of intense battles with its unique combat system that is difficult to learn, but satisfying is master. There is no hand-holding here, though sometimes you might wish there was.