Valley is an atmospheric walking simulator in which players take control of a person in search of the Lifeseed, which is believed to be able to shatter worlds.

As the protagonist gets stranded on the Rocky Mountains, the player is capable of exploring the mysterious and mythological place called Valley, a vast land sprawling with tall trees, glowing orbs, and mysterious ghost-like creatures that inhabit the land.

Shortly after beginning the game and marvelling at the gorgeous lands, the protagonist finds a L.E.A.F. suit (Leap Effortlessly through Air Functionality), which they equip to be able to run extremely fast down slopes and jump incredibly high.

The L.E.A.F. suit is capable of manipulating "amrita", which is the life essence that creatures have within them. With this amrita, players are capable of taking away from trees and resurrecting dead things, such as deer or other trees. Additionally, when the player touches the water and dies, the L.E.A.F. suit resurrects them. This doesn't come without its price, however, as players will be taking the life force of the valley around them whenever they do perish. Although the graphics of the game are a bit dated in comparison to newer titles, it is undeniable that Valley's landscapes are nothing short of gorgeous. Being able to run through these to soundtracks very fitting for the atmosphere made for a fun experience. A great thing that the game has incorporated as well is the exploration aspect in which players can explore each of the areas to find several unique collectables to be able to complete the game and understand the entire story; things such as acorns, medallions, L.E.A.F. suit upgrades, and energy upgrades. Although these give a hint to Valley's story and help to enrich the experience, they aren't necessary to acquire in order to be able to understand the story, and I was very appreciative of that. Especially given how emotional the story is, however, I won't be touching too much on that to keep the review spoiler-free.

Valley's core gameplay mechanics involve running around the world as you explore for hidden collectibles and deeper story elements, appreciate the landscapes, and use the power of the L.E.A.F. suit to revive everything that is dead within the Valley. Throughout its early levels, the game is nothing short of relaxing and fun as it allows the player to just run around resurrecting things, which is therapeutic as you see the gorgeous trees blossoming back to life, or watching a dead deer wake up and run free once more. 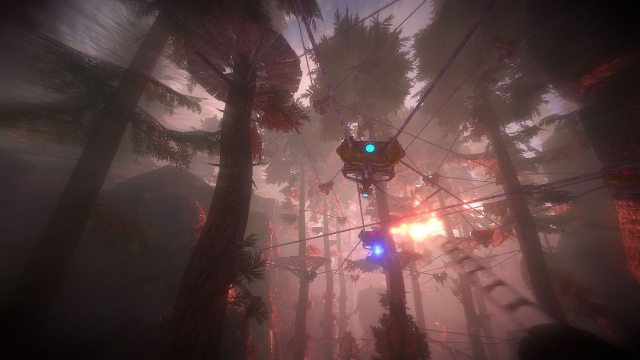 While running around, the game will give the player some platforming puzzles that involve gaining a lot of momentum to be able to jump wider gaps or explore the big worlds at quicker paces. These sections of running were some of my favourites because the music synergises perfectly with it, and it simulates so greatly how it would feel running through the world with the air breezing through at incredible speeds; the adrenaline-filled experience of running at maximum speed is something not replicated in any other game I've ever experienced before, and I was very appreciative of it.

Search for the Lifeseed and learn of a military research group that was sent to find the exact same thing, as you run around vast worlds and get told a sentimental tale about the lands, with beautiful music fit to adorn the gorgeous landscapes that make exploring all that much more fun.

Explore gorgeous lands, revive the dying valley, and discover a sentimental story while you run and jump through the vast worlds to find collectables to learn more about the lore that Valley has to offer.

Valley Out Now on PS4, Xbox One and PC - Launch Trailer