Vampire: The Masquerade has, until recently, been a criminally underused IP when it comes to videogames. 2004’s Bloodlines was a rough gem, full of expansive lore and deep, complex characters, all tied together with an engaging story and satisfying (if wonky) RPG mechanics. However, since then we’ve barely heard a peep from the White Wolf franchise, until the surprise announcement of Bloodlines 2 and now the release of Coteries Of New York. The latter is a short, standalone visual novel that takes place in the Vampire universe, and it should tide fans of the IP over until Bloodlines 2, even if it won’t blow anyone away in the process.

Being a visual novel, Coteries of New York (un)lives and dies by its story, and to a lesser extent its presentation. Thankfully, the game does look lovely, albeit rather static. The hand-drawn backgrounds and character portraits are beautifully detailed, however there is absolutely no animation to speak of, which even by visual novel standards is disappointing. For the most part the narrative and writing are of high quality, and all the intrigue, backstabbing, and political posturing of the Vampire universe is presented with flair and nuance. On a first playthrough, the story is incredibly immersive (if a little short) and the cast of characters players meet along the way are fleshed out, believable, and memorable. Players will definitely find themselves wanting to learn as much as possible about the world and its inhabitants while they carve out their own place in it. 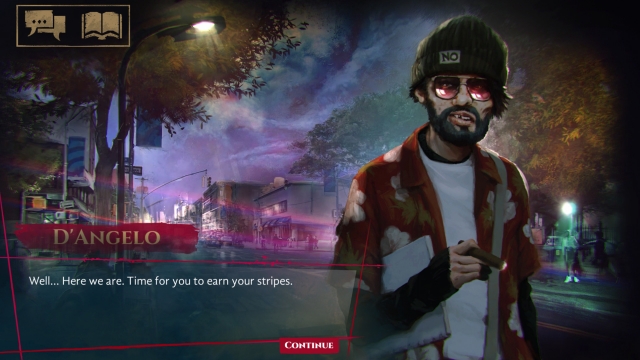 However, it’s on subsequent playthroughs that the cracks really start to show, and given that the game takes place over a fixed in-universe time period (20 nights), multiple playthroughs are mandatory if one wants to follow every subplot and meet every ancillary character on offer. Coteries of New York promises a branching story and plenty of opportunities to make choices (and experience their consequences), but the reality is much more linear than that. Major story beats play out the same way every time, with decisions leading to differences in surface level details as opposed to majorly affecting the narrative. This occurs even in spite of the fact that one can pick and choose the order in which they complete the various interactions that comprise the story.

Gameplay centers around typical visual novel mechanics, with a few interesting (but not particularly well executed) ideas thrown into the mix. For the most part, players will be interacting with other characters and choosing their responses in the form of dialogue or actions. However, the “rules” of the choice mechanics are wildly inconsistent. Some situations have a binary right/wrong outcome, while others are more nuanced and allow for multiple pathways through an interaction. It’s never possible however to determine what kind of interaction one is dealing with at the time, with that only becoming clear after it’s over. Further, some seemingly important decisions turn out to be meaningless, while other seemingly minor choices end up biting players in the arse (neck?) further down the track. Again, it’s impossible to tell in the moment which is which. 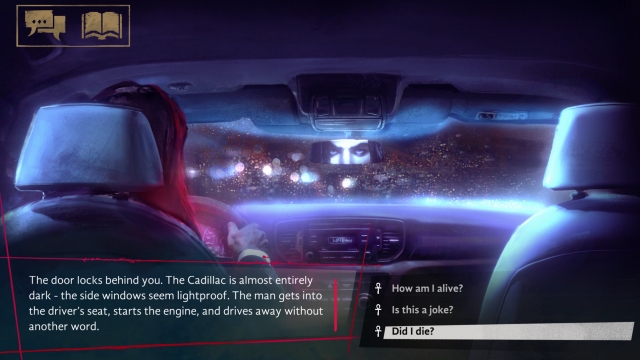 Coteries of New York tries to spice up the gameplay a little with some lore specific mechanics, in particular the need to feed on blood and the ability to use vampiric abilities known as disciplines. At the beginning of the game, players can pick one of three vampire clans to join, each of which have their own unique set of disciplines (e.g., Ventrue vampires can utilise Dominate, a form of mind control, to trick their victims into carrying out their objectives). Although this is a neat touch, in reality it merely leads to some changes in non-essential details, as opportunities to use abilities typically occur at the same specific moments regardless of clan choice. Feeding is required to stave off “the beast,'' the primal animal within that cares only for blood, and not for reason or humanity. While going hungry can lead to particular choices being cut off (or made available) there are ample opportunities to feed and so the tension this mechanic is designed to inject never manifests. In fact, players will need to intentionally go hungry if they wish to see how it affects dialogue.

Vampire: The Masquerade Coteries of New York is a fun little distraction that will at least satiate die hard fans’ needs for more content in the fictional universe until Bloodlines 2. It won’t however win anyone over who is unfamiliar with the source material or not a fan of visual novels. It’s still a better love story than Twilight though.

Vampire: The Masquerade - Coteries of New York (Reviewed on Windows)

If you absolutely can't wait until Bloodlines 2 for your next Vampire: The Masquerade fix, Coteries of New York is a decent enough way to fill the time.

Vampire: The Masquerade Will Get New Game On Switch and PC