Allow yourself to be transported to a time when street art was in its infancy. Murals and spray paint graffiti would soon boom across the urban scene in America and Europe during the latter half of the 20th century, whilst artists like Keith Haring and Futura gained attention from their public subway art. In Vandals, you’re put into the role of a graffiti artist as they navigate city streets and alleyways late at night, avoiding security guards and police cameras in order to find the right spot to make a mark on public buildings. 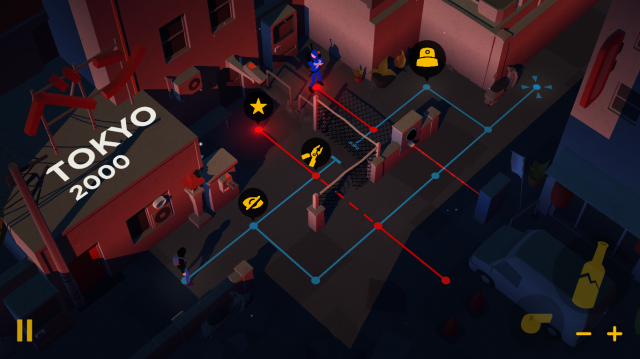 The game plays very similarly to Square Enix’s Hitman GO, in that you’ll be moving along tiles in a turn-based rhythm as enemies move to your actions. Some will be stationary and only leave their post if they hear sound, whereas others will move or turn on a certain pattern. As the levels increase so does the difficulty, as new hazards like guard dogs and security cameras are introduced. To combat this, there are several items in the stage that you can use as distractions. If you pick up a bottle it can be thrown elsewhere, which will cause guards to assemble on that position. You can also manipulate switches to trigger an alarm or open/close gates.

Once you reach the point where you can start graffitiing, you enter a minigame that allows you to draw your design to be sprayed onto the wall. This can be anything from symbols and letters, to objects and landmarks. There’s even a system in place for sharing your creations on social networks. Of course, this sometimes gives you the urge to scrawl profanity or rude images, but I also had as much fun slating other GameGrin staff. There are five hub areas consisting of cities like Paris, Berlin and New York, with each one containing twelve stages to play. Completing and collecting stars in each level will unlock additional stages, and you’ll be scored depending on the number of moves you make, if you were spotted, and if you managed to grab the bonus star. This adds new depth to the gameplay as it becomes all about making the right move, designing your technique down to perfection and pulling it off without a hitch. For a turn-based game it’s less about timing and more about foresight; knowing if a move you made at the beginning might help or hurt you towards the end. Speaking to Gamasutra last month, developer Théo Le Du Fuentes shed light on the design philosophy behind Vandals: “Even a puzzle game can be a stealth game, because you have to figure out how to get the perfect move and the perfect game. That's why we put the emphasis about being invisible. You cannot hurt anyone. You are very weak and if the police see you, they will start to chase you.” It felt refreshing to be able to play a stealth game that didn’t feature any violence, as it I could have fun by avoiding detection rather than defeating guards. For me, the satisfaction came in being able to trick guards and send them the wrong way. It was a welcome change from the norm of having enemies you can disable in one way or another.

With perfectly crafted levels and an awesome electronic soundtrack, Vandals proves to be a great entry into the turn-based stealth genre. In many ways, it captures the sensation of what painting at night feels like.