For its four years in development, Vane has mostly been shrouded in mystery, but when you’re aware that it was conceived by former members of Team Ico, it sets certain expectations. It starts with a great deal of promise too.

After a short prologue controlling a girl wandering a desolate stormy landscape carrying something to a tower before suddenly being swept away, the scene changes to a beautiful barren vista, and you’re flying above it as a black bird. It feels amazing, and with virtually no UI, it feels refreshing to be left to your own devices to explore this expansive world before you perhaps like Breath of the Wild. 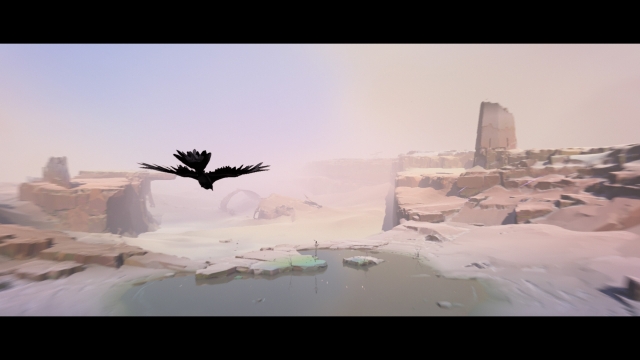 That feeling however lasts only about five minutes.

For as expansive as Vane may look, it’s really a puzzle adventure with very set goals that you need to progress in a prescribed order. But by setting it in such a vast environment rather than something more compact, it leaves you wandering around aimlessly, with only the subtlest of hints (or should I say, glints) of what you’re supposed to do.

For as majestic as it may feel to fly as a bird, your abilities are extremely limited and you soon realise that despite this freedom to traverse anywhere, you can’t do anything in your form. After one of the first puzzles, it transpires that the girl in the prologue and the bird are one and the same, but the ability to transform from one to the other is also heavily restricted. 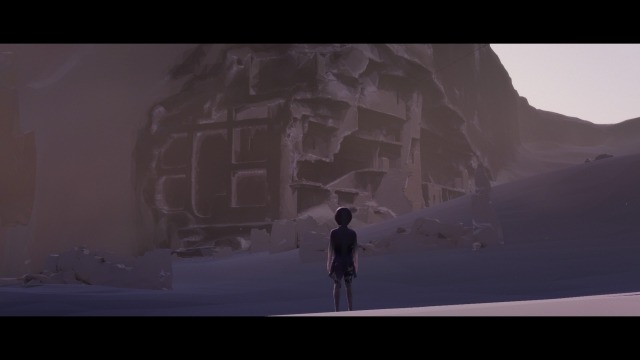 Sure, you ought to be figuring these things out for yourself, but one of Vane’s cardinal sins is that it’s wholly inconsistent on what you can or cannot interact with, and it’s not helped when you marvel at the intricate crags in the walls or caverns only to realise that they’re just there for show. Sometimes you’ll be able to pull yourself up a ledge that looked higher than expected but can’t do the same for another, sometimes you can’t even walk up to investigate something without an invisible obstacle in your way.

And then there’s the technical issues. A pain-in-the-arse camera, bugs that can make you stuck, forcing you to quit and restart the game (one case required redoing a whole series of puzzles), or the poor drops in framerate, even on a PS4 Pro. Most headache-inducing are the glitches and pop-in, which leads you to question which parts of the environment are accessible. It’s actually even worse when it becomes apparent that this is supposed to be part of the game design - though I’d love to hear an explanation on how falling through a level is supposed to happen.

Some of these issues can be patched and optimised later but it doesn’t help that even after getting past these struggles, the vagueness of the story means that by the time you’ve reached the twist and final revelations, it’s all just a bit underwhelming. I’m reminded by another disappointing adventure game Rime (incidentally also likened to Ico when first revealed) but that game at least building up to an emotional climax. In the end, Vane elicited no thoughts or feelings from me. Vane can still look visually striking when viewed from a distance while its audio design, with a brooding electronic score, can also be wonderfully atmospheric. Sadly, it’s not enough to salvage a wholly disappointing experience that never reaches the lofty heights it begins with.

It can still look visually striking when viewed from a distance while its audio design, with a brooding electronic score, can also be wonderfully atmospheric. Sadly, it’s not enough to salvage a wholly disappointing experience that never reaches the lofty heights it begins with. 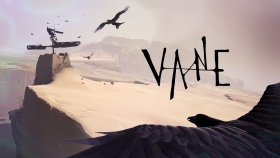