The two Vasara games are unique shoot ‘em ups (shmups) that have never been ported until now. Originally released by Visco Games in 2000 and 2001 in Japanese arcades, this is the first time the games have officially been released in the West. Set in feudal Japan, these quirky titles feature heroes taking on historical figures such as Oda Nobunaga whilst riding flying motorcycles and firing lasers… 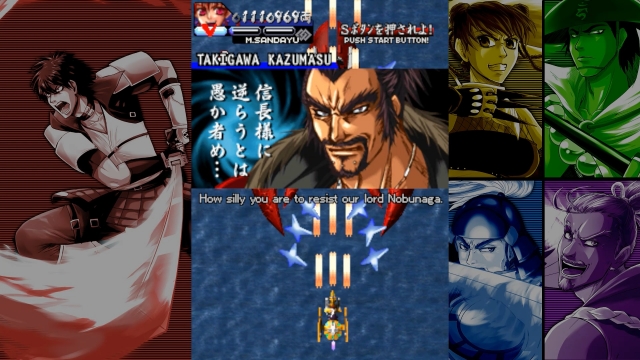 Let’s just say the story isn’t important and focus on the meat and potatoes of any shmup, the gameplay. Like most vertical shmups you fire at wave after wave of enemies before taking on large screen sized bosses whilst trying to dodge a variety of projectiles. It’s in the details though where both Vasara games make some interesting changes.

The games have an interesting melee mechanic where holding down the fire button will charge a melee attack that will swipe away regular bullets as well as deal damage. This allows you to save yourself from situations where you’d be pinned in and generally helps to get you out of sticky situations. The original Vasara also features a bomb button used for the usual screen clearing when in a panic, to deal damage or both.

Both titles also feature the titular Vasara attack which is powered by collecting crystals that drop from enemies and fill a bar beneath your score. This is functionally an extreme melee attack that lasts for a few seconds allowing you to deal massive damage. And this is where one of the changes made to the home ports is quite interesting. In the arcade, Vasara had an attack button along with a bomb button. Tapping the attack button fired your weapons and holding it charged the melee attack, but you would also use your melee attack to activate the Vasara technique if the bar was full.

This essentially meant you couldn’t use your melee for attack or to get out of trouble if you were saving your Vasara attack leading to some interesting decision making. In this release however the Vasara attack can now be set on a separate button meaning you are free to melee without using up your precious Vasara bar. This technically makes the game easier than the original and is a nice quality of life change, which also makes it play more like the second game whose characters had multiple Vasara charges that already used a separate button. 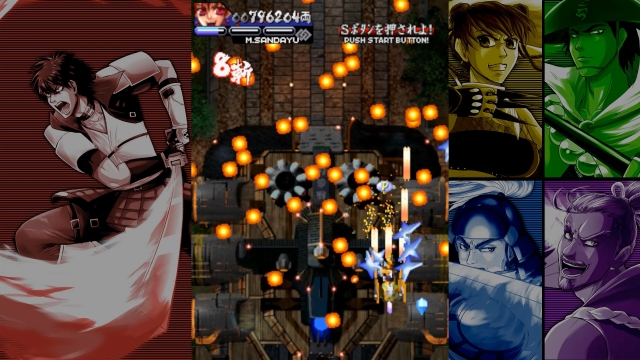 Other than this change the ports are faithful and the collection has a selection of options to tweak. On the visual side you can toggle artwork on either side of the game screen as well as toggle a simple smoothing filter if sharp pixels aren’t your thing. Sadly there are no options for a CRT filter or even simple scanlines, which is a shame, but won’t be an issue for those that like the naked pixel look. It also supports Tate mode (where it will show the game rotated 90 degrees) for those who want the true arcade experience and have swivel monitors.

Back to what the games themselves are like; both games have a selection of characters to choose from, three in Vasara and four in Vasara 2 (with a fifth unlockable upon completion). Each character has a unique shot and melee attack along with basic stat differences in power and speed. This gives each character a distinct feel with their melee attacks especially changing up how aggressive or defensively you play. 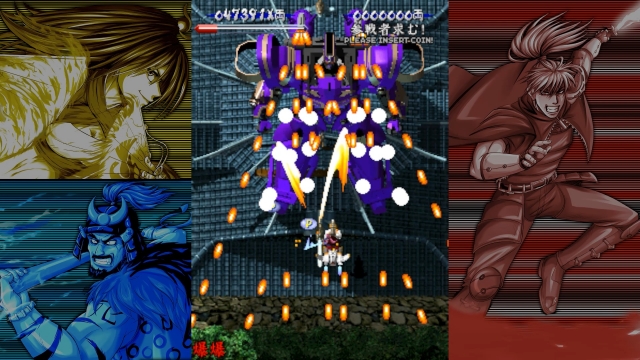 As mentioned Vasara has bombs and a single charge Vasara attack that charges quite slowly as you collect gems from fallen enemies. Vasara 2 got rid of the traditional bomb mechanic and instead has three Vasara charges. These charge a lot quicker essentially making them into rechargeable bombs.

The games also feature something not often seen, in that enemies generally don’t kill you on impact, simply nudging you out of the way (or more likely bouncing you into a bullet you’d otherwise dodged). All enemies from regular foes to bosses have a fantastically tactile feel to them because of this, and being bumped about actually adds to the uniqueness of the game.

Both games are on the harder scale of things when it comes to shmups. They sit somewhere between a traditional shmup and a bullet hell and whilst the melee mechanic makes some of the gunfire a bit less intimidating it definitely takes some getting used to. But that is also part of the Vasara title’s charm: quirky and interesting mechanics in a futuristic, feudal Japan setting with giant mechs in traditional armour. 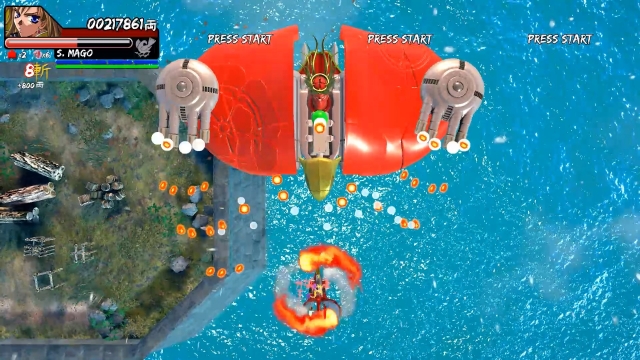 As an added extra the collection also includes a Timeless mode. this is a 3D recreation of the games assets and overall feel with support for 4 player simultaneous play in 16:9 widescreen. It’s a procedurally generated affair which sees you playing as long as you can and there isn’t much to it. It’s kind of odd seeing them go to all this effort recreating all the assets in 3D (although they do have a “budget” look to them) but then only using them here. It feels a bit slapdash but as a bonus extra it’s fun to have and I can see it being a lot of fun to mess around with locally with friends.

It would have been nice to see them use these in 3D remakes of the main games as a bonus instead, but perhaps it paves the way for more Vasara in the future. All in all these ports are solid and it is nice to see these games brought to modern systems so they can be experienced by more people.

Vasara Collection brings two rare Japanese shmups to a modern audience in a competent (if relatively no frills) experience. Unique melee mechanics and a quirky feudal Japan setting make them well worth experiencing, just don’t expect them to be easy. The bonus Timeless mode is a nice addition but feels a bit wasted.