I, for one, am always ready for a good evil house story. Haunting of Hill House, House of Leaves—you name it, I’m there for it. There’s just something about the idea of a sentient house that’s always appealed to me. Not necessarily in a good way, but in the same way as reading about UFO sightings or Bigfoot encounters. I’ve always been fond of the idea of things that exist in the shadows and back-roads of human civilization. Unsurprisingly, then, Neil Gaiman is one of my favorite authors.

Wayward Manor is, if you haven’t guessed, a story about a house, one of “fine New England stock” as the eponymous Wayward Manor itself explains, voiced by Neil Gaiman, who also wrote the game in partnership with the studio The Odd Gentlemen. Taking on the role of a spirit, players team up with the Manor to drive out its current unsavory residents: the Budds family and their live-in servants. Frustrated by his lack of hands (or any sort of moveable appendages) the Wayward Manor cajoles the player into moving objects and playing on the Budds’ worst fears in order to drive them out and reclaim the key to the Manor. 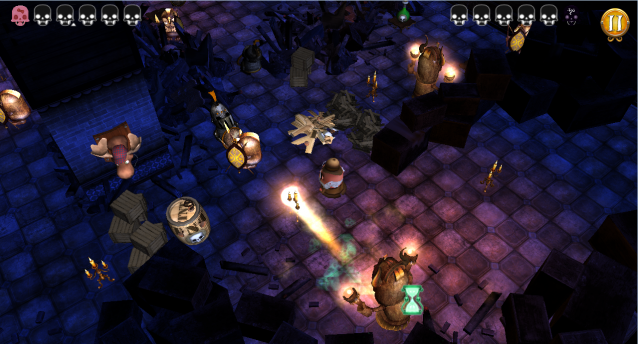 Players can smash bottles, poison candy, maneuver tiki statues and generally do whatever it takes to chase out whoever they’re up against, all the while uncovering the story of the Wayward Manor and its mysterious butler Mr. Toombs. Wayward Manor’s gameplay is point-and-click puzzles that are at times a tad simplistic, but levels are open-ended enough to offer quite a bit of replay value. With the exception of perhaps the very last level, players can choose any number of methods to scare the Budds and earn trophies.

Wayward Manor is broken up into five chapters, each with a focus on a different group of residents, and moves through the story in a linear fashion with the chance to go back and play previous levels. With a narrated intro and outro, each chapter progresses the story of the Wayward Manor, its ghostly accomplice and the Budd family—whose crimes against architecture range from tastelessness to explosions and inferior cleaning. Wayward Manor is a ghost story with humour in line with Gaiman’s usual style, and the sort of game that is enjoyable no matter the player’s age. 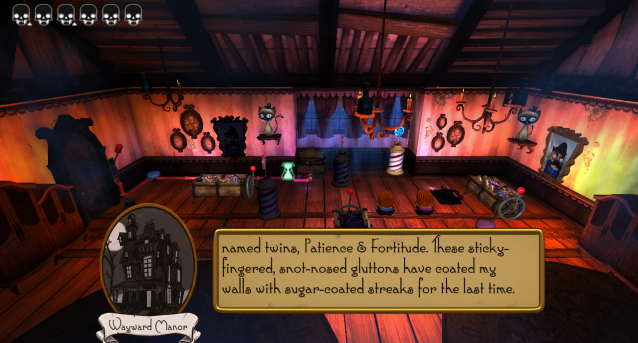 The game’s main draw for players is likely to be its storytelling. Gaiman is a critically-acclaimed author who’s also had experience in film and comics, and his work with The Odd Gentlemen gives Wayward Manor its own unique aesthetic: things like a cliché horror theme played on a toy piano, doo-wop singing skulls, and the Budds’ eclectic furniture collection. While Wayward Manor is suited for a younger (or at least more whimsical) crowd, it doesn’t lose any appeal for an older audience.

However, the gameplay can at times be repetitive, and while at about six hours long it’s possible to do the game in a single sitting (albeit a long one), I found that I preferred to play in chapter-size chunks. For most puzzles, it can be easy to power through them by repeating the same or similar actions, and the gameplay probably won’t be a challenge for die-hard puzzle fans or even amateurs. That said, most players won’t be planning to do a speedrun, and the open-ended gameplay does shine through if you let it. 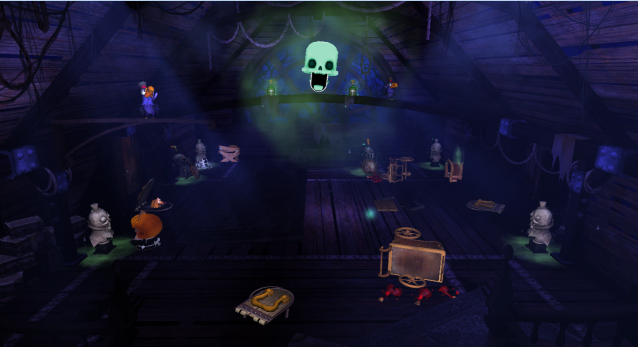 Perhaps my biggest grievance, though, lies with the game’s narration at the beginning and end of each chapter. Despite being the main source of story progression, the developers somehow neglected to give an option for subtitles, which I generally prefer to have on for the sake of my short attention span. There was also no one way to change the music volume (which at times drowned out the narration) without also lowering the volume of the voice-over. Otherwise, I enjoyed the game’s soundtrack quite a bit. It added to Wayward Manor’s quirky feel without becoming annoying or repetitive; admittedly, I was more than a little delighted by the singing skulls and I’m perhaps biased in that respect.

Ultimately, Wayward Manor was a fun game with a great story and, most importantly, something I wouldn’t have minded dropping $10 on Steam for. The game is short, but has some solid replay value and is good for a quick break. The game has Gaiman’s signature storytelling style and the puzzles are open-ended enough for multiple run-throughs.

Ultimately, Wayward Manor was a fun game with a great story and, most importantly, something I wouldn’t have minded dropping $10 on Steam for. The game is short, but has some solid replay value and is good for a quick break. The game has Gaiman’s signature storytelling style and the puzzles are open-ended enough for multiple run-throughs.