Just a note before we start, I would just like to say that I was very disappointed with the fact that you have to use two Wii remotes instead of one remote and a nunchuck. The wire for the nunchuck is too short as you are waving your hands about in two totally different directions. You can use one remote; however it is not nearly as effective compared to using two. Your arms tend to tire easily, and it's quite disorientating when your character on the screen moves both arms, yet the trace line only tells you to move your right hand. In my opinion, if you only have one Wii controller, then it's not going to be a fun game to play.

To play the game, you use both Wii remotes as pompoms, and you have to follow the trace lines, indicated on the screen, which signify which direction you swing the remotes in. When you are using two remotes, the red trace line indicates that it is the right hand you have to swing with, and the blue trace line shows that you need to use your left hand. It can sometimes be because some people (not mentioning my mum's name) can easily get confused from the left hand and the right hand actions.

To know when to actually swing your arms is a timing star. The star begins to sparkle and moves along the trace line, showing when and which direction to wave your arms around. While you are cheerleading, depending on how well you time your swings, you have a results screen displaying how well you did on that song. If you time your swing perfectly, then on the results screen you get a message saying "Cool", but if you did not time it well, then it will say something along the lines of "A little faster" or "A little slower", "A little bit harder" or "Not that way!". The score you get is through how many points you receive during the cheer, the points you get are based on how well you timed your motions.

If you have a series of correct moves, then you get a combo and if you score a combo you gain more points, as well as bonus ones which increase your combo. In the certain part of a song, you may get a rainbow-like trace line. This is a 'Bonus Chance' and if you successfully hit all the moves with the rainbow-coloured lines, you will enter 'Bonus Area', where you shake the Wii remotes rapidly with the trace line, the more you shake the remotes, the more points you get. Along with the other on-screen indicators, there is a megaphone which is only used in Championships, this shows you how ‘pumped-up' the crowd is. You have to fill up the megaphone to clear the certain stage you are on.

In the game there are many songs ranging from: Erasure - ‘Star', to Paramore - ‘Born for This' and EMF - ‘Unbelievable', to Hilary Duff - ‘Come Clean'. There are also various stages to choose from, all across the United States of America. You can unlock more stages as you progress through the game.

When you start the game, I was very happy to see that you can have up to four different profiles because what annoys me most, more than games that are just naff, is a game that you can't have different profiles for! Anyway, once you choose your profile, obviously you put in your name so you know which your profile is,  you then choose which cheerleader you want to be out of five different ones. The game begins a tutorial, basically showing you some of the basic and skillful moves, as well as telling you about the on-screen indicators and getting you into tone with the beat - not necessarily in that order. You can go back to the tutorial anytime you wish during your progress throughout the game. Once the tutorial is complete, it takes you to the title screen which gives you the options of Championships, Cheer Off, Workout, Dressing Room, Squad Makeover, Practise (which is the tutorial) and  there is a back option on top of having ‘Options' anyway.

When you first enter Championship mode, you have the choice of either playing with up to two Wii remotes on your own, or play with a friend with two remotes (one for each person). What Championship mode, is you touring around the USA meeting new people and cheerleading. When you, for the first time, enter a certain stage, you meet new characters, who are your rivals as you will be cheering with them on the same stage. If you clear that stage, then your rival cheerleader becomes part of your squad, and she becomes a selectable squad member in certain parts of the game, such as when you are on Cheer Off mode. Once your rival joins your squad, her uniform that she is wearing will be selectable when you come to creating a new outfit for your squad. When you clear a stage, not only do you sometimes have a new squad member, but you can earn new uniforms or an item of some sort. As well as these rewards, you can unlock new stages to perform later on in the game, once you have cleared a stage.

Cheer Off mode is a multi-player for you and your friends to play with. When you select this mode, you get to choose either playing with one friend and using four controllers two for each person, or you can cheer with up to four players, using one controller each in their right hand. Once you have selected your mode then each player gets to choose which character they want to be out of the available cheerleader. Choosing a stage and a song is exactly the same and the only thing that is different is that when you clear a stage, you do not get anything for it.

On Workout mode you have to help out these impossibly fat people who have simply ‘forgotten' how to exercise. You can choose whether to have an extended or quick workout. The longer the workout is, the more intense it becomes. It scores you on how many calories your student looses and depending on how well you time you motions, the more points you get, the more weight your student looses. When you do manage to succeed in making them fit again, because during the course of the workout, you student magically looses weight in a few minutes (my mum quoted "I wish that could happen in real life"), then he or she (I can't tell which it is half the time) gives you a gift, whether it is an item or a uniform. When you have finished with a student, you get a new, different student, and the tempo of the workout gets faster. It is very challenging and can exhaust you out quickly, in this particular mode, however it is a lot of fun and can make you want to do it over and over again.

On the whole, I think that this game is reasonably good, however bad it may sound. ‘We Cheer' is a pleasurable and addictive game. Nonetheless, it can drain the life out of you and can get rather frustrating when you do not clear the stage or get a certain move right. I would recommend this game to everyone above the age of ten with a good back. The only thing missing are pompoms to attach to the Wii controllers!

We Cheer (Reviewed on Nintendo Wii)

On the whole, I think that this game is reasonably good, however bad it may sound. ‘We Cheer' is a pleasurable and addictive game. Nonetheless, it can drain the life out of you and can get rather frustrating when you do not clear the stage or get a certain move right. I would recommend this game to everyone above the age of ten with a good back. The only thing missing are pompoms to attach to the Wii controllers!

Hope you have the original first paragraph somewhere safe Jess ;) 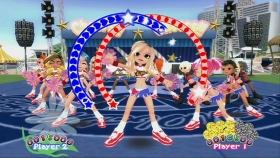