For what is a relatively small genre, there are a good number of well made 2D stealth games, such as Mark of the Ninja and Gunpoint. These types of games do not release often, but they’re fun, even for people like me who usually avoid other stealth-based releases. Wildfire’s eye-catching sprite art and magical abilities certainly made the game stand out, and it seemed like this would be another solid title. But, despite some strong moments, the game ends up being a confused, clunky experience.

As context to your elemental adventures, Wildfire starts with the protagonist being burned at the stake alongside their destroyed village. Luckily for them, they recently found a meteor that crash landed nearby, gaining otherworldly powers in the process. Controlling the fire that nearly killed them, our hero uses their new abilities to take revenge on the kingdom that ordered the village’s destruction. Wildfire’s narrative is brief and doesn’t go much further beyond a standard revenge plot. The villains are comically evil, leading to an ending that lacks any impact. 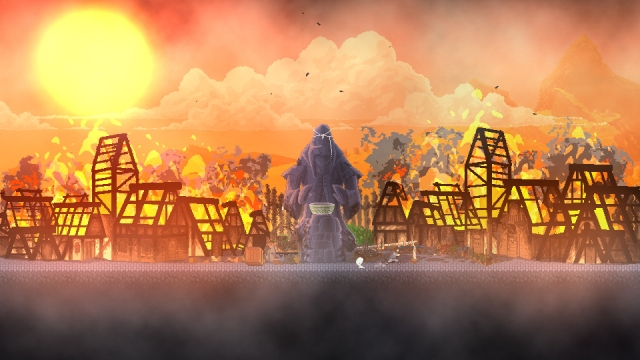 It’s clear that the main focus is on gameplay, where you can put the main character’s powers into practice. Your initial moveset is quite basic, letting you run around and perform simple actions like grabbing ledges or sliding through gaps. Jumping does feel a little strange, due to how heavy you are. The main character is nowhere near as agile as a typical platforming game protagonist, so you can’t clear huge gaps easily.

The more interesting moves come from the elemental powers that are unlocked throughout the story. Fire is the first element, giving you the ability to burn bushes and vines to scare enemies. The flame effect is satisfying, but you’re often better off not burning things at all. This is due to how the AI works in Wildfire. Quite frankly, the soldiers are idiots, running off cliffs and into spikes once even the smallest fire has started. Once everything is safe, they just resume walking back and forth along the same area like a robot.

Simplistic enemy behaviour is not exactly new to the genre, since smarter opponents can often lead to a lot of trial and error as you try to figure out each level. But the way enemies react to fire in particular feels counterintuitive to the stealth focus. They’ll flee to places that aren’t normally patrolled, or die causing you to fail the bonus objectives. Later levels often make it hard to get much use out of fire, which is strange considering the game’s name. 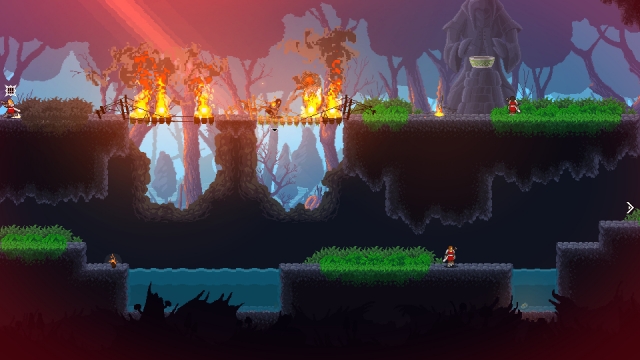 Water and earth, the other two elements you gain access to, are much more appropriate for sneaking past enemies. Water’s main use is to create bubbles that you can float in to reach higher areas. Meanwhile, Earth has vines, a versatile movement tool that opens up new methods of traversing levels.

Of the three elements, earth is the most consistently useful, especially when you factor in the different unlocks that are available. In many levels there is a shrine, and throwing an element into it will give you an upgrade point. Some, like the fire double jump and earth vine traps, are well thought out abilities that compliment your initial arsenal. Others, such as the optional water abilities, are too situational to be worthwhile 99% of the time.

These unlocks do make the game more fun, and it turns fire from a liability most of the time into a useful tool for stealth. Other unlocks open up pathways that weren’t previously available, helping you complete the many optional objectives. The problem is that getting the upgrade points needed can be grindy, requiring multiple playthroughs depending on the elemental points you got. Wildfire would benefit from giving the player a wider array of tools to play with from the start, rather than locking the more interesting ones until later. 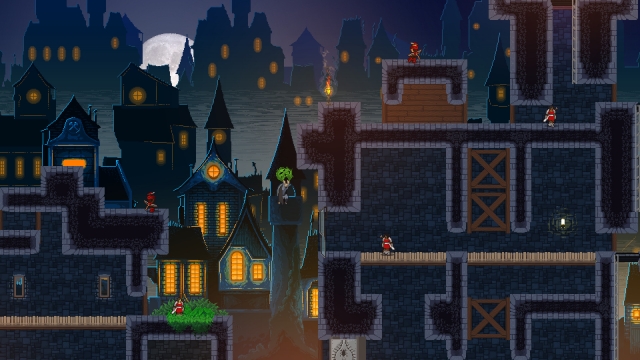 Despite some quirks with the controls — and the fact that actually causing wildfires is a bad strategy when trying to be stealthy — the game’s worst aspect is actually the level design. Smaller, more focused levels, offer some freedom to complete objectives without being tedious to finish. It’s the larger levels later on that bring the most issues. Some make certain elements useless, and others are just too long for their own good. Escort missions don’t help things either, with the villagers you have to rescue being as stupid as the soldiers.

There are levels where everything works together to create some interesting challenges, though these are not frequent enough to make Wildfire stand out from the crowd.