I’ll preface this review by saying that before playing Windforge my experience with the 2D sandbox genre consisted of a whopping 37 minutes stumbling around in Terraria, not really understanding the point of the game. However, having spent around 10 hours with Windforge, I can say that I now certainly understand the appeal of the genre, even if this RPG-infused title is lacking in many departments.

The events of Windforge take place in Cordeus, a steampunk-inspired world where clusters of land float in the sky, and whale oil is the primary source of fuel - think Dishonored crossed with Skyward Sword. However, the supply of whale oil is running thin and a new energy source needs to be found in order for the population to survive. There are legends of a previous civilisation which thrived using a different energy source, but investigation into the people, known as Aetherkin, is forbidden by law and taboo. As the player, it's your job to seek out a new energy source and save the people of Cordeus. 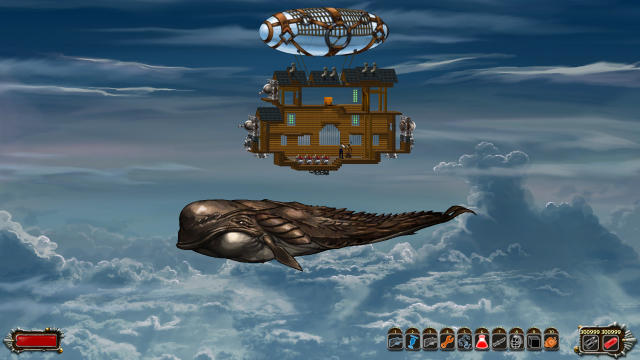 The game opens with a character creation screen which allows the player to make their hero and choose one of the four classes - butcher, sailor, prospector or merchant. Each of the classes offers a boost to one of the player’s stats such as strength, vitality, agility and wisdom. I opted for the light-footed prospector, but indecisive players needn’t worry as you can improve your other stats by paying trainers in towns.

After you’ve made your character, you’re dropped into a floating ship (more on those later) and told to find an artefact in a nearby temple. This brief sequence acts as the game’s tutorial and introduces you to the mining, combat and platforming mechanics. Unfortunately, it also presents the primary loop of Windforge: navigate a maze-like temple; kill mindless enemies and overpowered bosses; collect an artefact; escape; repeat. It makes for a pretty monotonous experience, which is certainly not helped by the idiotic AI that alternates between standing still while you shoot them and running back and forth while shooting frantically. At least the platforming is kept interesting by the grappling hook, which is always satisfying when used correctly. 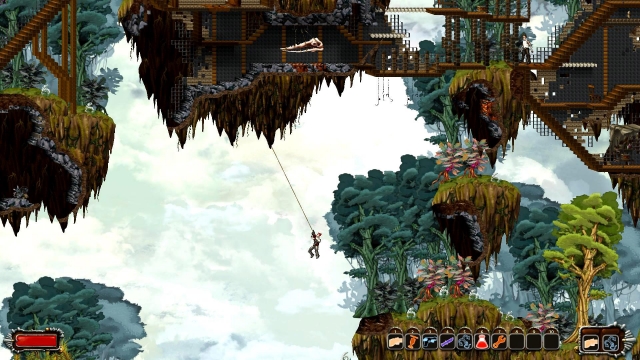 As mentioned earlier, the game features many RPG elements such as quests, towns, and levelling up. In typical RPG fashion, some of the game’s quests boil down to ‘fetch item x, bring it to y’. These types of missions aren’t fun at the best of times, but in Windforge they can become outright infuriating. After fetching the required object to complete the mission, heading to the right NPC in order to complete the quest becomes a challenge of its own. You see, the world map is made out of square chunks, each separated by a loading screen. The game includes an objective marker system, but it only points you towards the square you need to go to. This becomes extremely frustrating when a quest simply tells you to talk to a character with no description, in a large, labyrinthine town.

To travel around the world, you’ll use your custom airship. This is the area in which Windforge seems to try to differentiate itself from other games in the genre, but for the most part the mechanic is underwhelming. The game’s trailers and screenshots paint the air combat out to be an exciting and important part of the gameplay, but in reality there’s no point in it. You’ll come across many AI-controlled aircrafts while you’re exploring the sky, and for the first few encounters I chose to fight back (they always shoot you on sight), either targeting their ship’s weak points with my gun turrets, or jumping aboard their ship and taking them down at close quarters. However, I soon realised there’s no reward in doing so; I hoped that I would at least be able to salvage some of their ship’s parts and use them to upgrade my own, but you’ll be lucky to find as much as some ammo from your fallen foes’ corpses. 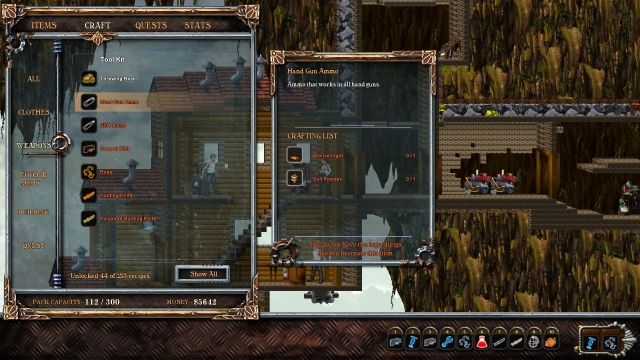 Despite the sandbox nature of the game, I spent very little time actually building anything. Perhaps that’s due to my lack of creativity or experience in the genre, or it could be the fact that the game has a slight 2.5D look that makes precise mining and building a lot more difficult than the traditional pixel art approach of Terraria. Don’t get me wrong, it’s not impossible, just enough of a nuisance that, combined with the fact that I only used it for transportation between areas, I never saw the need to upgrade my ship. The main source of enjoyment for me was just the RPG-esque grinding through temples and upgrading my character to become a badass.

The thing which it is sorely missing is multiplayer; throughout the game I couldn’t help but think how much more fun it would be with a friend to bring on temple raids, compare ships with and battle against. A brief look at Windforge’s Kickstarter page told me that the project didn’t make enough money to reach their multiplayer stretch goal, which is a shame, because without it the game just doesn’t feel complete. 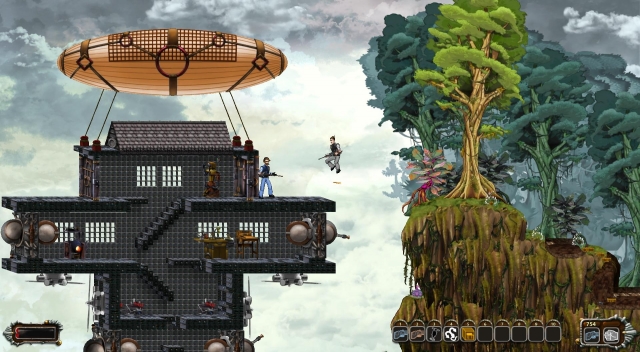 I have mixed feelings about Windforge’s story; on the one hand it’s commendable that Snowed In Studios have chosen to implement one into a genre that makes it easy to simply drop the player in without context, and I am partial to the steampunk theme. On the other hand, the story is told quite boringly through text and still images, and there are no memorable characters to speak of. The game is pretty bland graphically, too, and there’s not much variety to the environments on offer. The audio doesn’t fare much better either, with barely noticeable music loops that are repeated ad nauseum.

Windforge is the shadow of the game that it should have been. There’s plenty of systems here that should be great, but the package doesn’t quite come together - primarily due to a lack of multiplayer, but also due to a number of design issues. Those who prefer their sandbox games as a solo experience will likely be thrilled with the RPG elements, while others should probably steer their airship clear of Windforge.

Windforge is the shadow of the game that it should have been. There’s plenty of systems here that should be great, but the package doesn’t quite come together - primarily due to a lack of multiplayer, but also due to a number of design issues. Those who prefer their sandbox games as a solo experience will likely be thrilled with the RPG elements, while others should probably steer their airship clear of Windforge.