Diggs Nightcrawler is the second title to come to PlayStation 3 that allows the use of the Wonderbook. It's a 'game' filled with fairy tales, guns and puns and mainly aimed at the kids. I say 'game' because it's not so much a game as an interactive story, but that's sort of the point of the Wonderbook.

You start your tale in Diggs' office, situated in the heart of Library City: a place filled with books, folklore and fairy tale heroes such as The Itsy Bitsy Spider, Little Bo Peep and Mother Hen. Diggs is a suave-talking, smooth-walking (well, crawling) private investigator, the likes of whom match up to the classic noir characters of the same profession. There's been a disturbance in this quiet old town - Humpty Dumpty had sat on a wall and in turn, had a great fall. However, it becomes apparent early on that dear Humpty didn't fall but was pushed! Thus starts a quaint, and sometimes dark, tale about Diggs Nightcrawler and his adventure to find out what exactly happened to Humpty Dumpty. 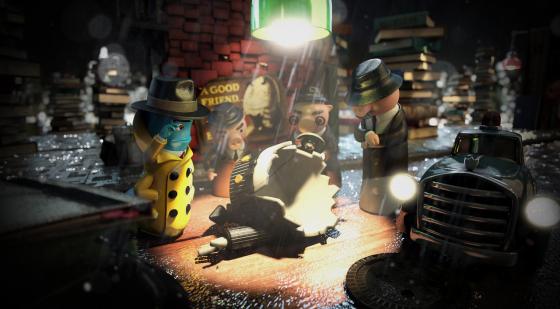 Being a Wonderbook game, as you might expect, you will require a PlayStation Move camera and Wonderbook peripheral. You place the book down in front of you and using augmented reality technology, the scenes are played out on your TV, in the book. You then interact with the game by manipulating the physical book which adds a whole new layer of immersion to this interactive story.

You can tilt, rotate, shake, wave and turn the pages of the Wonderbook to interact with it, each of which you will be prompted to do by both Diggs and an onscreen alert. I was quite impressed how well this worked as, having played Book of Spells, I could see how it would not. In Book of Spells, if you moved the book out of place, it just went up in a poof of smoke and then reappeared. In Diggs Nightcrawler, if you move the book, the scene interacts with it.

An example of this would be when there's a key stuck in a tree and you're asked to assist with retrieving it. To do so, you would tilt the book to the right, moving the entire right hand of the scene and the key would fall off the branch. Before actually playing with the book, I thought it a very novel idea but when I physically used it, it was a whole different story. It was a new way of interacting with a game and one that broke the fourth wall as Diggs told you what to do. 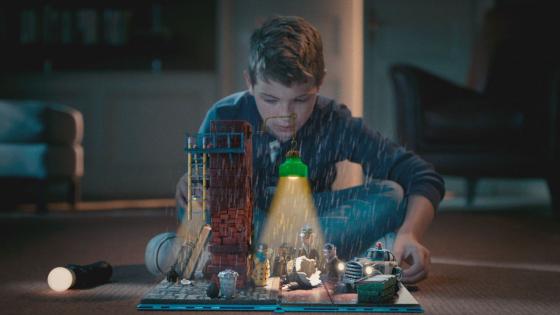 With this being said though, Diggs Nightcrawler is primarily a younger person's game and I didn't quite like being called a “kid” constantly. It was like, somehow, they knew that I shouldn't be playing this and all of the characters were judging me and deciding to remind me just ridiculous I looked, sitting on my bed wearing boxer shorts, eating Wotsits and reading a children's book. Well, you know what, screw you fairy tales, I can do what I like, I'm an adult.

Speaking of being an adult, whilst the dialogue in this game is mainly aimed at children for obvious reasons, there are, like any good children's entertainment, bits in there to appeal to the adult sitting, bored out of their mind, next to their child. This is a definite plus point for me (being both the child and the adult).

Diggs Nightcrawler is, as mentioned, an interactive story. This means that the majority of the playtime is filled with story and interaction between the characters. This would usually mean that the player would sit back, relax and enjoy the quips and puns flying around but not in this story. Oh no, you can move the Wonderbook around whilst the scenes are taking place, taking in all the details from every angle. This is how I spent the majority of the dialogue - admiring the scenery. It was unusual at first to be able to rotate a book around and see it from different angles but I soon got used to it and it's a feature that I really enjoyed about game. 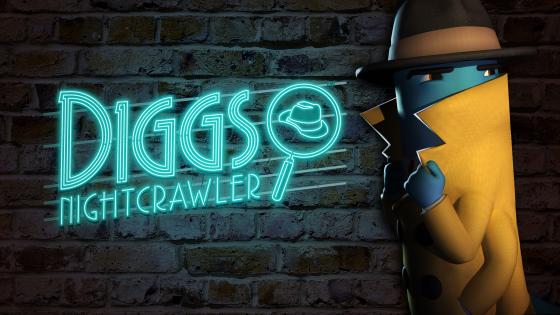 One thing that I didn't really like about this though was that the camera pans in and around the scene. This would be fine but the shot digitally zooms into the book being picked up from the camera. Whilst the actual scene being played out looks lovely, crisp and cartoony, my now ginormous, pixelated hand was a bit distracting. That's the problem with digital zoom, it just pixelates everything.

You can increase the replayability of scenes by going back after completing a chapter and using the Move controller to take pictures and video footage of the scenes from different angles. However, this is the only time that you really use the Move controller whilst playing Diggs Nightcrawler and I found this quite disappointing. Whilst the tilting and rotating puzzles were fun, and you did get to use the Move's built-in microphone occasionally, I think that they could have been heightened by the use of the motion controller. I suppose, in some aspects, picking up a peripheral could detract from the immersion of a magical book that allows you to interact with it but I still firmly believe it could have been used in a better way than a camera.

Diggs Nightcrawler is a fairly short game, spanning just over two and a half hours through three chapters but, with this said, a child's attention span is somewhat short so this does make sense. Taking into account that I am an adult gamer playing a children's game, an addition of an extra playthrough for the Move controller to be used as a camera and a mechanic which doesn't let you lose at all, you're looking at around five to six hours of gameplay which is pretty decent. Overall, Diggs Nightcrawler is a funny and quirky title with interesting characters and dialogue for the parents and pretty pictures and sounds for the children. It's an entertaining addition to the slowly increasing Wonderbook series and makes great use of the peripheral. I would have liked to see the PlayStation Move controller play a bit more of a part in it but you can't have everything. If you're looking to dust off your Wonderbook and put it to use, this is a great little page turner.

Diggs Nightcrawler is the second title to come to PlayStation 3 that allows the use of the Wonderbook. It's a 'game' filled with fairy tales, guns and puns and mainly aimed at the kids. I say 'game' because it's not so much a game as an interactive story, but that's sort of the point of the Wonderbook.