For the last 25 years, the Worms franchise has been known for its artillery tactical battle games with armies of fully armed earthworms at war. It required strategising to be able to take out the enemy forces, scattered around the levels featuring a totally destructible landscape. Fast forward a quarter of a century to 2020 and Team 17 is still working on new games for the Worms series. The latest title, Worms Rumble, is not the Worms game you remember. There is no more tunnelling, barricading your worms with girders, air strikes or totally destructible environments. Worms Rumble is a chaotic, real-time, 2D, run-and-gun platformer, with the familiar art style you know from the franchise. Worms Rumble is a cross-platform multiplayer game, featuring three different modes; deathmatch, last squad standing, and last worm standing that can handle up to 32 players playing together. There are recommendations for what level your worm should be before trying the other modes besides deathmatch, but it doesn’t take long to get to level five or ten. These can be played with your friends, or just online with other players. There is an optional tutorial level showing you how to traverse the level; knock out obstacles blocking your path with weapons like the baseball bat and shooting targets. There is also a weekly challenge called The Lab that you can play to unlock customisations for your worm. 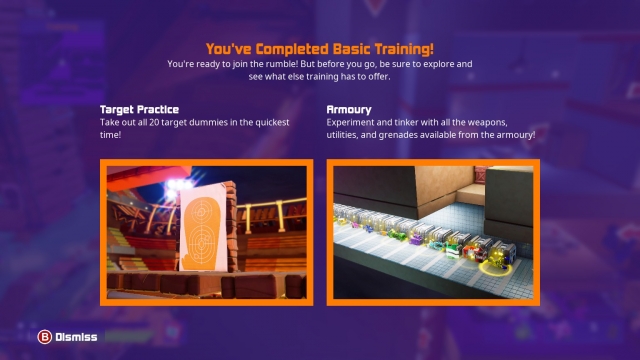 While playing, one of the main differences I noticed is the lack of an inventory screen, where you get to choose what weapon you want to do battle with. Instead, the weapons are scattered around the level and you pick up and switch the weapon you are currently holding. To be fair I haven’t played a Worms game since the Nintendo DS and Worms W.M.D so the weapon inventory system may have changed in the other titles, but it’s something I noticed here. It does make sense that they don’t use this system here though: the gameplay is a lot more fast-paced and you don’t have time to choose which weapons you want to use. If you did, your worm would constantly be getting killed. It is interesting to see that the weapons that you do use in battle, will also level up along with you. 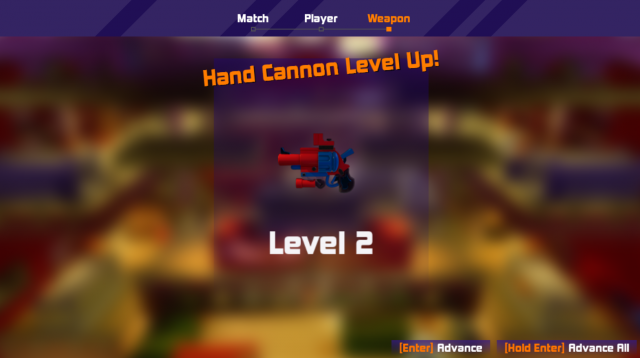 If you do happen to get killed while playing, which will happen a lot, you can respawn and continue to battle or just spectate. There doesn’t seem to be a cap on the amount of times you can respawn, so you can constantly come back to fight. There are three different arenas to do battle on, Missile Mall, Portal Park and Transforming Towers. Though none of the environments are destructible. Gone are the days of tunneling and burrowing into the ground to stay away from your opponent. Instead, you are running around an arena full of platforms, elevators, rooftops, shafts and open rooms. Sometimes there will be a counter or box to hide behind for cover but most of the time I would just try to get into an elevator or make an escape wall jumping to get up to a higher level or jumping down to a lower one. If I was still alive that is: it doesn’t seem to take more than a few seconds to die unless you have armour to protect you. There are med-kits and energy drinks spread out in the level to help get you up to peak health to keep you in peak performance to take out the enemy. 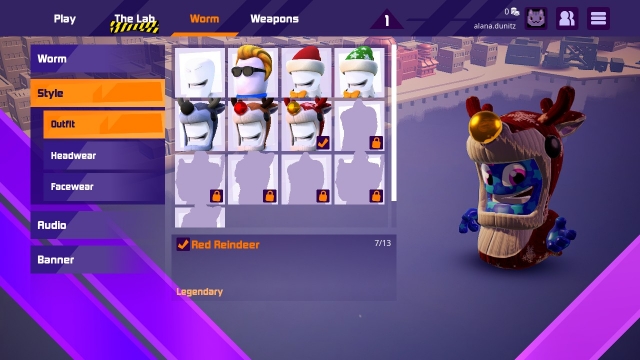 Worms Rumble features extensive customisation options for your worm. It’s not like in the older games where you just got to rename your team of worms and choose their accent. Here, you get to change everything on how your character looks. First off you can change the colour of your worm's skin: pretty much any colour you think of is here. I personally love the purple colour option. Next, if you find plain, solid colours boring you can add a pattern like stars to make it a little more unique and interesting. Round eyes, square eyes, angry eyes; it’s all here. If you want your worm to have a perfect white smile, super sharp teeth, buck teeth, hell make him look like he’s been in battle and has had his teeth knocked out! Thinking about it, isn’t it creepy for worms to have teeth? That actually sounds kind of frightening. Now that you have the basic look down, you've gotta pick his wardrobe. There’s a variety of hats and costumes with different themes to choose from. In the recent holiday season, you could dress up your worm as a little reindeer with a glowing red nose. For the final touch choose the accent and emotes then your worm is ready to go into battle. 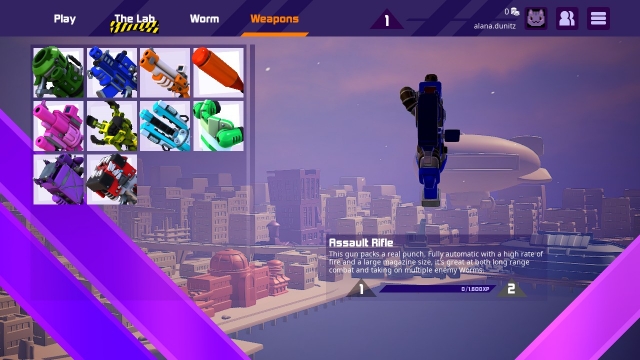 No worm is complete without his handy weapon, colour coordinated to match his outfit. Even your baseball bat can come in multiple colours. Shotguns, sheep launchers, rocket shields, sentry launchers, plasma blasters, and hammerheads are all available to have custom paint jobs. As you fight in matches you can unlock more patterns and colours for your existing weapons and unlock more weapons to make your own. If you are the type of person who loves to make things their own, you can spend a lot of time here customising everything. Especially since with each new event and season new options are always available to be unlocked, so you probably won’t have the same wardrobe for long. There are daily challenges posted to try to complete to unlock more cosmetic items for your worm if you want something new to add to your collection. 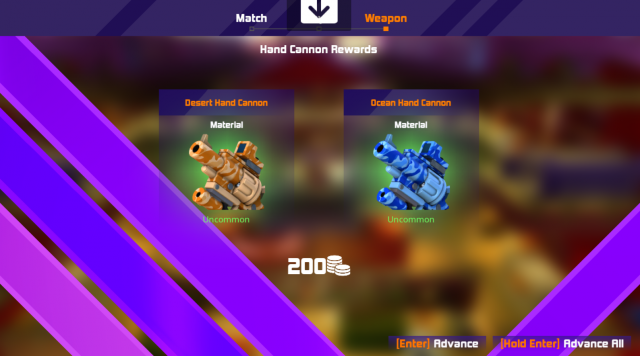 Worms Rumble is a fun game, but it doesn’t have much that keeps me wanting to keep coming back to play. I miss being strategic, the humour and using all the crazy weapons to take out my opponents. There’s nothing as satisfying as using the Concrete Donkey to crush someone, who thought they were safe by tunnelling. Or using the Ninja Rope to sneak up beside someone and put a mine on their head. If crazy, hectic action is more your style, then this game may be more up your alley. It’s definitely more of a run in guns-a-blazing type game than its predecessors.

Worms Rumble is a hectic, and chaotic real-time run-and-gun style game featuring the characters you love from the franchise. If you are looking for a game that feels like it’s strategic ancestors with a lot of humour, this is not the game for you.