There’s something inherently charming about rhyme; writers and poets all the way from Dr Seuss to Oscar Wilde have brought intrigue, rhythm and whimsy to their works with the power of a simple, matching word-ending. Now, Alterego Games is attempting to use the same technique in bringing to life its latest puzzle-based adventure, Woven. 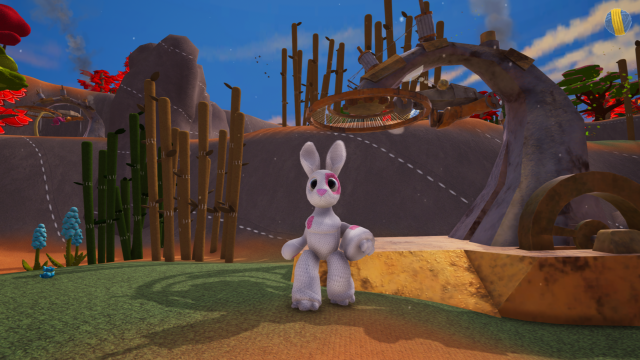 As with so many stories before it, Woven begins with an amnesiac protagonist: Stuffy, a woven (get it?) elephant who awakens to find himself alone in a vibrant but mysterious woollen world overrun by malevolent machines. Before long, Stuffy meets Glitch, a friendly robotic firefly who shares Stuffy’s lack of memory but has a unique ability to interact with the strange metal contraptions strewn about the world. Together, the duo will embark on a journey to uncover the mysteries of their past and reveal the fate of Stuffy’s home.

For the most part, Woven’s story is told in storybook-style rhyme by a soothing, ever-present narrator (voiced by David Seys) who also voices the cryptic audio logs hidden throughout each level. The rhymes —while sometimes a little forced— go a long way in giving the game a warm personality and helping to set it apart from the other family-friendly gaming adventures out there. Seys is deserving of praise here too for carrying the entire game’s story single-handedly, it really feels as if he’s sat next to you reading the 'Woven Storybook' while you see the events play out on screen. Unfortunately, a number of his lines are delivered without much emotion and his cadence often seems to ignore the fact that he’s rhyming at all. At its worst, this is a bedtime story told by your disinterested babysitter as opposed to a loving parent. 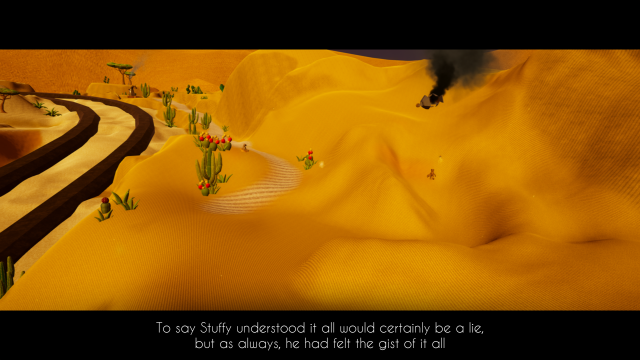 Every natural thing in Woven —except for maybe the water— is made from woven material of many colours. Despite this stylistic choice, every stage manages to provide a distinct environment with a new colour scheme and tone. It’s obvious that Alterego Games wants players to enjoy wandering around and soaking in the game’s world, and it does indeed look nice: the wild use of colour is refreshing and getting up close to any surface will reveal a detailed material texture, reminding you that the whole game is cloth-covered and stuffing-filled. It’s because of this enjoyable presentation that the clunky movement and traversal mechanics are such a disappointment. Slow movement makes travelling a chore, especially with frequent backtracking; the lack of a real jump mechanic makes traversing the levels tedious, forcing you to take the long way down from each level’s many raised areas; and it can often be hard to tell if a hill is scale-able or else hinting at an invisible wall —sometimes one section of a hill can be climbed up while another cannot. As if to add insult to injury, movement animations feel disconnected from the movement itself, giving the game an unpolished and amateur feel. The game teases you with colour and charm but makes the act of reaching its treasures a complete bore. Woven is light on gameplay, with no combat or platforming mechanics to speak of. What you will find here is a light puzzler that has Stuffy unlocking and swapping his own elephant parts for the parts of other animals (wings, legs, heads, etc.) to progress through the environmental, enemy and animal-based obstacles spread throughout each level. I call the puzzle mechanics ‘light’ because in almost every situation, the game will present an icon symbolising the exact ability required in each situation, meaning the puzzle’s main challenge comes in facing the backtracking required to reach the closest ‘animal transformation machine’ and select the appropriate body part. The backtracking isn’t usually that lengthy of a diversion, but it’s asked of you often enough to become a real frustration at times. There are also around 150 different material types to unlock for Stuffy’s skin, most of these serve no purpose and exist for collectible reasons only, but some are used to solve puzzles and unlock optional areas which adds some depth to exploration. Overall, Woven presents some interesting gameplay ideas, but its execution resembles a dull, extended game of ‘Simon Says’ in which you activate the exact abilities at the exact time you’re told to access the next equally challenge-less obstacle.

If the gameplay and world of Woven were all there was to experience, I would have struggled to even finish its five total levels. I found almost no joy in the mechanical repetition of navigating the obstacles and slowly shambling around each level. The only thing that kept me going with any degree of enthusiasm was the story, there’s something of a mystery surrounding the empty world and Stuffy/Glitch’s place within it. Answers are hinted at in the cryptic, rhyme-filled optional audio logs hidden around and of course eventually revealed throughout the game. By no means is the story going to win any awards, but it presents enough questions and gets you to care about the main duo more than you’d expect. I was conflicted by the end: on the one hand I was glad to be done with the puzzle-solving and world navigation, on the other hand there was a definite warmth in my heart for Woven’s characters, story and how the tale comes to an end. Woven is not a fun game, but it’s certainly a nice story. There are concepts —particularly the body-swapping mechanic— that could have been enjoyable with the right execution, but this game doesn’t even come close to pulling them off. Exploring the world is a nuisance too with the laborious movement and tough to navigate environments. Any praise earned by this game comes in its story and presentation. The continuous rhyming has the desired, charming effect and the vibrant use of colour is nice to see. It’s aimed at a younger audience but stands a good chance at boring younger gamers long before they reach the end.

Woven (Reviewed on Xbox One X)

Woven is not a fun game, but it’s certainly a nice story. There are concepts —particularly the body-swapping mechanic— that could have been enjoyable with the right execution, but this game doesn’t even come close to pulling them off.

It's a shame this isn't as much fun as it ought to be. It LOOKS awesome :(