Before you read this review, go and watch the trailer for this game. Once you’re done with that, come back here and tell me what in the world I was meant to expect out of this title. Did you guess “side-scrolling adventure game with a unique item management system, well-connected world, dialogue options, and a plethora of bosses that will test the player’s skill and patience”? No? Well, that makes two of us.

Even though I just listed off some of the most important details of Wuppo, I can easily say there are even more surprises right under the surface. Right after the first few minutes, the player is bombarded with lore about multiple races and a great war between them. This is mostly told through Film Strips, which are an item the player can view through an NPC that also explains the significance of each Strip. The next most prevalent way lore is explored is through dialogue from many of the characters you will encounter throughout the game. 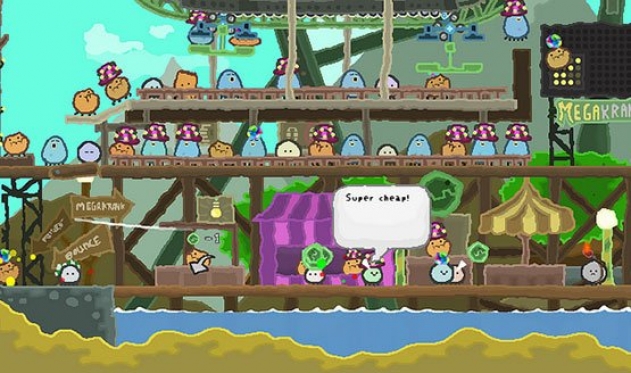 The world is full of ‘people’ to talk to, jobs for them to give, and items to collect for later use. These characters come from all the races and even include a few oddballs, including a parrot that accompanies you throughout your adventure. This bird-brain offers up advice about quests, tips on how to use certain items, and tons of tidbits about nearly everything in the game from facts about characters to warnings about dangerous areas. Most important is the help on quests because some of them can get fairly confusing. The best example I have would be when I was told to find a diving suit, yet I only found a way to buy it and simply didn’t have the large sum it would take to afford it. I spent tons of time trying to figure out how to get it without help and felt silly when I decided to listen to my feathered companion.

One of the most interesting mechanics in Wuppo has to be how the player character interacts with and uses items. For starters, you can only use one item at a time. It doesn’t matter what type of item it is, be it an equippable weapon/equipment, a healing item, or a single-use item like most of the quest items. This is because there is a small process that goes into using items. First, the player must go into their menus, then select the category for the item they want to use, then find the item so they can ‘equip’ it (put it on their head), so they can finally use whatever the item was. This can be done far quicker with button shortcuts that the player can set very easily, but it’s just as easy to accidentally unset them and they don’t work on items that must be used, picked up, then used again. Once an item leaves your inventory, the shortcut for that item is gone and must be given a shortcut again once the item is back. 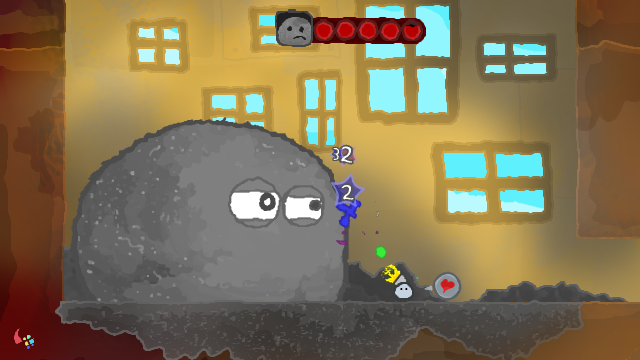 While I’m sure my explanation makes it sound like this is a huge pain, it’s really not that bad until you have to ‘quickly’ switch between any two items. I didn’t use any healing items simply because I got tired of dealing with shortcuts and having to equip the item each time I wanted to heal. On the plus side, the player can easily see what type of item each is and, once equipped, can tell whether it’s a passive equippable such as a helmet or an active item like a fishing hook or a gun.

Oh yes, remember those bosses I mentioned? These big baddies are what the various weapons found around the world will be used on. Whether it’s a huge fish that jumps all around or a rectangular stone slab that can instantly kill the player if it falls on them, the bosses in Wuppo all provide unique challenges. Whittling down the massive health bars of these behemoths can feel overwhelming when first learning their patterns, but once those sequences have been mastered, defeating these bosses feels especially satisfying. Another notable feature of Wuppo’s bosses comes in the form of unique ways to defeat them. For example, there is an item you are given that seems to only serve a purpose during a short event sometime into the game. Turns out this device can be used to make short work of a boss that needs whooping only a bit further on. 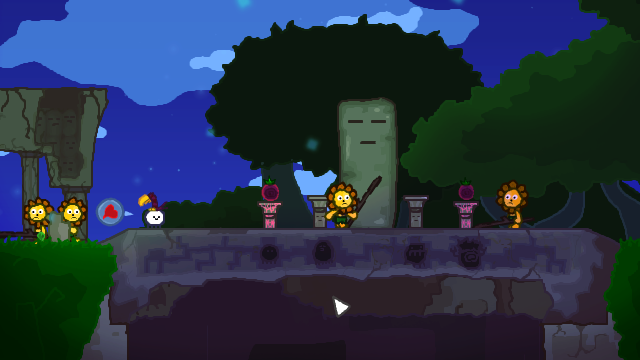 Rewarding the player by thinking outside of the box always excites me and I cannot stress enough how great it feels to discover unique opportunities like the one mentioned above. A separate aspect that I appreciate greatly is how well-constructed the world is. Originally I wanted to talk about this point due to how many ways one can get from some areas to others. For example, there’s a very early area with a small house. If you go a few screens to the right, you can find a way to go up a for a bit. Then, after some more exploring, you may find yourself trying to get back to that house. If that’s the case, simply jump down on any of the screens that don’t have a bottom and you will fall right next to the house within a few screens. While this is really handy to get around, it doesn’t hold a candle to Popo City. This expansive municipality holds tons of things to do and find, all confined in an area that begs for the player to poke around.

While I enjoyed trying to find as much stuff in Popo City as I could, it was here that I decided I simply don’t like the art style chosen. WIth such tight-yet-simple gameplay, interconnected areas, and the ability to compel the player to explore, I don’t understand why such an obnoxious style was preferred. I’m not entirely sure what I’d suggest for the game, but “Child’s First Drawing” wouldn’t even break my top ten. Although I dislike the art, I can’t speak ill of the music as it feels wonderful and nails the mood consistently. Beyond all of that though, the game is still just fun to play with rewards for players that think before they act and play smart. That’s the final thought I want to drive home. Wuppo, despite looking more than a bit silly, is a fun title that offers up a surprising level of depth and difficulty through its interconnected areas and bosses.

Wuppo (Reviewed on Xbox One)

With a distinct sense of humour and a few secrets hidden beneath its cutesy demeanor, Wuppo will surprise any player that hasn’t seen it in action before. This sense of surprise is consistent throughout and is only made that much better when bosses are introduced. Interesting areas with bizarre characters and tons of items to play with, Wuppo will keep you busy for a remarkable amount of time.