As a fan of the original game, I was both excited and apprehensive at the news that Firaxis and 2K Games would be developing XCOM: Enemy Unknown, a modern take on the original turn-based tactical shooter in which the elite forces of humanity struggle to stem the tide of a relentless alien invasion force.

It's best to make things clear at the outset; this is not a straight 'remake' of 1994's UFO: Enemy Unknown (also known as X-COM: UFO Defence and X-COM: Enemy Unknown), rather this is a 'reimagining' of the original. However, whilst Firaxis have not been afraid to make changes to the original formula, they have done an admirable job at keeping true to the spirit of the classic game.

At the heart of the XCOM experience are the tactical missions, in which you control a squad of up to six troopers dispatched to any one of a number of locations around the globe to combat the alien menace. There are a variety of different mission types, ranging from standard kill-everything-on-the-map type affairs to rescue missions and bomb disposal. Gameplay in these missions is turn-based and largely focused on exploiting cover and attempting to flank the enemy. Your troops are split into different classes such as snipers, assault troops and heavies and each can be outfitted and trained in a number of different ways to give them a unique role on the battlefield.

As troops survive missions and kill aliens they develop along a class-specific skill tree and you get to customise their skills and focus, leading to a deep level of troop specialisation and a wide choice of tactics on the battlefield. You could use the special abilities of your heavy to pin an alien down with suppressive fire while your assault trooper uses run-and-gun to sprint behind the enemy position for a free shot, or you could use your assault troop to fire a special shot to flush the same enemy from cover and have your sniper pick him off from overwatch while he makes a run for it in the open.

It won't be long until you have a nice group of elite soldiers with special skills and no doubt you will find yourself with a few favourites you love to bring along on missions. This is where XCOM's brutal nature will hurt you the most. The 'classic' and 'impossible' difficulty levels are extremely punishing and it is easy to fail at this level. Even at 'normal' difficulty, while you shouldn't have too much trouble beating the campaign, you will almost certainly lose a fair few men along the way (unless you cheat with game saves).

You can lose a trooper at a moment's notice through a single poor decision or through pure bad luck. My first real blow was when I lost Maj. Felix 'Tectonic' Lopez, who had been with me since the first tutorial, to a stray shot on his 11th mission. He was the first, but not the last, of my high-ranking soldiers who bit the bullet before the end-game and it never got any easier.

In between tactical missions you will spend time at XCOM home base, managing the construction of new facilities, undertaking research, constructing new equipment, managing your recruits, installing spy satellites and scanning the globe for alien activity. There is an awful lot to do in the base and whilst the game's tutorial phase does a good job at teaching you the basics it is very important to do a bit of exploration to make sure you are making the most of the options available to you.

Although the tactical missions are separate and distinct from base management in gameplay terms, the two are closely linked and the performance of your troops in the field, specifically the equipment they capture, has a direct impact on the options available to you at home in terms of research and engineering. As in the original title, research and engineering are the two keystones to successfully defending the Earth from the invasion force. At the opening of proceedings your troops are woefully under-equipped in the face of a far superior force, with conventional weapons and armour being less than efficient against the advanced technology of the alien forces. By capturing alien technology in a successful mission your science team can research advanced weapons and capabilities and your engineering team can begin constructing new technologies. The new equipment available can both dramatically increase both the quality of your base facilities and the survivability of your troops.

That's not to imply that the game gets progressively easier as you move forward, because that is simply not the case. In the early game you will be pitched against the weaker 'Sectoid' and 'Thin Men' enemies who form the initial scouting phase of the alien attack, but as you progress in your technological advances the invasion will also be stepping-up in force and you will continue to regularly encounter new and terrifying enemies throughout the course of the campaign. Usually they will kick your ass when you first meet them.

For the majority of a game of XCOM you will feel as though you are constantly on the defensive, as you sit back waiting for the aliens to make their next move so you can mount a frantic and hard fought defensive action to push them back. As in the original game, late in the campaign there is a glorious moment (assuming you survive long enough) in which the balance of power shifts and you move from being constantly on the defensive to actively attacking the aliens wherever they are detected, blasting their ships out of the sky with your upgraded fighter craft and aggressively exterminating their ground forces with your most advanced troops and technologies. This is what XCOM does best; it starts you in a position of weakness in which you feel helpless and overpowered, forces you to defend yourself against seemingly impossible odds. It allows you to advance yourself, but gradually; so that you don't even realise things are improving until all of a sudden you stop and think to yourself: "Hang on, am I actually winning here?"

If you feel like taking the action online there is a multiplayer mode available where you and an opponent duke it out for domination of the battlefield. Each player gets a certain number of points to spend on units and can even have a mixed squad of XCOM troopers and aliens. As each troop type comes with its own strengths and weaknesses there is as much strategy in picking your units as there is in the battle itself. Playing with the alien forces also helps in gaining a better understanding of their abilities for when fighting them in the singleplayer mode. These matches are short, brutal and tactical but ultimately serve as a mere distraction from the single player campaign that forms the core of the XCOM experience.

Technically the game is very accomplished, with excellent graphics throughout both general gameplay and in cutscenes. Occasionally when troops are moving, when they kick down doors and as they smash through windows the camera will move from the normal top-down view to a third-person over-the-shoulder angle to give a cinematic feel to the action. The same third-person view accompanies combat actions on both sides and really serves to pull you down into the action. 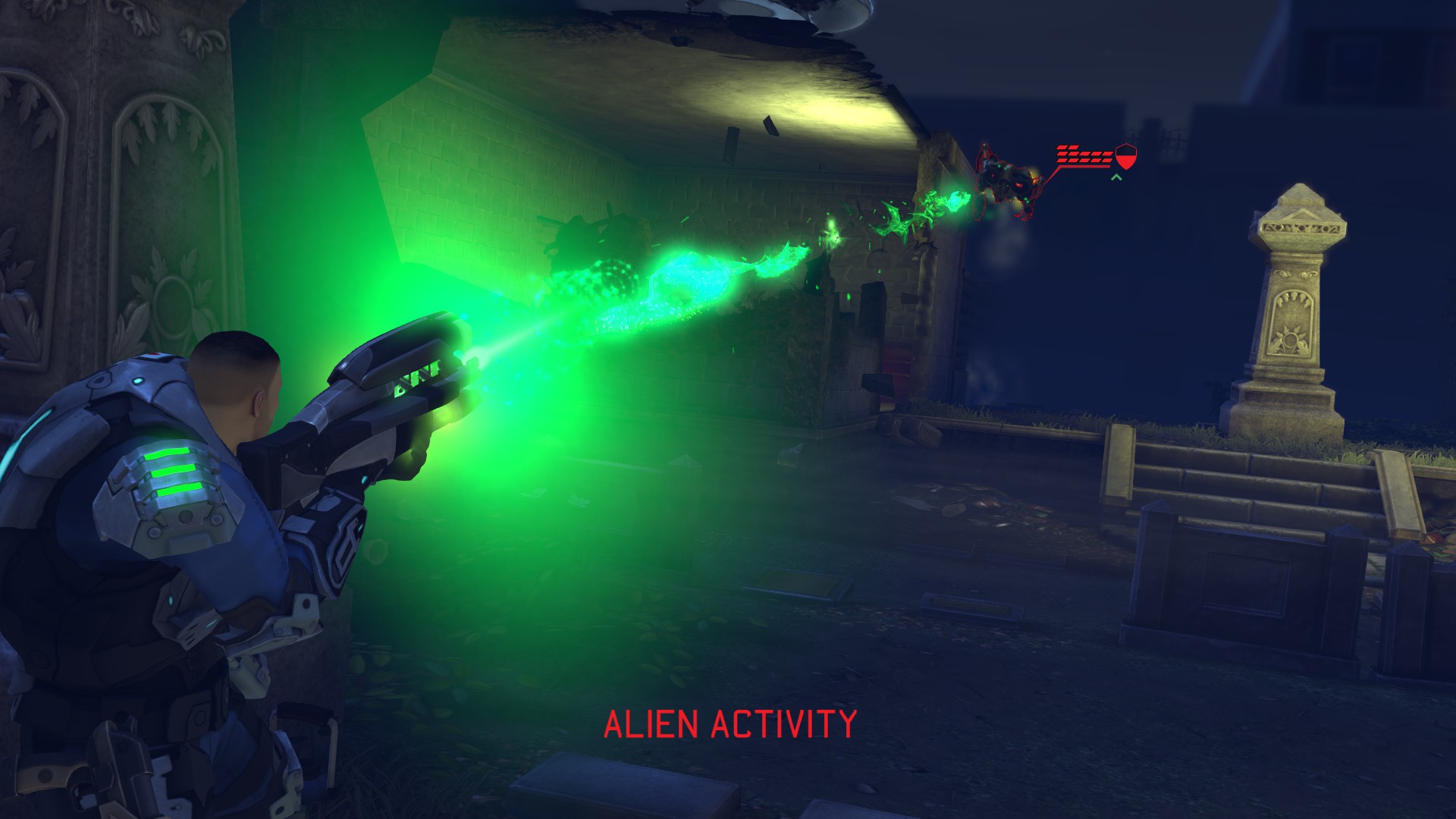 Sounds are equally well done with terrific voice-acting accompanying the cutscenes and excellent weapons effects and explosions. One thing that is a bit odd though is no matter the nationality of your troops (they come from all around the world) they all speak English with no regional accents. This can be overlooked easily enough but is a strange design flaw.

Unfortunately you may encounter a few glitches and bugs that can somewhat spoil the otherwise smooth experience. In my own campaign I experienced being shot through a stone wall several feet thick by an enemy that should not have been able to see me, nevermind shoot me. I also had an extremely powerful enemy disappear from the far side of the map to instantly reappear right in the middle of my men and had nothing but problems trying to assign my troops to a certain training program which kept wiping the first entry on a list of three.

Clearly designed with the console players in mind, the game functions extremely well using traditional PS3 and Xbox 360 controllers and proves that turn based strategy can work well outside of the traditional PC environment. PC users will find that certain concessions have been made in terms of the interface and the UI, but should still find the game more than functional and enjoyable to play with a mouse and keyboard.

XCOM: Enemy Unknown is a brilliant take on a classic game and one that should keep that vast majority of players more than happy. No doubt there will be some die-hard fans of the original upset that Firaxis have had the audacity to make changes to the original formula, but anyone approaching this title with an open mind will have a great time protecting the world from the alien menace.

As a fan of the original game, I was both excited and apprehensive at the news that Firaxis and 2K Games would be developing XCOM: Enemy Unknown, a modern take on the original turn-based tactical shooter in which the elite forces of humanity struggle to stem the tide of a relentless alien invasion force.

XCOM Making its way to Vita

Dont hate me but I have never played a Xcom game, Will check this review out when I get a moment :)

Dont hate me but I have never played a Xcom game

Yeah, Loving this game, finally have a bod able to mind control... then boom!! dead. i cried..

I've just started playing this, about 4 hours in and absolutely gutted when I lost my tutorial survivor, too. Bloody loving it though. Great fun, if not slightly terrifying when an alien gets too close and I've no moves left in a round.

I stopped playing after I lost my main Sniper (Me) :P. I quite like how connected you get to your players. It's something I think I would prefer to sit down and play for hours rather than something I can just pick up randomly though.

You can get this for £16 on GMG with a copy of NBA 2K13 as well, you know, just in case you wanted to play a shit game whilst you waited for XCOM to download. [url]http://www.greenmangaming.com/s/gb/en/pc/games/strategy/xcom-enemy-unknown-nba-2k13-pack/[/url]