On the 19th of August 2022, developer Pyramid Games released ZooKeeper— a simulator game in which the player builds and maintains a zoo, not unlike Zoo Tycoon (2013) or Jurassic World Evolution.

My first impression of the game was that the controls were unintuitive. I made my way through the tutorial but still had loads of questions about how to do basic things and no easy answers, despite the fact the tutorial was quite long. Simple concepts such as how to rotate an object that I wanted to place, or how to build a pathway, were things I had to discover for myself. For the longest time, I was issuing orders to feed each animal individually because the game did not present a clear alternative (turns out you click on the enclosure).

After sorting out the controls I proceeded to build a small park; as I was in the early parts of the game not everything was unlocked, though I was able to set up a Lemur enclosure. The game gave me the ability to bestow names on my animals. As such I took the opportunity to name my Lemurs, one was named Lois and the other Clark. 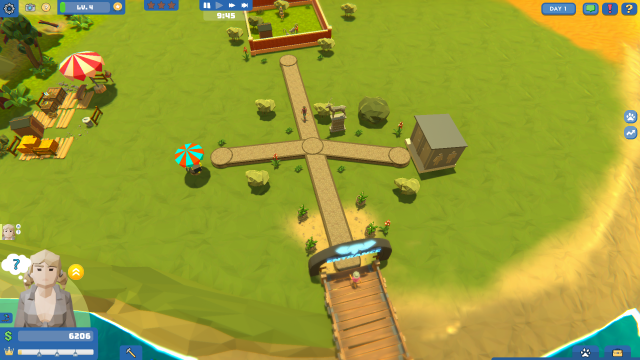 To maintain the park there are several factors you need to keep an eye on. The first is your employees, they need to be paid and can get overworked. The first employee available to hire in my case was a woman named Betty; according to her bio she prefers to work with big cats but all I had at the time was the Lemurs… too bad Betty. Next is the zoo's animals. If the animals need washing or feeding they will become unhappy — the zoo workers will take care of that when you give the orders. The last thing is the prices you set for the entry tickets and at kiosks throughout your park; your reputation will suffer if you set them too high.

Graphically, the game uses a pixelated art style, it is rather pleasant to look at and reinforces a sense of simplicity. The cute look is accompanied by relaxing background music, similar to what you would find in EA’s The Sims franchise.

Overall ZooKeeper presents itself as a calm and peaceful experience, but due to limitations in freedom, and a lack of intuitive controls, the game ends up being more frustrating than it should be. Pyramid Games is a smaller studio so comparing it one for one against games from bigger developers would not be fair. That being said, I still feel the game was not ready for the public when it launched. There are many basic, necessary elements required in a simulator such as this, and ZooKeeper fails at implementing most of them.

ZooKeeper is a charming game to look at with its pixelated graphics style. However, don’t expect top gameplay or player freedom from this zoo simulator. Its positives are equally matched by the negatives.

Explaining things thoroughly and also too much