Deadpool as a Videogame Character

What up, True Believers -- and those who hadn’t heard of the Merc with a Mouth until Ryan Reynolds posed in front of a fireplace! Deadpool is Marvel’s second most famous anti-hero, having appeared in tons of comics since his creation in the early ‘90s, a few animated appearances, and was name-checked in the movie X-Men Origins: Wolverine (because that was not him).

Why second most famous? The Punisher kills, and is therefore an anti-hero -- oh, you remember him now, eh? More movies, more animated appearances and a heck of a lot more comics since his creation two decades before Deadpool. Also many more games.

SKILLS: Shooting guns. Lots of guns. Like, hella guns. All. The. Guns.

For whatever reason, he never received a SNES game, so Deadpool has appeared in his self-titled game, as a boss in Spider-Man: Shattered Dimensions, and he also appears in several ensemble titles such as LEGO Marvel Super Heroes and Marvel Heroes. As a long time fan, of course I chose him as my first character...

But I’m getting ahead of myself -- there will be people reading this who don’t know who Wade Wilson even is! And are unable to pick up on simple context clues... (it’s Deadpool!)

As mentioned before, Deadpool first appeared in 1991, in issue 98 of the comic book New Mutants. He was a villainous mercenary sent to kill the teenage heroes who made up the team, and their mentor/leader Cable. They clashed several times, but the character proved to be popular enough to get his own limited series in 1993, and even a follow up in 1994. He then floated about the Marvel Universe through several titles and many storylines, and his backstory was explored a little more each time. 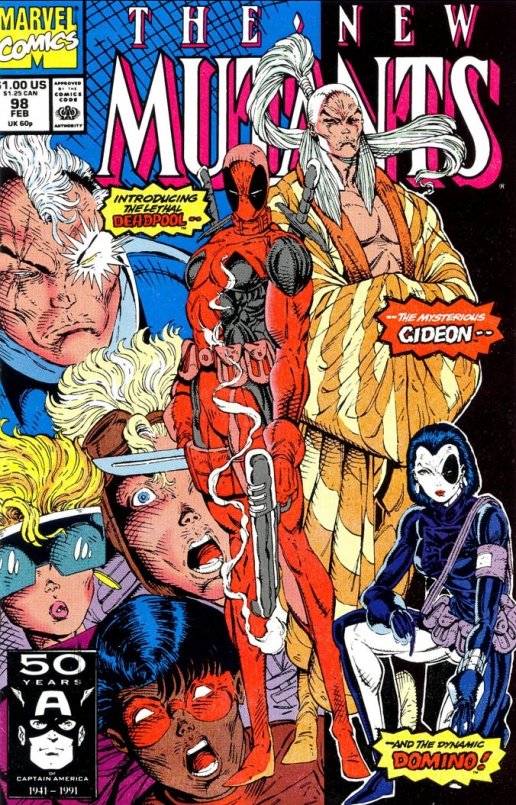 In 1997 he had the first issue of his very own ongoing title, which wound up running for 69 issues. He decided to become a hero -- he failed his way into it via much murder and mayhem, making more enemies than friends and even falling in love with the personification of Death herself, who it turns out loves him back.

Through all of those exploits, we learnt about Wade Winston Wilson, and why he became known as Deadpool. He was a mercenary who contracted an aggressive form of cancer, which would kill him in weeks. So he went to the Canadian government, or rather a secret organisation inside the government; Department K. A former member of Department K was the X-Man known as Wolverine, so that goes some way to telling you how positive an experience it must be.

Using a version of the aforementioned mutant’s healing factor, Department K enhanced Wade -- except it didn’t appear to work. So he was sent to a “hospice” to be experimented upon until he died. The guards took bets on who would die next, a so-called deadpool, and despite all odds being against him with his organs and skin being disfigured and destroyed by cancer, Wade was outliving everyone. However, he picked on the wrong guy far too often, and was left for dead -- which kickstarted his healing factor. Wade, moments before being beaten almost to death

After an ample amount of murder, he took on the name Deadpool and went into business for himself, getting a tech guy, weapons girl and the rest is history. I could go into exhaustive detail -- and did when I was keeping his Marvel Wikia page updated back in 2007 -- but that’s the basics.

He was always off kilter, but the horrors of the hospice and the damage the cancer did to his brain took a toll, making him seem quite insane -- due to insanity. He talks to himself, thought his friends didn’t mind near-constant abuse, died, became immortal, cared for his oldest enemy/best friend who was currently a baby, lived as a pirate, and eventually married Shiklah the monster queen of the Underworld (located in the sewers of New York). To say he has gone through some changes over the decades is an understatement, but his insanity has always been there. 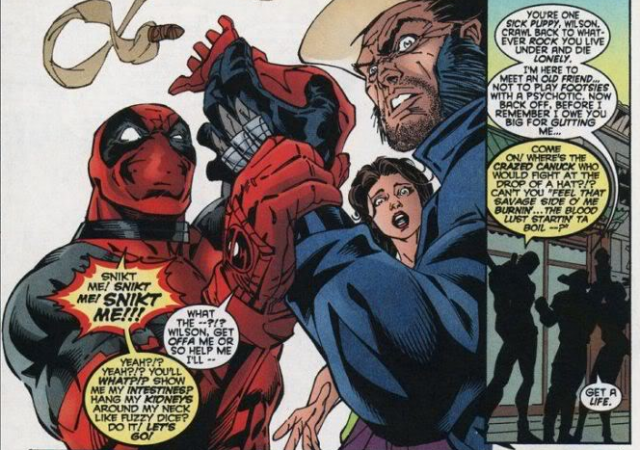 There are countless ninja who wish Wolverine had NOT snikt'd them...

It’s one aspect of his personality which actually works perfectly for videogames -- so long as you’re going for comedy, and not Call of Duty. His very own title was removed from sale six months after release, only to return 12 months later for PC and current-gen consoles -- funnily enough just as filming wrapped on the Deadpool movie, starring Ryan Reynolds. The story was basically an excuse to let Deadpool do a little tour of the X-Men corner of the Marvel universe, including interacting with Cable and Wolverine. It got a tepid response from critics, the gameplay was pretty generic for a third person superhero title -- tons of enemies, lots of fighting, often-poor camera. However, it perfectly portrayed his insanity. At one point he blows the game’s budget by wanting to redo the entire opening sequence because it was fun, for instance. 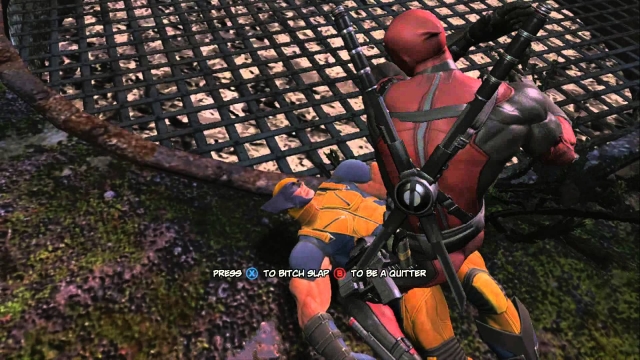 I won't pretend I didn't spend a good few minutes on this part...

If you’ve never played the free-to-play MMO, then here’s the basics: You have health, energy and a bunch of moves you can upgrade, controlled using the ASDFG keys on your keyboard (with controller support having just been added). There are some characters who don’t have energy, thanks to their 52 Review -- Hulk for one gets more energy the more enemies he beats, because he gets stronger the angrier he gets. Well, thanks to the 52, Deadpool now has no energy bar! He has an Awesome bar -- which is a picture of his symbol and never runs out.

Using him, there were times when I would be teleporting across maps and run out of energy and grumble. Now I don’t need to worry about that, as some of his attacks might have cooldowns, but he can teleport, slice and shoot with abandon! Though I also don’t need to teleport, as he has an awesome scooter, which he pulls out of nowhere (similar to Black Widow and Blade having motorbikes). His attacks have also been changed, with such things as a full-on tank cannon, a huge mortar and a Harley Quinn-esque hammer joining his repertoire of guns and swordplay. 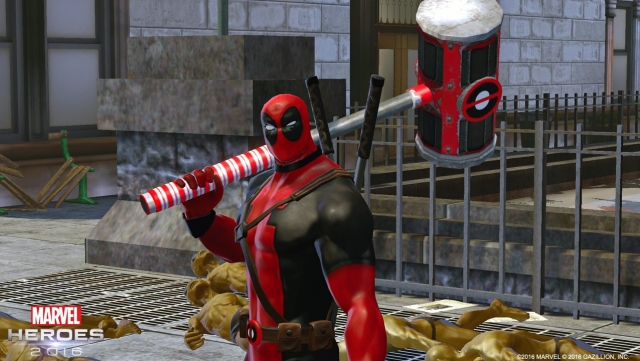 Although the comics aim to be moderately believable (yes, really), Marvel Heroes blows that out of the water, and that’s exactly what Deadpool should be. He quips about the other characters, complains to the player, asks whether he’s leveled up yet… Deadpool has always been self-referential and called out the reader or even the creative team themselves, and although gameplay-wise his very own title was flawed, I still feel that a sequel is worth pursuing. Maybe the Gazillion team can write it, and PlatinumGames can develop it...

Deadpool as a Videogame Character

It is the best funny game i ever played, It been a 2 years and i am still playing this. Awesome Graphics and gameplay. I Loved it.