The recent trailers for Star Wars: Squadrons have given us a much better look at some actual single player gameplay. Within them there are a lot of moments that showcase gameplay or story features, but they’re easy to miss.

Here we’re going to go through everything you can tell about the gameplay of Star Wars: Squadrons from recent trailers. Early in the trailer the narrator explains that the game’s story will be one of deep-seated rivalry. We’re then presented with a pilot being told to hunt down The Starhawk using Titan Squadron. The order is given to an Imperial pilot, presumably the one that players will be controlling in the story whilst on the side of The Empire.

The Starhawk is a project that the New Republic has been working on, and The Empire wants to destroy it. Intelligence has been gained from an agent inside the New Republic, giving the entire scene the same feeling as a Cold War movie. Given that the game is set towards the end of the battle between these two forces, it makes sense that espionage is the key method being used by both sides to try and outwit each other.

VR on and off This trailer confirms that everything in Star Wars: Squadrons can be experienced in full VR, or without. It’s great to see a new game launch with support for VR, but also allow those without the hardware to experience it for themselves. It shows that EA wants to make the game as accessible as possible, which hopefully carries through to all other aspects. 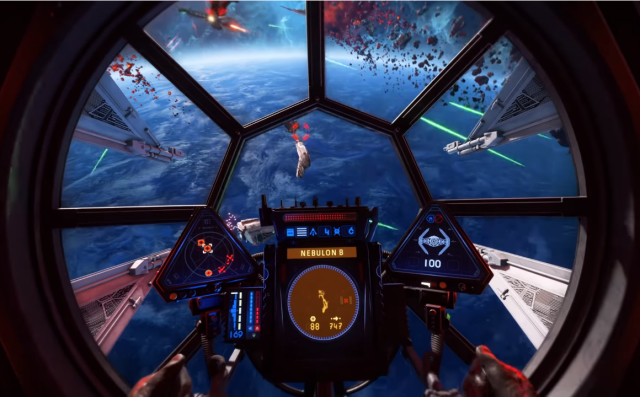 The main focus of the trailer is an early mission from the Imperial storyline. During this segment we see a pilot defending an Imperial transport that is extracting an intelligence officer. Of course, the New Republic comes along and sticks their noses in, and soon fighters are firing away in an attempt to take down the transport.

This is where we see the -flip and burn- maneuver. The Imperial pilot performs a perfect turn, almost on a single point, and starts flying at the New Republic forces that were just pursuing it. It’s an impressive move that I don’t think has ever been shown in the Star Wars universe before. Usually pilots move in a long arch in order to turn around, making them easy to follow, though this is with in-atmosphere dogfights.

In space, the physics of performing a perfect U-turn are a lot easier without air resistance and friction holding you back. I hope that we see more maneuvers like this that are only possible in space, because they’ll make the game that much more enjoyable. 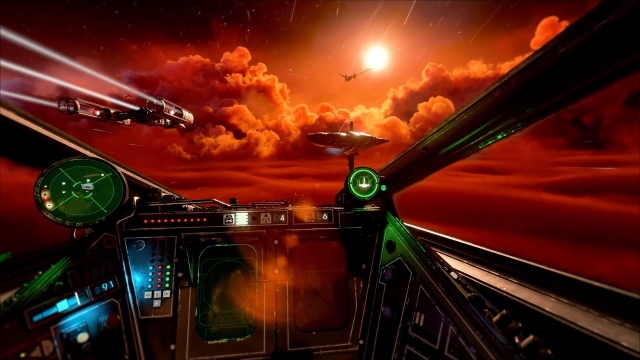 There’s a very brief clip from the cockpit of a ship with another in the distance. The reticule around the ship in the distance says follow. I have no doubt that this is an escort mission, but I can already see the twist Star Wars: Squadrons applies to it.

The ship is flying into an asteroid belt, a dangerous place for any ship. I think that this is a sign that players will need to learn how to move their ships perfectly in these scenarios. Whilst the game is definitely about having large scale battles in space, it’s also about flying with precise movements through tight spaces whilst you chase down a target at high speeds. This might be the most exciting part of the game that we’ve seen. Between missions you’re able to debrief with your fellow pilots, regardless of which side you’re on. This reminds me of being able to chat with everyone on your ship in the Mass Effect games.

I think that EA will have put together some interesting story tidbits for players to find if they speak to everyone between each mission. These might only be small pieces of story, but I’m sure that the game’s community will grow to love them.

People still talk about their love for the conversations in Mass Effect. As long as Star Wars: Squadrons has something close to resembling that, it should blow players minds when it launches.

Those are all the gameplay features that I could see in this trailer. I think EA did a great job of hiding the things they didn’t want players to see, but there’s still a lot in there for those who want to look for it.