Are you tired of trying to get in Rachael's pants? Is getting panties for Amy's Scavenger Hunt questline just a bit too much? Do you just want to see some genitals? Well, we've got you covered! House Party has a console command that lets you do just about anything with anyone or anyone with anyone! Okay, that wasn't very clear...

With console commands, players will be able to take complete control of a lot of different aspects in-game, including getting every character naked, sex scenes with anyone (aside from the Game Grumps and Doja Cat, sorry!), and making characters fight. Without further ado, let's get on to it!

The order in which we'll be talking about things, in case you want to skip ahead! 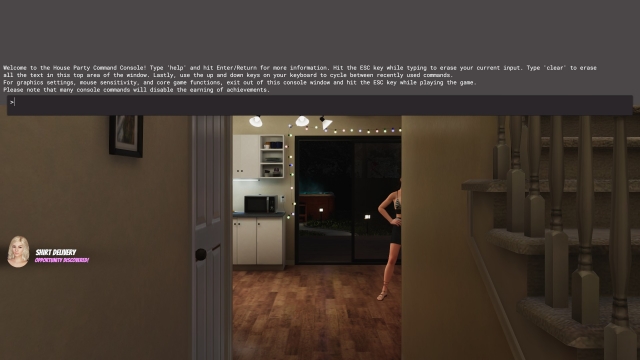 As far as console commands go, House Party has some of the more comprehensible ones. That said, there is still a bit of complexity (especially for console command newbies) that I want to clarify as much as possible. Usually, a command will look like this:

To make this more comprehensible, I will be using different formats according to which things you can or can't edit, like so:

So to explain, underlined parts of a specific command can be changed, while bolded ones cannot, and those within a parenthesis fit a pre-set list of options. Another thing I'd like to mention is that commands oftentimes aren't case-sensitive. To better reflect this, I changed between using capital letters and not for different commands in the article. 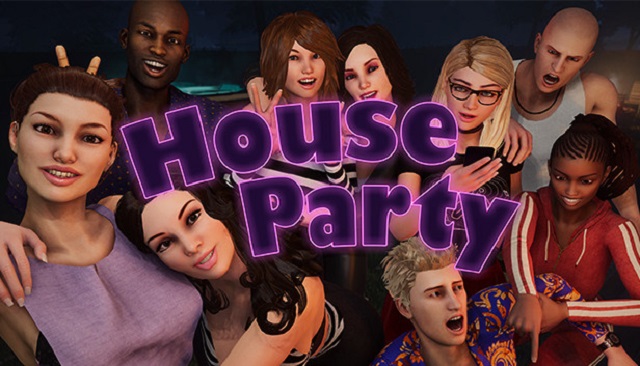 Instead of putting the character list under every command that is relevant, I'll be putting it up here for ease of access. Not only will it make the article shorter (because adding a list is too long), but adding the list will also make it redundant with one already present in the article. 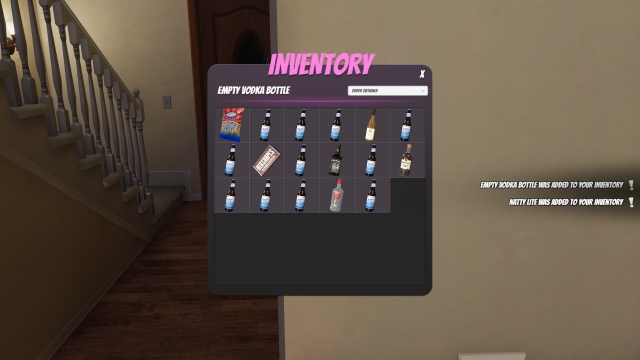 This command is most useful for completing quests by giving yourself items that you may not have been able to find. Although you're adding items to your inventory, it isn't spawning them; you'll still have a limited amount of Natty Lites to give.

Replace item name with the item you want in your inventory; generally, you can use this command to steal booze from Frank's cabinet. That said, sometimes it seems a bit glitchy (like, for instance, inputting "natty", "lite", or "beer" gives random items), so you'll have to experiment to get it to work. The item name section only receives one word at a time, so try using different words within the item you want. When it comes to Whack Spankiel's, you'll get the item by typing spankiel's.

The most reliable way I found to get beer is by using HouseParty.lite, because HouseParty.natty gave me Chardonnay... 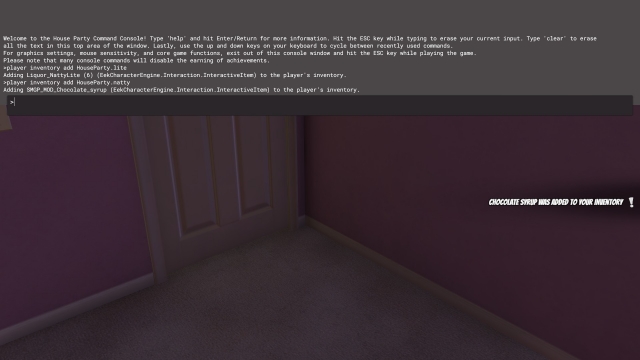 You can also use another command to stick an item on a character. This command is very buggy, and you can only attach it to their head, right hand, and left hand. This one's incredibly buggy because the same problem occurs as above: the game doesn't understand what item you're talking about. I realised it went wrong after Ashley got attached to Katherine's head, and she just moved and flew around wherever Katherine looked... Instead, use this one to put on the glasses on anyone for any spectaphiles out there. With this command, you can start and complete any of the quests in the game. That said, in my couple of testing sessions, I could not use this command as I had hoped. When automatically completing any quest, you cannot reap the benefits. For example, automatically finishing Derek's "Memory Lane" quest won't lead to the sex scene in the laundry, locking away whichever scene you'd like to unlock with a particular character. Regardless, here are the two commands you can use; feel free to experiment around and let me know in the comments if you get any success!

Whenever using an item that has several words within it (such as quest names and locations), they must be encased in quotation marks for them to work. 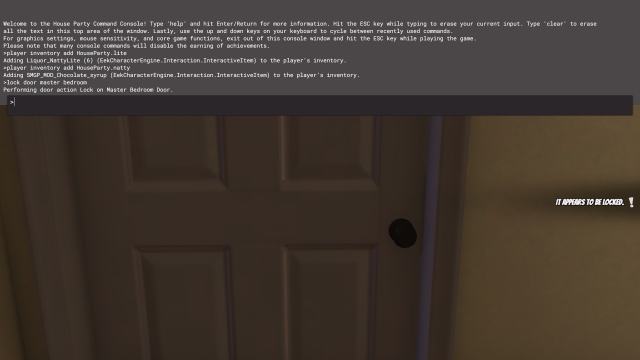 The master key is ~

To get the name of each door, walk up to it and see what name it has. All of the doors are:

This list will be used with other commands in the "Movement Commands" section.

If you lock yourself away, use the same command, but replace "lock" with "unlock". 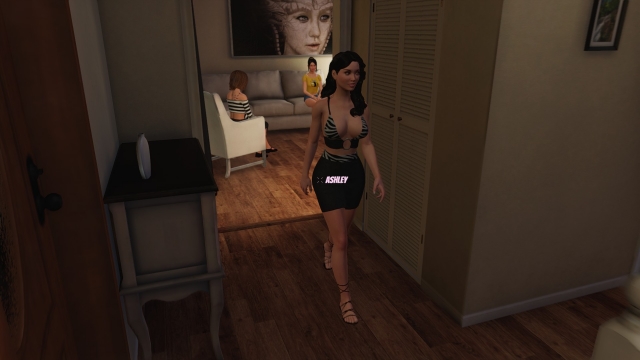 Where ya goin', Ashley?

Want to be alone with a character? Movement commands are your friend!

The first command we'll be talking about (WalkTo) is helpful to make a character go to a specific location. This command is quite simple to use

Meanwhile, the WarpTo command is for those that are lazy about waiting for the character to arrive. 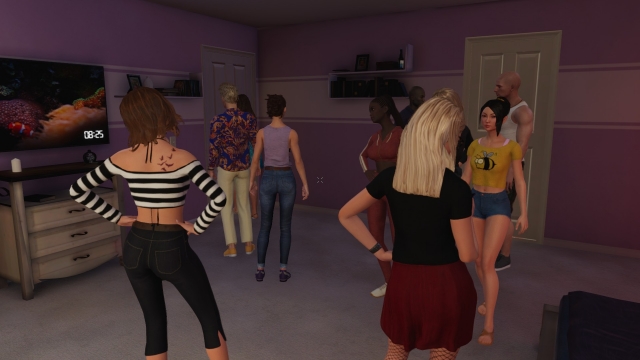 Finally, the roaming command will help you make sure that no character moves out of their position. Doing this will stop them from ever moving from their position, allowing you to set them in specific rooms. Mixed with WalkTo and WarpTo, you can make sure they stay in a particular place. 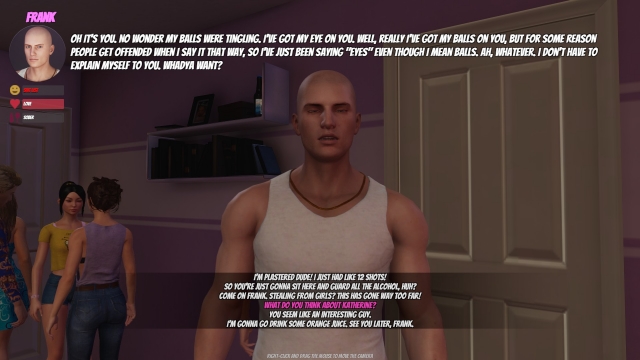 Full lust, full hate? Been there!

The Social command can increase your social relationship with every character in the game, both friendship and relationship. Although it's useful to allow you to ask them to go to a different room with you, it won't unlock their intimacy options, even when completing it alongside their related quests. For example, I finished Ashley's "Smooth Operator - Ashley" quest and raised her relationship and friendship with me to the maximum, but it didn't unlock asking her to go upstairs to "see her room".

Regardless, if you want to do the command, it goes like this:

Feel free to experiment and let me know in the comments your results! It's time we get into some of the raunchy stuff! This command will allow you to make most characters (excluding Arin and Dan) nude.

0–6 chooses the item the character will remove

Example: clothing madison all change off 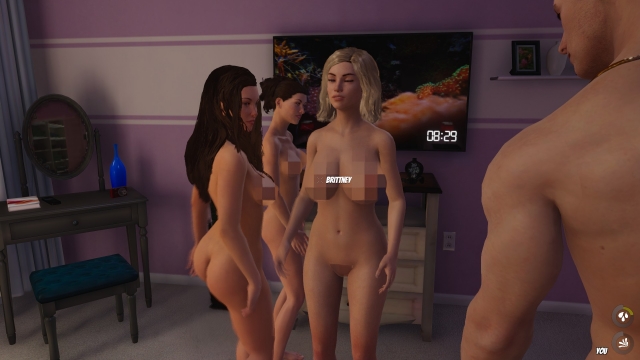 Okay, so you got Madison nude and she started covering herself? Yeah, same! That's because her exhibitionism level is low, so she's not actually happy to be nude in front of everyone. Thankfully, there's a command to change this, too! 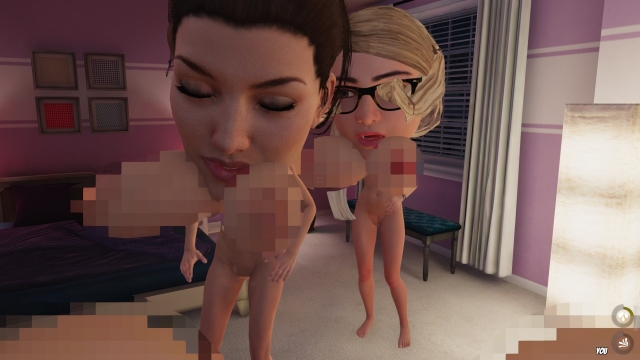 This isn't even my final form.

Are Brittney's honkers too menacing? Are Amy's tatas underwhelming? Did you want Patrick to be telling the truth when he tells the myth of the legendary brah that hid alcohol that has a horse-sized peepee? This is the command for you! After getting everyone naked, you'll be able to see what adjustments you'd like to make. Sure, it doesn't work flawlessly, but neither do implants, and we're still using those! 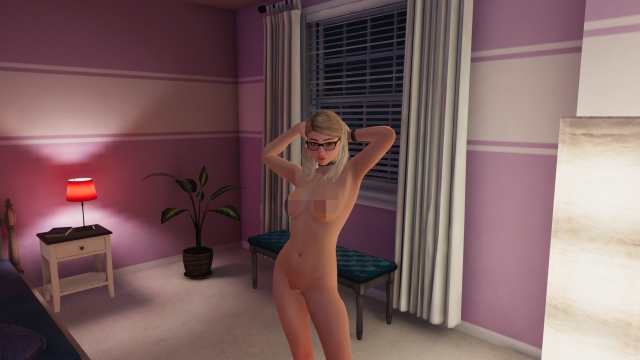 I had to remove the gargantuan heads for this one... it wasn't obvious what was happening otherwise.

Do you want to take a group photo of all of the characters? Or maybe you just want a specific character to do a pose for you; either way, the pose command is for you!

The pose command has different values according to male and female characters, so you can't make men pose the way women do, and vice versa.

(pose number) can be replaced with numbers 1–45 for female characters and 1–27 for male characters. Experiment around to see which pose you want to use!

Alternatively, you can have the characters cycle through all of the available poses by using the following command:

It's worth noting that the pose test command will cycle them through all of their poses, but they won't be in numerical order. I can't really explain what's happening. Or, rather, I don't want to.

With the command above, the player will start intimacy with derek using the sexual act 10052, which is cowgirl (cowboy?). The command to have sex with characters is:

If you want a character to have a solo session, you'll want to do it like so:

Finally, if you want to have two characters have sex with each other, you'll need to make the command like so: 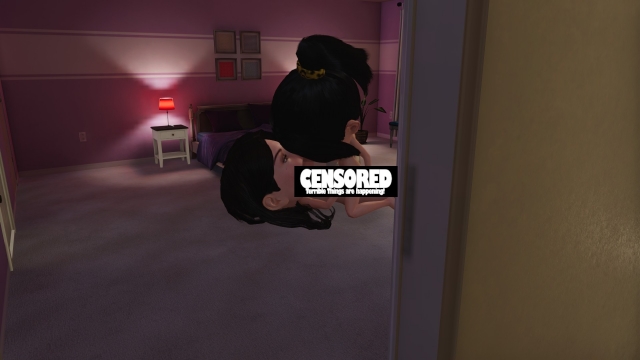 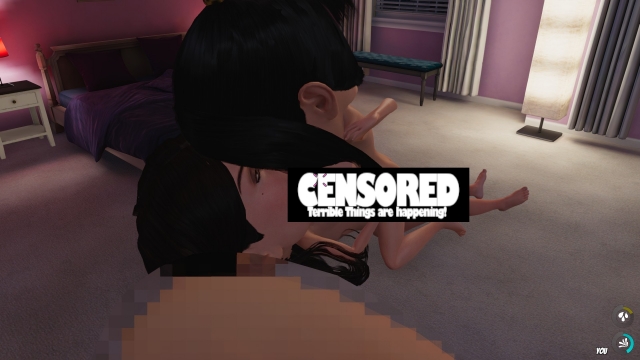 I just couldn't help myself.

Have you been waiting way too long to have sex with Katherine and just couldn't hold it in for very long? Yeah, that happens when your orgasm sensitivity is set to 9! Although that's a joke (as far as I'm aware, the orgasm sensitivity doesn't change on its own), you can adjust how fast your character orgasms through intimacy.

Setting the OrgasmSensitivity to 0 will make it so the player character never orgasms. This makes it so that you can have sex eternally because, when the character you're having sex with orgasms, you continue going regardless. 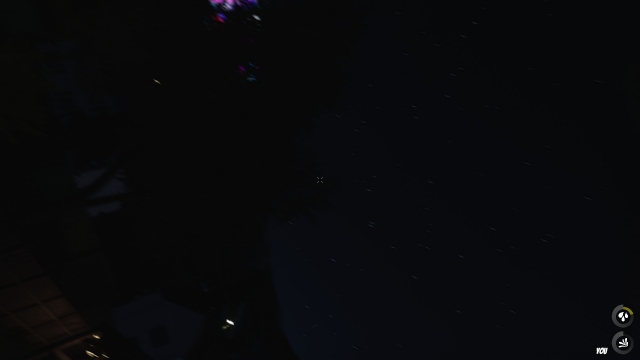 So, I'm SUPPOSED to be inside the house, but I put my drunk level past 100.

If you want to get drunk without having to consume any of the alcohol at the party, all you have to do is use this command:

Okay, technically, that number can go up to 100, but I sincerely do not recommend it! I was unable to reduce it from 100 and had to restart the run due to it. Talking to Frank at any level above 7 will lead to him beating you up. 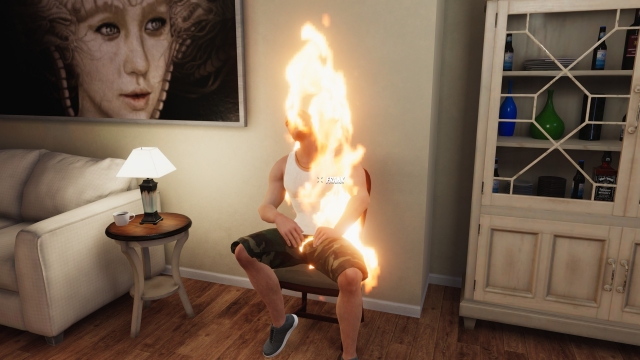 Sweet revenge for every time you've beaten me up, dood.

So you spoke to Frank above a 7 and want to get some revenge? I've got just the command for you!

The burning state very quickly puts the character into a passed-out state, which you can use on Frank to raid his booze cabinet or take back items that you gave him (like one natty lite or the camera). And — just like you should do to your browser history after every questionable session — it's time to hide the evidence.

That's it for all of the cheat codes available in House Party! I'd ask which one you intend to use the most, but we all know the truth... it's the lock command! It's so fun to lock and unlock doors!

Which Characters are the "Easiest" in House Party?

House Party — Main Differences Between Male and Female Playthroughs & Which One Should You Start With?