After my recent trip back to the irradiated outback this September, I, almost in a trance, found myself booting up Mad Max again the next day. Before I knew it, I was bashing War Boy skulls in and blasting across the orange sands. I was back on the fix, and there was only one goal in my mind after looking at the car I currently had:

Get the best V8 engine in the game.

I’m trying something new with this series, something along the lines of the Metro Diaries written by Andrew, only not exploring the main story of Mad Max, but rather documenting the journey I have into a long term goal: installing the Ultimate Big Chief V8.

If you know anything about the game, you’re probably aware of how much time this may take. Not only does this mean that you’ll be spending some good hours clearing away red objectives to reduce threat in areas, it’ll also take a large bit of scrap to get done. Of course, as I’ve cleared all of the main story quests and have invested in my ally strongholds, scrap won’t be as hard to come by as before. But it’ll still be a challenge for me to get done, and hopefully entertaining to read as a diary of my exploits.

It’s a tough road, but one worth riding.

So, after spawning outside a defeated yet still outrageously colourful Stank Gum stronghold, I tweaked my Magnum Opus slightly, getting rid of the boarder spikes (the added speed from the reduced armour meant enemies wouldn’t be trying to jockey me as often) and making it more pretty in general. I went for the Wild Hunt car body, as it was based off Max Rockatansky’s own Pursuit Special (also known as the Interceptor). I already had a smaller V8 on board, as well. 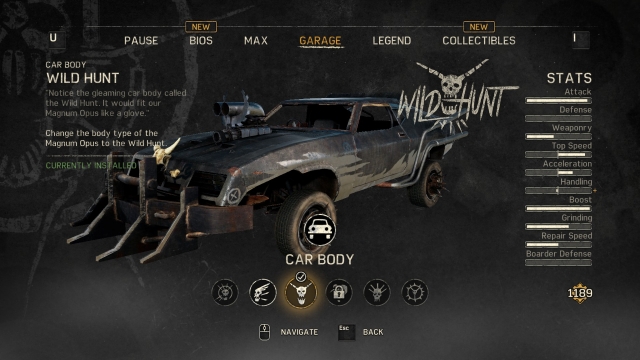 After some fiddling, I was about ready to set off, with only one real problem: where do I start? I decided to simply set off and see where the wind takes me. Unfortunately, I was almost immediately accosted by some unsavoury drivers on the road. 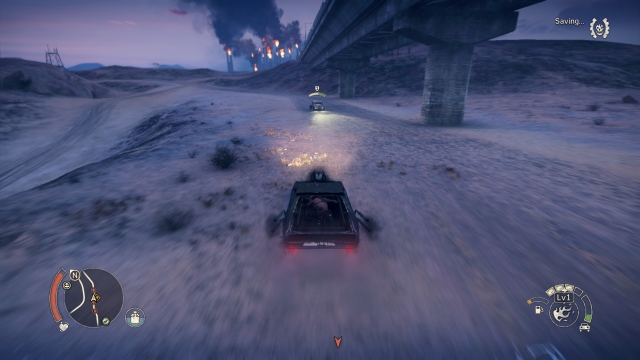 Early level, this is not as much of a problem, but not only was I rusty on how to take care of armoured vehicles, they were also just harder to destroy in general. This chase in particular lasted a good few minutes, and I crashed a rather embarrassing amount. My shotgun was almost useless against these guys with their increased armour, so I baited them out on foot and beat them to death with my bare fists. Sometimes the best solution is the easiest.

I was back on the road after this, racing across the evening desert until I encountered a large metal scarecrow that had been erected by Scrotus, the chief warlord of the wasteland. Taking these down lowers the threat level in the respective region, and this was especially useful for me, as I needed lower threat levels to purchase my lovely new V8 engine.

After taking it down, however, there was an icon on top to let me know there was a piece of food I could loot for health.

I tried looking around for an entrance upstairs, but it didn’t seem like there was one (the only semblance of one I could see was completely blocked off). I needed health, so this was somewhat disappointing. However, I also needed scrap, so I decided to get back onto the road. I hesitate to admit that my cowardly mechanic is sometimes right. I climbed back into my Magnum Opus, and raced into the wastes yet again.

I could soon see another scarecrow, but a War Boy sharpshooter caught my attention quicker. Unfortunately, he was a lot faster than I was, and before I could get out my own sniper rifle to blast him out of his tower, he’d already pulled the trigger. Within a second, I was dead.

Not my best move.

I found myself at Deep Friah’s stronghold when I woke up, and took that as a sign to maybe get some focus on what I wanted to actually do. Scrap was my number one concern as the best V8 engine cost upwards of 4000 scrap. So, I located a nearby buried wreck to dissect for metal.

A Stank Gum goon had tried to paste me before but I’d beaten him to death, so I was free to tow the wreck out, which was buried under a decrepit old bridge and sank in horrid tar, presumably leaked up from the oil veins nearby. It took me a minute to figure out how it was I went about the recovery, but all it took was a bit of momentum and distance with the Magnum Opus to yank the destroyed machine out.

And before I knew it, lovely gold cogs spread across my HUD. Mine, mine, mine.

I looted everything quickly and set off, something else catching my eye. A camp, with scrap and gasoline. My car was running very low on the latter, so it was a timely find.

Of course, there were some Road Kill aligned squatters not very happy with my wanting to pillage their little home, and it took a minute to get rid of them all. But, Max needed that gas far more than they did.

Everyone having been rightly dispatched, I retired with a nearby gas can emptied into my car, and called it a day. A slow one perhaps, but baby steps are better than no steps.

Join me next time, where I decide to have a shot at one of Deep Friah’s missions. We’ll see how that pans out for me. 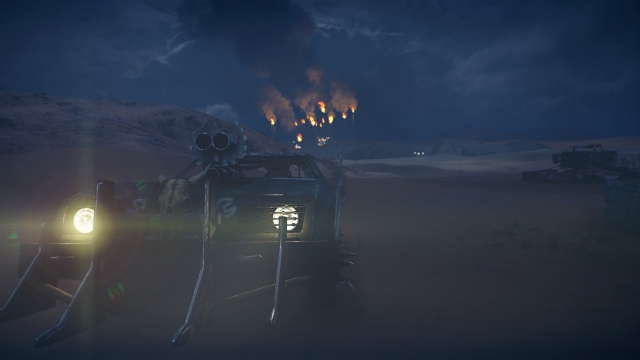