After completing my review playthrough of JFI Games’ Dusk Diver on PlayStation 4 I was wondering to myself, what is the point of the musou genre? I have this thought every time I play a musou game that feels like it wants to do something else. The first time I thought deeply about the genre was 2011’s Bleach: Soul Resurrección, a Warriors style game set in the Bleach anime universe. Why is this game in the Warriors style? What benefits does this game have for being in that style? For all my thinking on this topic both for Bleach and Dusk Diver, I can’t think of an answer I’m happy with.

When playing these games I always have much more fun fighting one on one versus bosses as opposed to the repetitive task of slicing up infinite amounts of emotionless dolls. This makes me wonder why games like this don’t follow the route of being a more character-based action game, fighting individual groups of more detailed enemies in a more spectacular fashion than merely mashing your way through thousands of objects.

For those who aren’t aware, the animated series Bleach is about a young boy named Ichigo who gets some kind of magical samurai, grim reaper powers and needs to save the innocent souls of the dead from the soul devouring hollows. During the series Ichigo and the supporting cast, all of which have their own unique combat style, fight enemies one on one in spectacular anime stand-offs. This game, that tells us the events of the series, surely would be much more interesting as a title similar to Devil May Cry or Metal Gear Rising: Revengeance than that of Dynasty Warriors and yet, you sit there, hacking and slashing your way through thousands of identical monsters. Dusk Diver isn’t based on any particular licensed property and stars Yang Yumo, a young girl who fights using the powers of martial arts she learned from watching too much TV. The game sees Yumo punching these identical monsters until everything on screen is dead. The mechanics of the game are fun but I keep thinking, what if. What if Dusk Diver instead of copying Warriors, played more like Batman: Arkham Asylum, a slower more cautious way of dealing with fewer enemies but in a more engaging way. What if it played more like Clover Studio’s 2007 title God Hand, still goofy but more focused on combos and implementing extreme super moves. My point is, why is the game in this specific combat style when the narrative doesn’t demand it.

Just to clarify my position, I’m not saying that the way the Warriors games are made is bad or that this particular type of game shouldn’t exist. The Dynasty Warriors games are designed perfectly for this kind of button mashing stress relaxant exercise and fills the extra space with strategy. Hyrule Warriors is the best of its genre and uses the same style of game to deliver exceptional Zelda nostalgia, absurd characters and a wealth of content, as does Fire Emblem Warriors. Even the upcoming Persona 5 Scramble looks to use the Warriors formula as a base and expands upon it with action stealth segments and 2D platforming interspersed with an engaging narrative.

Games like Bleach: Soul Resurrección and Dusk Diver however don’t fill the basic hack and slash gameplay with anything more interesting, it just allows you to pound enemies endlessly. When I pick up Dusk Diver I’m not finding a deep experience but I’m also not seeing the kind of goofy relaxant that’s present in Hyrule Warriors but a game that’s not adventurous enough to delve deeper into why it should be a certain genre. 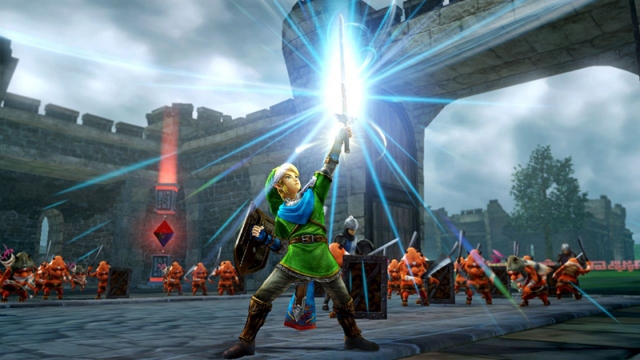 I don’t want to start throwing around baseless accusations but it seems to me that echoing the way Warriors approaches its combat and not experimenting in the same way as Omega Force feels very lazy. While both of the games I’ve mentioned are enjoyable experiences they both suffer when it comes down to repetition, something Hyrule Warriors doesn’t. Dusk Diver offers some fun combat that never wants to reflect deeper about what it could be. It is a game with boundless potential and lazily squanders it on surface mechanics. We could have had an absolute gem that engages you throughout your time with the game, for Bleach we could have had a licensed property that plays like the show feels. Instead we have two games that don’t do enough to fulfil their potential. They could be fantastic products that don’t simply ape another series style but sit atop the pile of action games as unique success stories but they don’t. These games are passable time-fillers but could be so much more. It’s just a bit sad.

Save Taipei, Taiwan As Dusk Diver Comes to Consoles