I’m of a sort that appreciates ‘live service games’ from a safe distance. While the ever-changing, constantly updating worlds of games like Destiny, The Division and Sea of Thieves are incredibly enticing as concepts, my solo comfort zone usually sees me squirreled away in a solitary corner somewhere instead of joining in with the online festivities. Call me a recluse if you like; I’ve come to terms with my preferences as a gamer, and—as a rule of thumb—those preferences generally exclude anything with seasonal events, battle passes and in-game currency.

Of course, there is a ‘black sheep’ of the live service game family, an oddball that, arguably, isn’t a live service game at all: Dying Light. Granted, it’s not massively multiplayer, but Techland’s open world, zombie-clobbering parkour title has been around for over five years with no end to its regular (and significant) updates, DLC, new modes, weapons and events. Even now, we’re approaching the release of yet another major piece of DLC, Hellraid. If all of that doesn’t qualify it as a ‘living game’, then I don’t know what does.

As an outlier among its massively multiplayer brethren, Dying Light was one of the few (possibly the only) live service games that resonated with me. It took what I appreciated about games like Destiny and wrapped it up nicely in a package that felt complete when experienced solo (although there are several PvE and PvP modes). Throw in some parkour, XP-based progression systems and a grappling hook, and… well, let’s just say that Dying Light was addicting enough to have me eventually resembling one of the undead during my first week or two of play. Revisiting Dying Light now, after several years of absence, was risky. Like tucking-in to a once-beloved childhood treat and finding that your taste buds have matured, playing Dying Light in 2020 could have soured the sweet 2017-2018 memories I held so dear. Open world games held more appeal back then; players weren’t quite so weary with the ‘Ubisoft formula’ and zombies… okay, zombies WERE still overplayed a few years ago. Regardless, was I going to be faced with the reality that Dying Light just doesn’t hold up in 2020? Thankfully, the answer is a definitive ‘no’.

Its story isn’t great, but it never was; the characters, bland and forgettable—nothing new there; however, when it comes to what made Dying Light memorable in the first place—the combat, progression and engrossing gameplay rhythm—the game holds up remarkably. Pounding the streets of Harran, leaping on (and over) zombies’ heads and caving their skulls in with the satisfying “thwock” of crowbar felt like coming home from a long, hard day at work and sinking into a hot bath. It was comfort food, violent and often rather challenging comfort food, but comfort food nonetheless. 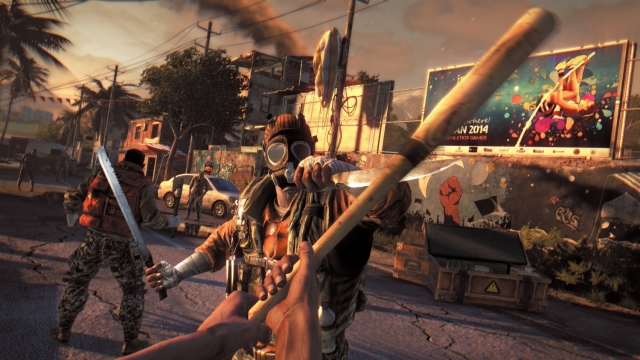 While its bigger brothers with more ambitious party sizes might enjoy more of the spotlight, something tells me Dying Light doesn’t mind; developer Techland is content with doing its own thing, not bowing down to ‘Games as a Service’ norms. The studio’s 2015 “#DrinkForDLC” campaign encapsulates this rebellious attitude perfectly and paints Techland as a studio with at least one or two clowns in its team. “Drink for DLC?” you ask, “surely Techland wasn’t encouraging players to get drunk?!”. No, not at all; the fine folks at Techland were merely encouraging the consumption of pure, innocent H2O.

There’s a storied history of energy drinks partnering with games for limited time promotions. Rockstar Energy for Gears 5, Mountain Dew for Modern Warfare and Monster Energy for Assassin’s Creed: Origins to name a few. In 2015, however, it was Red Bull’s turn to shack up with a videogame—namely, Destiny. While these beverage/game tie-ins usually come and go without much in the way of either fanfare or fan-fury, this particular instance came at a rather unfortunate time in Destiny’s history.

The game’s Taken King DLC was on the horizon and fans were rather—let’s say—ticked off at the hefty price tag attached to it (it cost almost as much as base Destiny at launch). Making matters worse, Bungie revealed that one of the DLC’s missions would only be available at launch to players who bought an eligible can of Red Bull for the redemption code inside. That’s right. Not only did Bungie demand that its customers pay £40 for the DLC, but they also locked one of its missions behind the paywall of a £1.50-ish can of caffeinated acid. Needless to say, people weren’t thrilled. How does this relate to Dying Light? Well, Techland responded to the Destiny controversy by launching a drink promotion of its own. Instead of asking players to buy a (relatively expensive) drink to access content they already paid for, Techland asked players to drink an almost completely free drink to access content they couldn't pay for if they tried. Dying Light fans were instructed to send photos of themselves drinking water to Techland via social media. As more fans complied, more free DLC would unlock for all players. This wasn’t major DLC mind, just a bonus quest, weapon blueprint and a couple of challenges, but it was a fantastic way to build the community and poke fun at the ridiculousness of energy drink/gaming tie-ins. 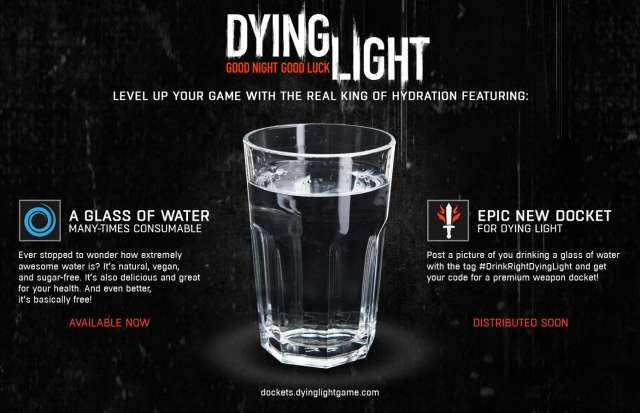 That settles it, Dying Light is one of my favourites of this console generation and Techland is a developer that very much gets my approval, so what’s next?

With Techland’s seemingly endless devotion to its fans and games, I’ve got no reason to doubt the quality of Dying Light 2. The studio appears to have its head screwed on right and a corporate vision that puts the player first (or at least, somewhere near the front). Plus, the original’s disappointing story—one of its most glaring flaws—has been acknowledged and is reportedly being addressed with new layers of flexibility to boot (player choice, anyone?).

With that said, I’m not foolish enough to give Dying Light 2 a 10/10 before it’s even released—anything can happen. It might be terrible; it might be made out of razor blades and brick every console that tries to play it. Whatever happens, though, I’ll always have the original. 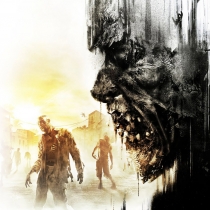