Back in 2013 the LEGO brand was on the top of the world. They had the LEGO Friends and Minecraft toy lines going strong, and would do for years to come, and it was launching the Galaxy Squad, Castle III, The Lone Ranger, Teenage Mutant Ninja Turtles and Legends of Chima lines, too. There would be multiple animated projects with both TV shows and direct-to-DVD movies, with an eye on The LEGO Movie the following year. It also had several videogames launching throughout the year: LEGO City Undercover, LEGO Friends, LEGO Marvel Super Heroes and multiple games based on LEGO Legends of Chima.

By now, even if you didn’t notice the title of this piece, you’ll have noticed that the brand was leaning heavily into Legends of Chima. While LEGO Friends did have a cartoon due out that November (coinciding with a 3DS game), Legends of Chima led the way by having a cartoon airing in January.

Of course, we can’t forget that LEGO City Undercover was the first LEGO game out that year. It launched in March 2013 for Wii U, becoming the first game using the “LEGO Star Wars” action-adventure formula that wasn’t based on a licensed property. It would be re-released on Eighth Generation consoles in 2017, but the main topic of this piece has had no such luck. 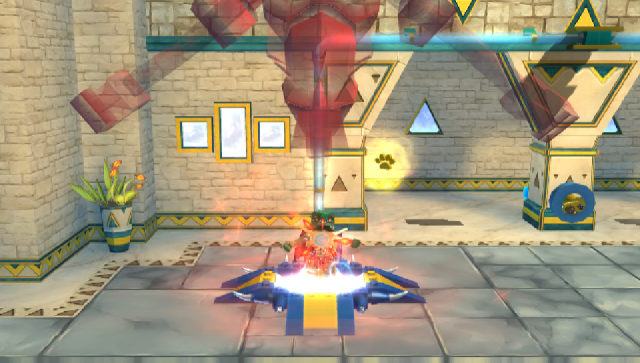 Now, there could be many reasons why LEGO Legends of Chima: Laval's Journey, the second LEGO game of 2013, has been forgotten. Well, along with the other games based on the playset; Legends of Chima Online, and the browser-based Legends of Chima: Speedorz, both of which also released in 2013. It can’t be age, as I still hear people talking about Bionicle which hasn’t had a game since 2006! Laval's Journey only has four speedruns logged at Speedrun.com to date!

Admittedly, I myself was only barely aware of Legends of Chima, because when I came across images of it I recalled seeing it on shelves in shops. I wondered why the new LEGO set was based on “What If The Thundercats Were Animals”. I didn’t watch the cartoon, and I didn’t play the games… But then Sony threatened to take the Vita store down. Curious as to what exclusives we’d lose, I went looking and spotted a LEGO game that didn’t ring any bells.

LEGO Legends of Chima: Laval's Journey was released in June 2013 for the Vita and the 3DS, with a DS version following three months later. Okay, I used the term “exclusive” loosely - it was a handheld exclusive. The plot is that Cragger is leading some of the tribes to assemble the Triple CHI Armour, which involves stealing parts of it from the other tribes. It’s up to Laval, prince of the Lion Tribe, to gather his friends and stop them, lest the balance of CHI in the world of Chima be irrevocably imbalanced. 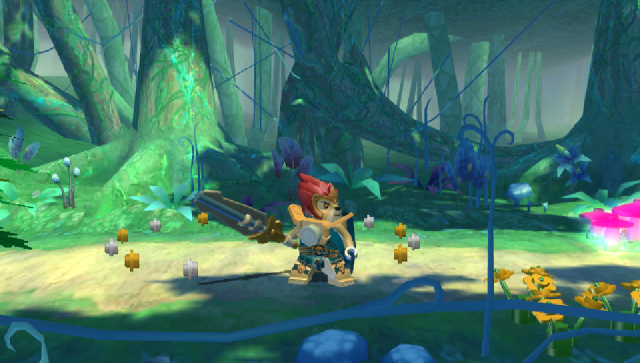 As you progress through the story you unlock new areas to explore, add characters to your roster, and fight plenty of enemies. All of the enemies take multiple hits to kill, which would be annoying if you kept getting overwhelmed with enemies like in some LEGO titles. Fortunately, the big battles are kept for the boss fights - though most of those are easy if you collected enough CHI orbs, and can use your limited-time power boost.

Much to my surprise, all three games are the same. I expected some parity between the 3DS and the Vita versions, but except for the graphical resolution it’s exact. They do have platform-specific things; the DS and 3DS versions both have the character selection and maps on the bottom screen, and the Vita version can use either touch surface to aim projectile weapons. But other than graphics, they’re the same game across the board! There are some effects that the DS just can’t do, so for instance it replaces some quicksand with a spike pit, and the hub worlds are more linear instead of fully free roaming, but you really only have to play one of these to experience them all. 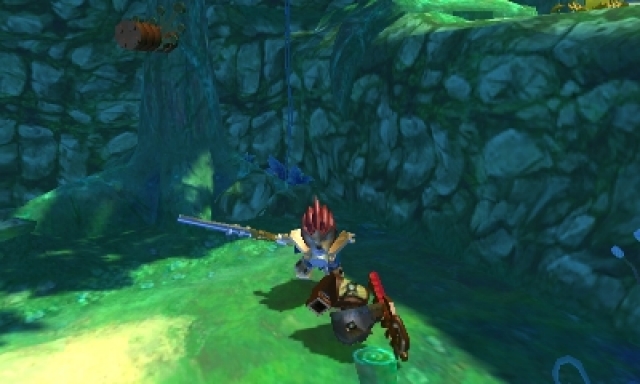 You unlock characters as you progress through the levels, and they each have abilities that you’re going to need. The gorilla can swing on parallel bars, the crocodile can swim, the eagle can shoot things with her laser… That sort of thing. However, you can find character tokens hidden in levels to unlock more of them - if you can afford them. Making money (studs) in Laval’s Journey is a slow process, and after buying a wolf and a bear, I had to work hard to get a ferret - they’re the only ones who can get into small spaces. Wolves dig and bears fish, in case you were wondering.

As I mentioned, Laval's Journey used the familiar TT Games action-adventure formula. The levels were large, the hub areas filled with puzzles to solve, and there were more than 60 characters to unlock! Sure, you don’t need the majority of them, but if you were a fan of the toy line or cartoon, I’m sure it was welcome. Since there is only ever one character on-screen at a time, you have to switch between them as required - with the added bonus that each character has their own health bar. In the grand scheme of things it doesn’t really matter - it’s a LEGO game so you just lose some studs if you die - but I liked the feature and wish that TT Games kept using it. 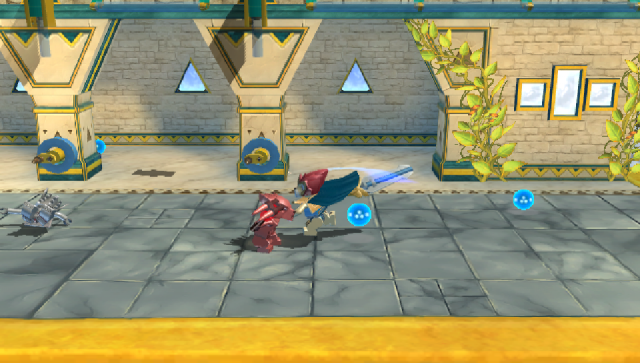 I’d also like to reiterate that the DS version is the same game as the Vita and 3DS versions. That astounded me, especially since TT Games chose to port the iOS/Android game LEGO Marvel Super Heroes: Universe in Peril to DS, instead of the console version of LEGO Marvel Super Heroes! If it came first, then I’d accept it as a necessary limitation, but no! It came out in February 2014 - a full six months after Laval's Journey! I’ll admit that TT Games would have had to cut down the New York hub into something more manageable, but to be fair the other handheld games were the Universe in Peril version, too.

Curious whether Laval's Journey tied into the cartoon, and being wholly unwilling to watch 41 episodes at 22 minutes each, I found someone on Twitter who had already watched them. So, a big thanks to BlazeWarriorWolf for answering my questions! But as it turned out, the plot is completely different. Cragger is brainwashed, but that’s the only similarity between the game and any of the three seasons of Legends of Chima. Eris doesn’t even carry a gun in the show! Okay, so the characters are the same, but that’s to be expected. 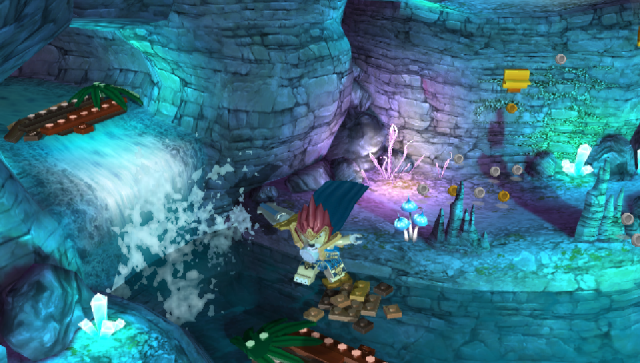 While I was pretty impressed with all three versions, I have to admit that the voice acting left something to be desired. From what I can tell the actors from the cartoon didn’t reprise the roles, so I’m sure that had something to do with it. I assume they were trying to sound like the cartoon characters - again, I’ve not watched the show - which may not have played to the actors’ strengths.

However, that’s the only negative thing I have to say about Laval's Journey. Each character type is unique, which means they are necessary because nobody doubles up. It’s annoying that you need to collect so many studs to be able to buy them, but it adds replay value to the game if nothing else. The levels and hubs are nice and big with plenty of puzzles and platforming, and there are loads of hidden areas. Some of the hidden areas even have hidden areas! I’ve really enjoyed exploring the hubs after completing the story mode. It even unlocked CHI Play - instead of freeplay - which refills your CHI meter so you don’t have to keep gathering CHI orbs. 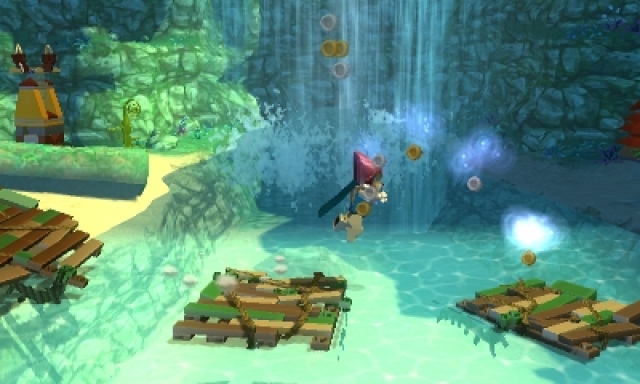 If this has piqued your interest in LEGO Legends of Chima: Laval's Journey, then you can pick them all up second-hand for less than £20 total. Expect to pay more for the 3DS and Vita versions if you buy them digitally, though. It’s more than deserving of being brought to the Switch, if nothing else, so that more people can experience it. Maybe LEGO could re-issue the brand for an anniversary?

i wish i wrote this well 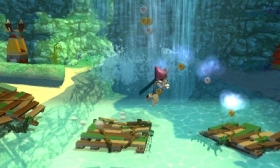